CHINA has confronted the US with fury after it sent a missile destroyer through the disputed South China Sea in a direct challenge to Beijing.

China responded by scrambling warships and aircraft to intercept the ship, which sailed within a dozen miles of the increasingly-militarised Paracel Island chain.

The South China Sea has become a flashpoint that experts have warned could spark a conflict that could spiral into World War Three.

China lays claim to vast swathes of ocean and many islands – but some parts are also claimed by the likes of Vietnam, the Philippines, Brunei, Malaysia, Indonesia and Taiwan.

America’s military presence and exercises in the area are a direct challenge to China’s claim, which Beijing has used to justify setting up military bases and even runways on the disputed islands. 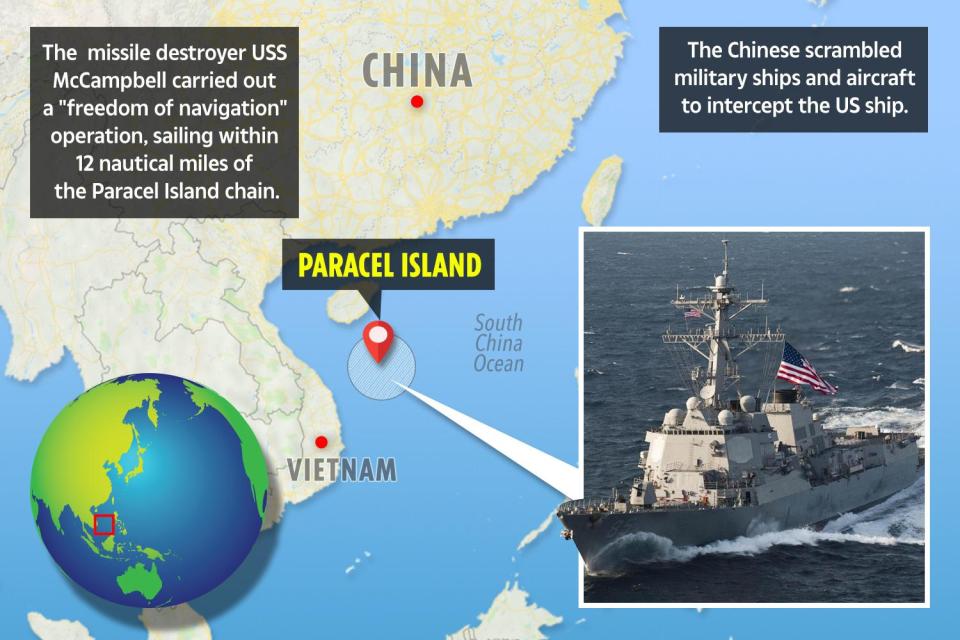 The operation was not about any one country or to make a political statement, McMarr added.

He blasted: “We urge the United States to immediately cease this kind of provocation.”

The move comes as US officials joined talks in Beijing during a 90-day truce in a bitter trade war.

Asked about the timing of the operation during trade talks, Lu said resolving issues would benefit the two countries and the world.

He said: “Both sides have the responsibility to create the necessary positive atmosphere for this.”

China claims almost all of the strategic South China Sea and frequently blasts the US and its allies for freedom of navigation naval operations near Chinese-occupied islands.

And experts have warned the area is now on a par with Korea as a potential flashpoint for conflict.

Gregory Poling, an Asia and maritime law expert at the Centre for Strategic and International Studies, told Al Jazeera in October: “There’s a whole basket of issues that could lead to a US-China conflict.

“The South China Sea is the thorniest. It gets right at the heart of US primacy in the region, the international order that Washington built up since World War II and China’s willingness to bully neighbours and challenge that rules-based order.”

If war were to break out between the two nuclear powers the consequences would be devastating to both regions.

Dr Brendan Taylor, Associate Professor at ANU Coral Bell School of Asia Pacific Affairs, argues Asia is at a dangerous crossroads and could sleepwalk into a global war like in World War 1.

China and the US have in the past repeatedly traded barbs over what Washington says is Beijing’s militarisation of the South China Sea by building military installations on artificial islands and reefs.

China defends its construction as necessary for self-defence and says that it is rather Washington that is responsible for ratcheting up tensions in the region by sending warships and military plans close to islands Beijing claims.

In the past tensions have become so high that one Chinese military official said US ships entering the region should be rammed.