Skip to content
Christians appealed to the Muslims to have respect for those of other faith; the Muslims responded with contempt. One Muslim, Abubakar Yusuf, declared: “We have now declared a jihad against them. We are not going to allow anybody to despise Islamic teachings at their church or crusade. We will seek revenge.” How did the Christians “despise Islamic teachings”? By preaching aspects of Christianity, such as the divinity of Christ, that Islam denies.

Buried in the concluding paragraphs of a Christmas Eve Washington Times report about Muslims in Uganda forcing Christians to convert to Islam was the extraordinary revelation that in that country, Muslims now consider any public statement of the Christian Faith to be a calculated insult to Muslims, for which they can justifiably exact revenge.

Allah is not the arabic word for the God of Abraham, Isaac and Jacob. The word “allah” simply means “the god”, a generic god of pagan antiquity who had no name other than the Moon God. So let’s get that straight right off the bat. Prior to Mohammed arriving on the scene, arabs worshipped about 360 different pagan idols, of which Allah was only one. Mohammed, when he created the religion of Islam, declared Allah to be the “one true god”, and taught that doctrine at the edge of a very sharp sword.

“Those who say: ‘The Lord of Mercy has begotten a son,’ preach a monstrous falsehood, at which the very heavens might crack, the earth break asunder, and the mountains crumble to dust. That they should ascribe a son to the Merciful, when it does not become the Lord of Mercy to beget one! “ Qur’an 19:88

“Seeing then that we have a great high priest, that is passed into the heavens, Jesus the Son of God, let us hold fast our profession.” Hebrews 4:14 (KJV)

Not only that, but Muslims get very angry when you say that Jesus Christ is the Son of God. Why? Because the Qu’ran states in multiple places that Allah has no son, and they are right. Since Allah is a pagan god that doesn’t exist, it would be impossible for him to have a son, or anything else for that matter.

“Concerning his Son Jesus Christ our Lord, which was made of the seed of David according to the flesh; And declared to be the Son of God with power, according to the spirit of holiness, by the resurrection from the dead:” Romans 1:3,4 (KJV)

But how about you, Christian? Will you stop telling people that Jesus Christ is the Son of God just so no Muslims might get offended? Christians are called to be salt and light to a lost and dying world, and part of the light is declaring exactly who Jesus Christ actually is, no matter the cost. Think about that in 2019, then go out and do something about it.

CHRISTIANS, STOP SAYING JESUS IS THE SON OF GOD. IT PROVOKES MUSLIMS

FROM FRONTPAGE MAG: This is, or should be, sobering news for the comfortable Christians of the West who have made an idol out of “interfaith dialogue” and fastidiously avoid saying anything remotely critical about Islam, even as the Muslim persecution of Christians continues worldwide.

“In June,” the Times reported, “a group of Muslims attacked Christian preachers in eastern Uganda during a ‘crusade,’ where Christians publicly profess their faith and invite others to join. Muslims in the town accused the Christians of mocking Islam by publicly saying Jesus was the Son of God.” 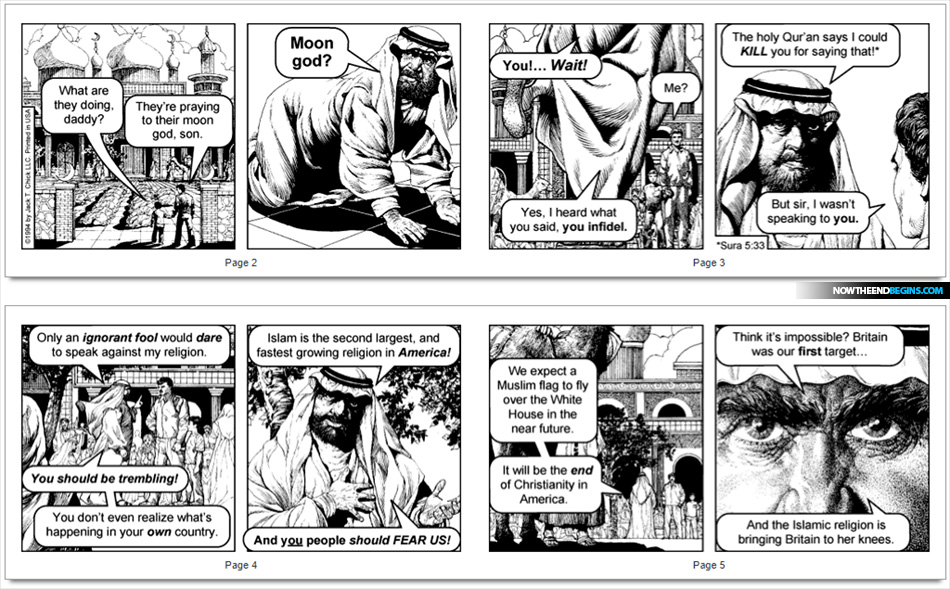 CLICK TO READ THE CHICK TRACT CLASSIC “ALLAH HAD NO SON”

The Christians appealed to the Muslims to have respect for those of other faith; the Muslims responded with contempt. One Muslim, Abubakar Yusuf, declared: “We have now declared a jihad against them. We are not going to allow anybody to despise Islamic teachings at their church or crusade. We will seek revenge.”

How did the Christians “despise Islamic teachings”? By preaching aspects of Christianity, such as the divinity of Christ, that Islam denies. The Christians, knowing how delicate their situation was, would never have dreamed of actually saying something critical about Islam itself; but to the Muslims who heard them, just enunciating the tenets of their Christian faith was criticism enough. And they refused to stand for it.

A few years ago, when jihadis attacked AFDI’s Muhammad Art Exhibit and Cartoon Contest in Garland, Texas, some Christians castigated me for co-sponsoring and speaking at the event. They said that Pamela Geller and I, as co-organizers of the event, were being needlessly provocative, poking Muslims in the eye, goading them, etc.

These charitable and enlightened Christians said that Christians should instead be deferential to others’ religious sensibilities. At the time, I responded to these people by explaining that giving in to violent intimidation (our event was a response to the jihad murder of the Charlie Hebdo Muhammad cartoonists in Paris) would only encourage more violent intimidation, and that given the fact that Muslims frequently found even basic expressions of Christian faith to be “provocative,” they were effectively cutting the ground out from under themselves and their children, making it impossible for them to practice Christianity in the future.

These incidents in Uganda are proof that this was correct. In declaring jihad and stating that the Muslims were now on a quest for revenge, Abubakar Yusuf and the Muslims who agree with him are in effect saying that the public expression of the Christian Faith mocks Islam and despises Islamic teachings. Abubakar Yusuf’s announcement that the Muslims had “declared jihad” against the Christians and would “seek revenge” against them was tantamount to a declaration that the Christians must submit to the hegemony of the Muslims, not daring to practice their faith openly, but only in private, behind closed door, and at the sufferance of their Muslim overlords.

This is exactly the status that Islamic law prescribes for Christians in lands governed by Islamic law, and so it is clear that Abubakar Yusuf is no lone fanatic, but is enunciating what many Muslims in Uganda believe to be only right and proper.

The lesson is clear, and not just for Uganda. If the advice of the cosseted, suburban Western Christians who were excoriating me for the Garland event is to be heeded, Christians should make no public expression of their faith at all, and convert to Islam, so as to avoid mocking, provoking, and offending Muslims, and poking them in the eye.

And what it comes to it, that is most likely the exact thing that those Christians will do. READ MORE

This Is What Muslims Do To Christians In Uganda

Read More:Somalia Bans Christmas And Vows To Punish Anyone Who Celebrates Christianity