A recent jump in the number of sightings of alleged TR-3B aircrafts has sparked a panic among online conspiracy communities. Experts fear that there “is something going on” amid concern over top-secret US military experiments or the involvement of extraterrestrials. Michael, of the YouTube channel MrMBB333, posted the latest sighting of the alleged TR-3B in Toledo, Ohio.

The footage shows that the object has a large light in the centre of the triangle, a smaller light in the front and three more across the back. 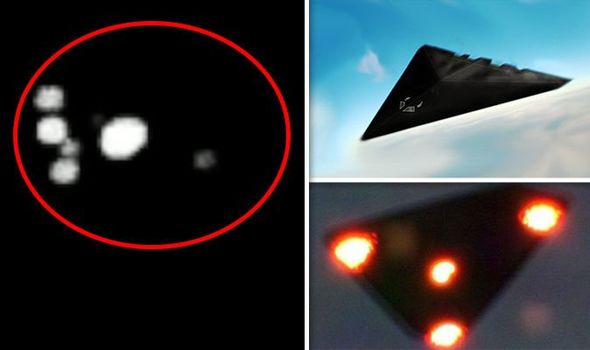 A recent jump in the number of sightings of alleged TR-3B aircrafts has sparked a panic (Image: IG)

We are seeing a lot of these lately

Viewers remarked the “triangle-shaped crafts are everywhere these days”.

One user said: “I have a feeling were going to start seeing a lot more of this type of situation soon.”

The sighting took place just a few miles from the Wright-Patterson air Force Base – raising concern of US military involvement.

According to government officials, the TR-3B “does not exist”.

The theory around these crafts claim they are created at top-secret military bases like Area 51 in Nevada, by reverse engineering alien technology.

Others claim they are actual UFOs flown by aliens visiting Earth.

There have been other sightings of triangular UFOs recently in Russia and North Carolina.

Read More:Strange Green Lights Flash Across The Sky In Australia

Read More:Mysterious Lights In The Sky AFTER Delta IV Rocket Cancelled- So What Was It?