There are many reported human skeletal finds which are in discordance with current evolutionary beliefs dating back to anomalously ancient geological periods in the distant past, way before it is accepted that human beings ever existed.

One intriguing report surfaced in an American journal called The Geologist dated December 1862:

“In Macoupin County, Illinois, the bones of a man were recently found on a coal-bed capped with two feet of slate rock, ninety feet below the surface of the earth. . . The bones, when found, were covered with a crust or coating of hard glossy matter, as black as coal itself, but when scraped away left the bones white and natural.”

The coal in which the remains were found have been dated at between 320 and 286 million years old, which, despite a lack of supporting evidence and little information on the discovery, is certainly worthy of inclusion here. 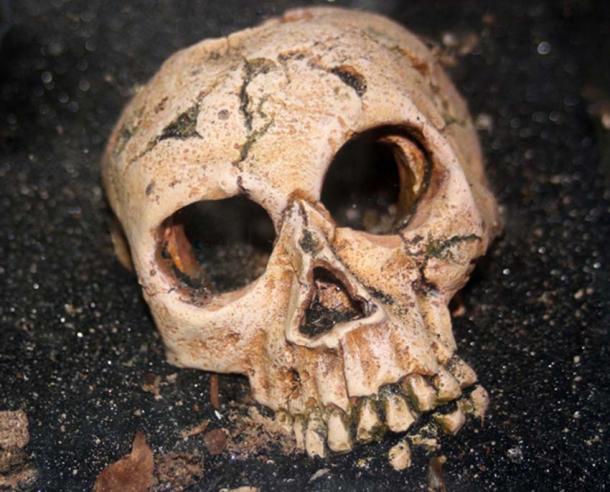 Representational image. “ the bones of a man were recently found on a coal-bed capped with two feet of slate rock, ninety feet below the surface of the earth…” ( CC0)

A better documented account of an anomalous find is of a human jaw discovered at Foxhall, England, in 1855 which was dug out of a quarry at a level of sixteen feet (4.88 meters) under ground level, dating the specimen to at least 2.5 million years old. American physician Robert H. Collyer described the Foxhall jaw as ‘the oldest relic of human existence’. The problem with this particular fossil was its modern appearance. A more apelike mandible would have been more acceptable despite its great antiquity, but many dissenters disbelieved the authenticity of the bone ‘probably because the shape of the jaw was not primitive’, according to paleontologist Henry Fairfield Osborn. 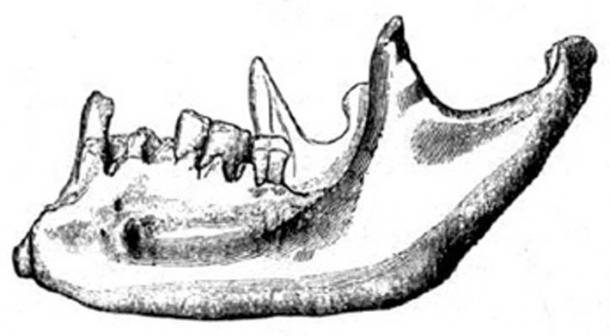 The Foxhall jaw is anatomically modern yet was discovered in strata dating back more than 2.5 million years. (Author provided)

A fully modern human skull was found in Buenos Aires, Argentina, in an Early Pliocene formation, revealing the presence of modern humans in South America between 1 and 1.5 million years ago. But once more, the modern appearance of the skull doesn’t fit with conventional thinking on human origins so was discounted on these grounds alone. Here we see a clear example of dating by morphology, and a distinct disregard of all other data, no matter how credible. The thinking is simple; if it looks modern – it must be modern. No modern humans could possibly have existed that far back in time so it must be ruled out. 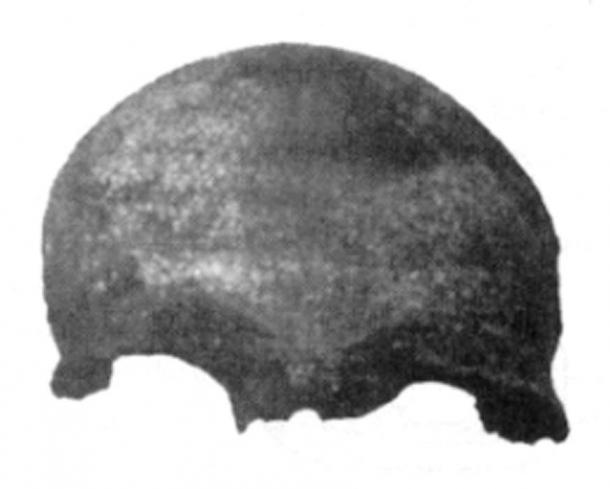 This approach employs illogical thinking if one considers that the skull was found in a Pre-Ensenadean stratum, which, according to present geological calculations, dates back up to 1.5 million years. The scientific data, as with a plethora of cases worldwide, does not match the final analogy, and instead of pursuing the matter further until a satisfactory scientific conclusion is arrived upon, the discovery has slipped unsurprisingly into anonymity.

In a quarry on the Avenue de Clichy, Paris, parts of a human skull were discovered along with a femur, tibia, and some foot bones by Eugene Bertrand in 1868. The layer in which the Clichy skeleton was dug out from would make the fossils approximately 330,000 years old.

It wasn’t until Neanderthals became accepted as the Pleistocene ancestors of modern humans that French anthropologists were forced to drop the Clichy skeleton from the human evolutionary line, as a modern type of human could not predate their allegedly older Neanderthal relatives. Neanderthals are conventionally understood to have existed from 30,000 to 150,000 years ago, and the Clichy skeleton which dated at over 300,000 years ago was simply not an acceptable find despite the evidence to support its authenticity. 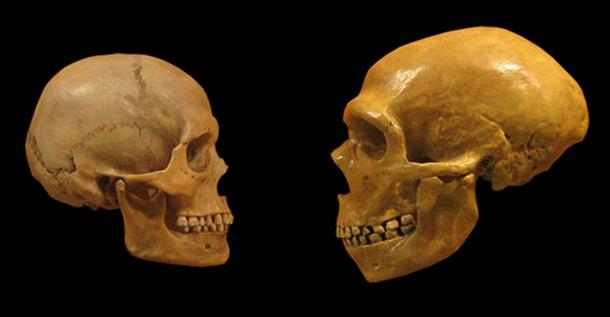 Comparison of Modern Human and Neanderthal skulls from the Cleveland Museum of Natural History. (DrMikeBaxter/ CC BY SA 2.0 )

In 1911, another anatomically modern human skeleton was discovered beneath a layer of glacial boulder clay near the town of Ipswich, in England, by J. Reid Moir. Found at a depth of about 4.5 feet (1.37 meters) between a layer of clay and glacial sands, the skeleton could be as much as 400,000 years old.

Naturally, the modern appearance of the skeleton was the cause of strong opposition, but if the find had of been Neanderthal-like, there would have been no questions raised over its position in the glacial sediments. As Scottish anatomist and anthropologist, Sir Arthur Keith explained, “Under the presumption that the modern type of man is also modern in origin, a degree of high antiquity is denied to such specimens.” 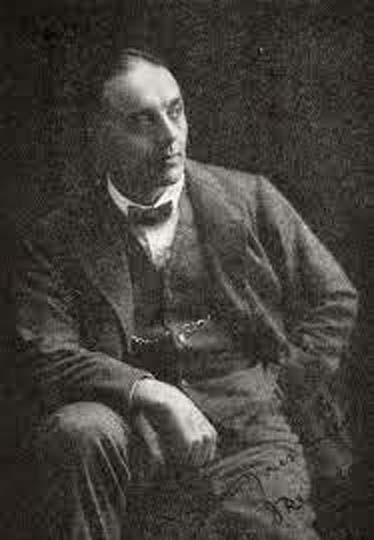 The deposits in which the Ipswich skeleton was excavated from were recorded by the British Geological Survey as an intact layer of glacial boulder clay which had been laid down between the onset of the Anglian glaciation and the Hoxnian glaciations, a period that stretched between 330,000 and 400,000 years ago. Some authorities have even put the beginning of the Mindel glaciation (which is equivalent to that of the Anglian) at around 600,000 years ago, which could potentially allow the Ipswich skeleton to also date back that far.

Situated in the southern slopes of the Alps, at Castenedolo, six miles (9.66 km) southeast of Brescia, lays a low hill called the Colle de Vento, where millions of years ago during the Pliocene period , layers of mollusks and coral were deposited by a warm sea washing in.

In 1860, Professor Giuseppe Ragazzoni traveled to Castenedolo to gather fossil shells in the Pliocene strata exposed in a pit at the base of the Colle de Vento. Reporting on his finds there Ragazzoni wrote:

“Searching along the bank of coral for shells, there came into my hand the top portion of a cranium, completely filled with pieces of coral cemented with blue-green clay characteristics of that formation. Astonished, I continued the search, and in addition to the top portion of the cranium I found other bones of the thorax and limbs, which quite apparently belonged to an individual of the human species.” 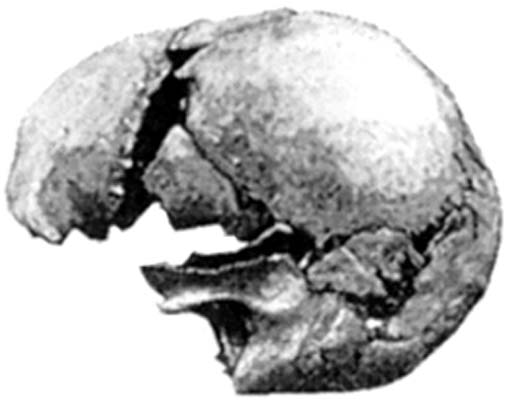 Once more, negative reactions ensued by both geologists and scientists who were unwilling to accept the Pliocene age offered by Ragazzoni for the skeletal remains. It was explained away by an insistence that the bones, due to their clearly modern characteristics, must have come from a recent burial and somehow or other found themselves among the Pliocene strata. If in doubt, simply explain it away with logical thinking, even if you ignore the facts within plain sight and filter out the parts which do not fit.

Ragazzoni was understandably not pleased with the reception he received and the disregard given to his legitimate discovery of an anomalously ancient human skeleton, so he kept his eye on the site where he had found the relics once the land was sold to Carlo Germani in 1875, (on the advice of Ragazzoni, who had advised that the phosphate-rich clay could be sold to farmers as fertilizer).

Many more discoveries followed from 1879, as Germani kept his word and informed the professor immediately upon finding more bones in the pit. Jaw fragments, teeth, backbone, ribs, arms, legs and feet were all dug out of the Pliocene formation which modern geologists have placed at around 3-4 million years old. 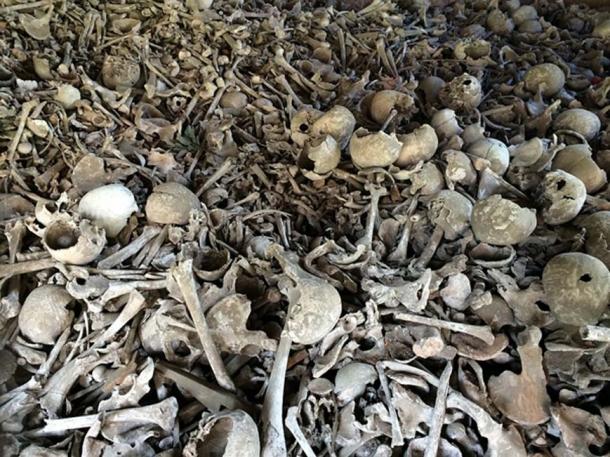 Representational image of various human bones in a pit. ( CC0)

‘All of them were completely covered with and penetrated by the clay and small fragments of coral and shells, which removed any suspicion that the bones were those of persons buried in graves, and on the contrary confirmed the fact of their transport by the waves of the sea’, said Ragazzoni.

And on February 16, 1880, Germani informed Ragazzoni that a complete skeleton had been discovered, enveloped in a mass of blue-green clay, remains which turned out to be that of an anatomically modern human female.

“The complete skeleton was found in the middle of the layer of blue clay. . . The stratum of the blue clay, which is over 1 metre thick, has preserved its uniform stratification, and does not show any sign of disturbance” wrote Ragazzoni, adding, “The skeleton was very likely deposited in a kind of marine mud and not buried at a later time.” 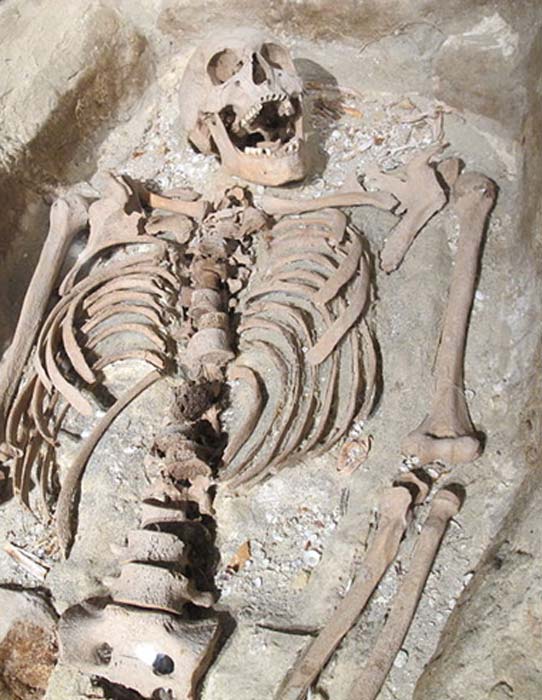 Example of a grave and skeleton at a maritime museum. (Marlene Oostryck/ CC BY 3.0 )

After personally examining the Castenedolo skeletons at the Technical Institute of Brescia in 1883, Professor Giuseppe Sergi, an anatomist from the University of Rome, was convinced that they represented the remains of humans who had lived during the Pliocene period of the Tertiary.

Writing of his disdain towards the naysayers within the scientific community Sergi commented, “The tendency to reject, by reason of theoretical preconceptions, any discoveries that can demonstrate a human presence in the Tertiary is, I believe, a kind of scientific prejudice. Natural science should be stripped of this prejudice.”

Anomalous Skeletons Have Their Place Too!

Unfortunately, this prejudice which continues to this day, shows no signs of abating, as Professor Sergi recognized back in the 19th century, ‘By means of a despotic scientific prejudice, call it what you will, every discovery of human remains in the Pliocene has been discredited.’

So why does its modern appearance override the other factors? It doesn’t seem to be a very scientific approach to disregard an archaeological find simply because it does not conform to contemporary evolutionary theses. The examples cited in this article are only a small selection which has been rescued from obscurity by vigilant researchers, but how many more cases have suffered similar dismissal due to their anomalistic circumstances ? 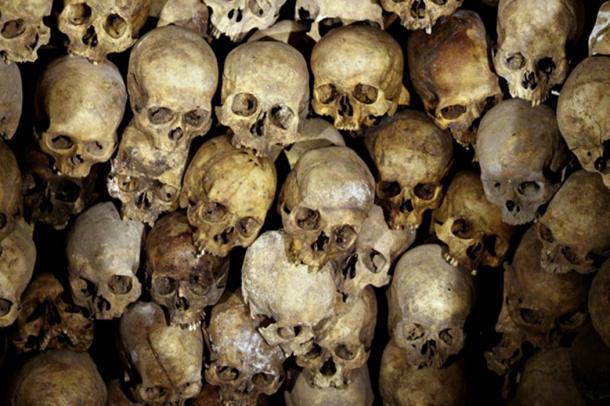 Representational image of human skulls. How many more cases have suffered similar dismissal due to their anomalistic circumstances? ( CC0)

If science continues to sweep unusual discoveries under the carpet, how are we supposed to progress as a species if we are intent on denying data which contradicts our rigid paradigms? It would appear that the knowledge filter has been in place for some time, much to the detriment of humankind and our quest to illuminate our foggy, mysterious ancient past.

Of course we cannot be sure of the validity of the anomalous finds mentioned above, but by ignoring the sheer volume of cases which question current scientific paradigms regarding the evolution of man, we are being denied the whole story – which can only be detrimental to the ongoing study of human evolution .

Top Image: Representational image of human skeletons. The discovery of anomalous skeletons suggests humanity may be older than we think. Source: CC0

This article was taken from the chapter ‘Bones and Stones’ in The Myth of Man by J.P. Robinson.