Skip to content
Now, Lebanese and Taiwanese citizens are taking to the streets in their thousands calling for “revolution” and an end to globalism. In Lebanon, huge crowds of protesters descended on the capital on Sunday, marching through the streets shouting “Revolution, revolution!” and “Down [with] the Government!,” condemning the country’s political and economic situation. Most were seen wearing yellow vests – the garment which has emerged as a symbol of resistance following civil unrest in France.

Following weeks of Yellow Vest protests in France, against President Macron’s globalist policies, the movement is continuing to spread worldwide as thousands of yellow-vested citizens in Taiwan and Lebanon join the fight by rising up against their own governments’ push for globalism. Inspired by the original French uprising, protesters across Europe have been taking to the streets wearing yellow vests to make their voices heard. The movement has continued to spread across the Atlantic, with demonstrations springing up in California and Canada. With many of the original “mouvement des gilets jaunes” taking time out for the Christmas period, it’s easy to assume that the protests may have died down, or the protesters have given up, but a series of major rallies are planned for January in what has been dubbed the Yellow Winter. 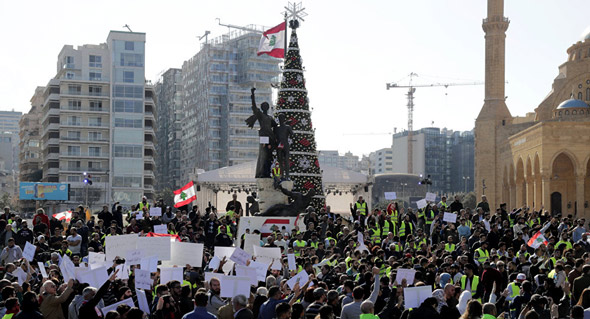 “We demand respect for our rights. Where is the medicine? People are dying at the doors of hospitals. The government has been inactive for years; what do we need such a government for? Let them resign!” an enraged protester told Sputnik.
An activist from the Sabaa Party added that protesters demand the formation of a new government as soon as possible, since, without it, the country will sink into the abyss. She also said that her party will push parliament to punish corrupt officials and recover embezzled public funds. Rally-goers waved makeshift banners, with various messages, including, “down [with] the government,” “confiscate the stolen money,” “fight against corruption,” and “form a government.” Women also wore white masks with “democracy, freedom, transparency” written on them. “Many people suffer from hunger; there is dissatisfaction in society. We are sharing the calls to go out to protest through social media,” one protester explains. “My friends and I participated in a rally last week, today we have also come and will come any other day to make the people’s voice heard.”
Another man accused the government on reneging on its promise to reform the country. He explained that there should only be one government, but in fact, there are 18 separate ministries in the country that are united by a common goal — to prioritize their own interests and work against the people as they push globalist policies. 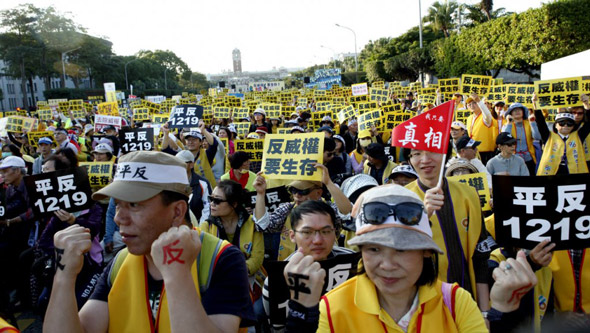 In Taiwan, similar scenes were witnessed as thousands of enraged citizens donned yellow vests on a rainy Thursday morning to protest outside the Ministry of Finance, the architect of Taiwan’s tax system, after feeling inspired by the yellow vest movement in France. According to the LA Times, their campaign is the first major one in Asia inspired by the French movement, which was provoked by an increase in fuel taxes. About 20,000 Taiwanese participated in demonstrations last week outside the presidential office, and about half that number protested in the capital of Taipei on Saturday, according to organizers and local media reports.
“This problem is about to explode, so we’re wearing the yellow vests to go out and see if the government is willing to change,” said Wang Chih-lan, a media liaison with a Taipei-based advocacy group, Tax & Legal Reform League, which organized the protest. With their yellow vests worn under clear plastic raincoats, the Taiwanese protesters yelled slogans demanding that President Tsai Ing-wen’s government overhaul the income tax system. Some waved banners calling current policies illegal and blared airhorns outside the ministry offices, which were guarded by police. Many at Taiwanese demonstrations complaining against the country’s rising taxes. Tax rates deter young people from starting companies, discourage foreign investors from doing business in Taiwan and hurt entry-level workers who already struggle with low wages, they said. Wages are a particularly sore point for Taiwan. The minimum wage will reach $750 per month in January, and wages now average $1,364 per month, often too little for workers in Taipei to afford housing unless they live with their parents or friends. “They play dead and don’t come out and say what the problems are,” said protester Lily Chen, 48, pointing to the finance ministry high-rise building. “There’s no good way to appeal a case. So we’re pleading with the government.” In response, ministry section chief Tsai Meng-chu claims that taxes cannot make taxpayers “poor,” because Taiwanese are allowed to pay in installments.