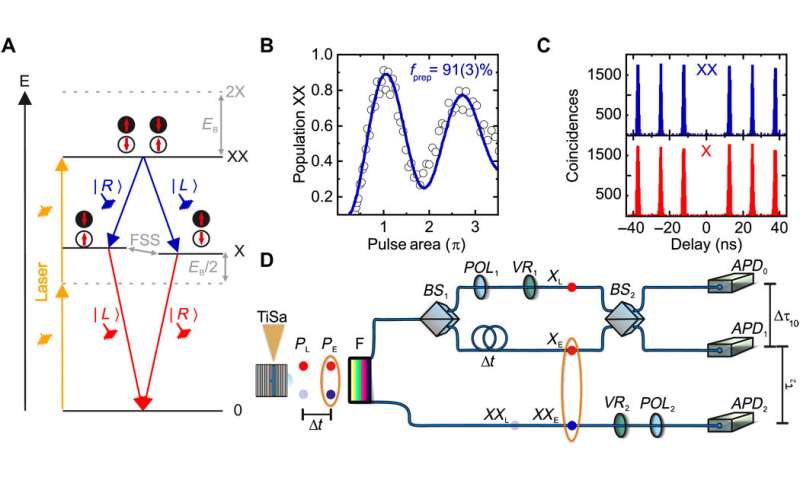 A team of researchers from Austria, Italy and Sweden has successfully demonstrated teleportation using on-demand photons from quantum dots. In their paper published in the journal Science Advances, the group explains how they accomplished this feat and how it applies to future quantum communications networks.

Scientists and many others are very interested in developing truly quantum communications networks—it is believed that such networks will be safe from hacking or eavesdropping due to their very nature. But, as the researchers with this new effort point out, there are still some problems standing in the way. One of these is the difficulty in amplifying quantum signals. One way to get around this problem, they note, is to generate photons on-demand as part of a quantum repeater—this helps to effectively handle the high clock rates. In this new effort, they have done just that, using semiconductor quantum dots.

Prior work surrounding the possibility of using semiconductor quantum dots has shown that it is a feasible way to demonstrate teleportation, but only under certain conditions, none of which allowed for on-demand applications. Because of that, they have not been considered a push-button technology. In this new effort, the researchers overcame this problem by creating quantum dots that were highly symmetrical using an etching method to create the hole pairs in which the quantum dots develop. The process they used was called a XX (biexciton)–X (exciton) cascade. They then employed a dual-pulsed excitation scheme to populate the desired XX state (after two pairs shed photons, they retained their entanglement). Doing so allowed for the production of on-demand single photons suitable for use in teleportation. The dual pulsed excitation scheme was critical to the process, the team notes, because it minimized re-excitation.

The researchers tested their process first on subjective inputs and then on different quantum dots, proving that it could work across a broad range of applications. They followed that up by creating a framework that other researchers could use as a guide in replicating their efforts. But they also acknowledged that there is still more work to be done (mostly in raising the clock rates) before the process could be used in real-world applications. They expect it will be just a few more years.

Read More:Quantum Teleportation Now A Possibility As Scientists Beam Proton From Earth To Satellite In Space
Read More:Secure Quantum Communication For All Could Be Just Around The Corner
Watch More:D Wave Quantum Computer: Keys To The Bottomless Pit And Collaborations With Other Dimensions