On June 30, 1895 at the age of fifteen, Alice Bateman had a memorable experience. “I was sitting in the drawing room reading. The door opened and in walked a tall man dressed in European clothes…but with a tall turban on his head…. He told me there was some work that it was planned that I could do in the world but that it would entail my changing my disposition very considerably;” [1] In 1915, Alice met two English women living in Pacific Grove, California, who introduced her to Theosophy and Helena Blavatsky. Through her studies of Blavatsky’s Secret Doctrines, she realized the man she met at age 15 was Master KH (Koot Hoomi). “I discovered that he was not the Master Jesus, as I had naturally suspected….I have worked for Him, ever since I was fifteen years old and I am now one of the superior disciples of his group – or as it is called esoterically – in his ashram.” [2] 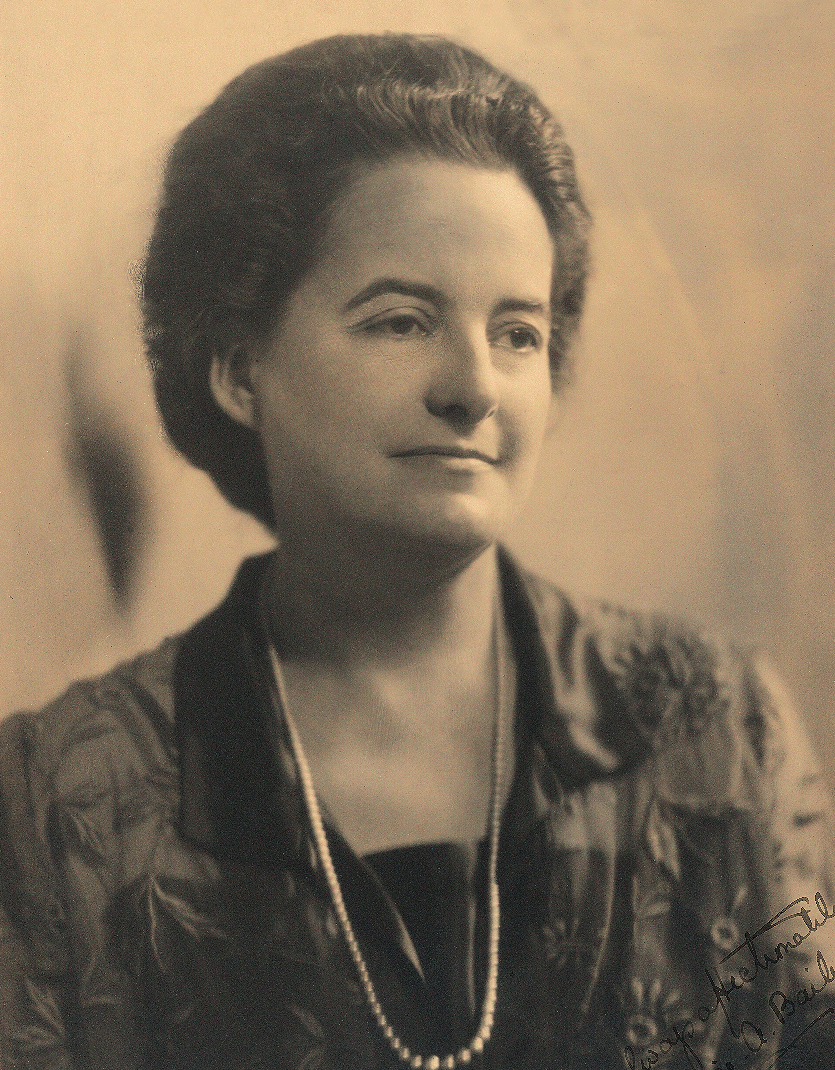 In 1917, Alice moved to Hollywood to be near the headquarters of the Theosophical Society at Krotona. Her first job at the center was as a vegetarian cook, scrubbing the bottom of garbage pails. A divorce from Walter Evans was soon followed by marriage to Foster Bailey, a lawyer who devoted his life to ancient wisdom. [3] In the fall of 1919 Alice had an encounter with still another Master, who guided her for thirty years. By 1922, Bailey started the Lucis Trust Publishing Company, in 1923, the Arcane School, and by 1932, the World Goodwill. Between the years 1919 and 1949, she produced twenty-four books, including an autobiography; nineteen of these books were supposed to have been written by her Tibetan Master, DK (Djwhal Khul).

Regarding Master DK’s communications, Alice Bailey comments, “I remain in full control of my senses of perception…. I simply listen and take down the words that I hear and register the thoughts which are dropped one by one into my brain…. I have never changed anything that the Tibetan has ever given to me…. I do not always understand what is given. I do not always agree. But I record it all honestly and then discover it does make sense and evokes intuitive response.” [4]

Alice Bailey spent the majority of her years working out what she referred to as “The Plan.” As a result of her works, many other groups have been birthed or influenced. Some of these groups are: the Church Universal and Triumphant, the Tara Center, and the Robert Muller School, to name a few. They continue to promulgate Alice Bailey’s message of “world peace,” the divinity of all mankind, the unity of all religions, and service to mankind. This once devoted Sunday School teacher and missionary worker was finally renowned as a prolific author of occult writings, and the mother, some would say, of the modern form of the New Age Movement.

Lucis Trust Publishing Company
The word “Lucis” comes directly from the name Lucifer, which means “the one who brings light,” or, “light bearer.” Webster’s New Twenty-first Century Dictionary says: “Lucifer: light bringing, Satan, as especially the leader of the revolt of the angels before his fall.” Not surprisingly, Lucis Trust’s first name was Lucifer Trust, but was later changed due to controversy. [5] The purpose of Lucis Trust is the establishing of a “New World Order.” Lucis Trust’s teachings have been translated into fifty languages. They have also published a “common prayer,” formally called “The Great Invocation.” Under the facade of love and goodwill, this dangerous New Age Organization lures many to the philosophy and doctrines of the occult. Today it has over 6,000 active members, with headquarters located in the United States, Germany, Great Britain, Holland and Switzerland.

The Arcane School
Headquartered in New York, with centers also in Europe, the school’s graduates have frequently become leaders in the New Age Movement. They form a part of what they call The New Group of World Servers, men and women working in all walks of life, preparing the world for the New Age. Bailey described the Arcane School as “non-sectarian, non-political, but deeply international in its thinking. Service is its keynote. Its members can work in any sect and any political party provided that they remember that all paths lead to God and that the welfare of the one humanity governs all their thinking. Above everything else, …a student is taught that the souls of men are one….It is a school wherein true occult obedience is developed….They are taught… prompt obedience to the dictates of their own soul. As the voice of that soul gets increasingly familiar it will eventually make them members of the Kingdom of God and bring them face to face with Christ.” [6] 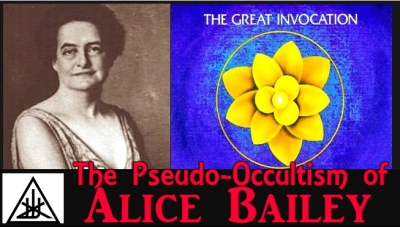 World Goodwill
World Goodwill is an organization that claims to be preparing the way for a one-world religion and a one-world government. World Goodwill works closely with the United Nations. It maintains headquarters in the cities of New York, London and Geneva. The group publishes literature as well as conducts symposiums related to its goals, which are consistent with those of Lucis Trust. Much of its public literature shows no signs of its occultic background nature, making it the perfect vehicle for attracting into its New Age influence people who would reject overtly religious or occult philosophy.

Doctrine
God: Bailey’s views on God seem confused. At times her writing appears to assume there is a personal God. Yet overall, the tenor of her writing is along the lines of all pantheists, that all is God (God Immanent), and that God is an impersonal energy force (God Transcendant). [7] Her writings betray deep misunderstanding of the God of the Bible, but adamant feelings against what she thinks Him to be.

“Christianity has emphasized immortality but has made eternal happiness dependent upon acceptance of a theological dogma: Be a true professing Christian and live in a somewhat fatuous heaven or refuse to be an accepting Christian…and go to an impossible hell; a hell growing out of the theology of the Old Testament and its presentation of a God, full of hate and jealousy.” [8]
Jesus: For Bailey, Jesus was only one of many Ascended Masters. He was not the one and only Son of God. “For decades, the reappearance of the Christ, the Avatar, has been anticipated by the faithful in both hemispheres, not only the Christian faithful, but by those who look for Maitreya and for the Boddhisattva as well as those who expect the Imam Mahdi.” [9]

Reincarnation: According to this esoteric doctrine, one returns to this world, or plane, living multiple lives, until one gets it right. This is a result of Karma, the law of cause and effect. Finally one is reabsorbed into the universal whole, God. “Death is ‘a touch of the soul which is too strong for the fragile body’: it is a call from divinity that brooks no denial; it is the voice of the inner spiritual identity saying: Return to your centre or source, for awhile and reflect upon the experiences undergone and the lessons learnt until the time comes when you return to earth for another cycle of learning, of progress and of enrichment.” [10]
Salvation: Alice Bailey believed that salvation is the moment you realize you have a divine nature. “We have regarded half the world as lost and only the Christian believer as saved, yet all the time Christ has told us that love is the way into the kingdom, and that the fact of the presence of divinity in each of us makes us eligible for that kingdom.” [11]

Man: Alice Bailey did not believe that man is a created being, separate from, and owing his existence to, the transcendant Creator; rather mankind itself and all individuals are expressions or manifestations of the divine, and thus themselves divine. “Before we can enter upon the study of Ageless Wisdom and take up the consideration of the science of some unfoldment it is essential that we grasp the fact of our divinity.” [12]

The Church: Some of Alice Bailey’s statements may seem favorable toward Christianity: “Christianity cannot be attacked; it is an expression – in essence, if not yet entirely factual – of the love of God, immanent in his created universe.” [13] However, in such statements it is always Christianity as she defined it, of which she speaks. On the other hand some of her most contemptuous words were for the Christian Church and Christian doctrines: “The Church today is the tomb of Christ and the stone of theology has been rolled to the door of the sepulchre.” [14]

Man: The Bible teaches man was made in the image of God (Gen. 1:26), not that he is a manifestation or extension of God. It also says man is so far separate from God that God could regret having made man (Gen.6:5-6). It teaches man is sinful from birth, i.e. by nature (Ps. 51:5). If men are God then God is sinful. If God is perfect and without sin then men are not God or a part of God.

Reincarnation: Jesus did speak of being born again (Jn. 3:3), something Alice Bailey and many people in the New Age movement seize upon to justify their doctrine of reincarnation. However, Jesus made it plain He was not speaking of another birth into a physical body, but of a spiritual birth which takes place in this life and affects our eternity (Jn. 3:5,6). The Bible teaches we have only one lifetime in which to make those decisions which will affect our eternal destiny (Heb. 9:27)

Salvation: The Bible teaches that man is sinful, and God hates sin. Man stands in need of someone to save him from God’s just wrath against his sin. God loves man, but cannot save him in any manner that denies His own essential justice and righteousness. In infinite wisdom, God Himself provided the sacrifice necessary to appease His wrath against sin (Rom. 3:23-25) and the righteousness necessary to fulfill the perfect standard of His law (Rom. 4:4-6, 21-23; 5:17, 19; Phil. 3:8, 9). All this is found in Jesus Christ and no other (Acts 4:12; 1 Tim. 1:15; 2:5, 6).

The Church: Christians agree with Bailey that the true church is not a visible institution, and that all such organizations, being the work of man, are to some extent corrupted. However, Jesus said that His true church would never be overcome (Matt. 16:18). This could not be so apart from, among other things, true doctrine. The truth has survived through the ages, including the millenia during which no Christian knew or professed any such gospel as Alice Bailey’s. Far from seeing the church as Christ’s tomb, the Bible says it is His body (Rom. 12:4, 5; 1 Cor. 12:12-14, 27). The doctrine established for the church, far from being a stone over Christ’s sepulchre, was written down and preserved in Scripture for the benefit of the church (Rom. 15:4; Eph. 4:14-16; 2 Tim. 3:16, 17). The Bible teaches that God would receive glory in the church throughout all generations (Eph. 3:21) and that Jesus would be with it to the end of the world (Matt. 28:20.