he remarkable find was made this summer in the famous Siberian cave where, over many millennia, early Homo sapiens lived alongside extinct Neanderthals and another long-gone branch of ancient man known as Denisovans.

The suspicion is that the tiara – or diadem – was made by Denisovans who are already known to have had the technology 50,000 or so years ago to make elegant needles out of ivory and a sophisticated and beautiful stone bracelet .

This tiara that has now joined this collection may just be the oldest of its type in the world. 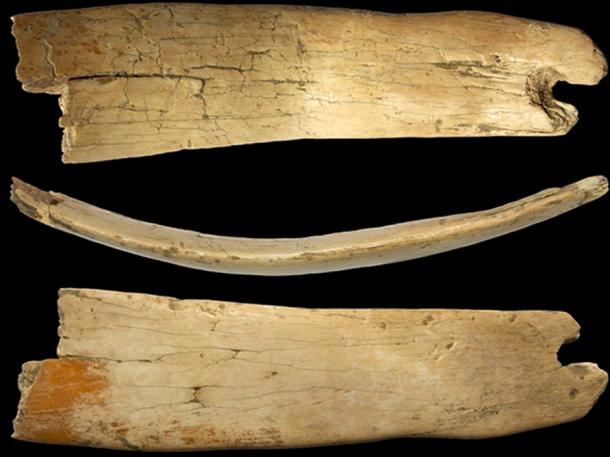 The Purpose of the Mammoth Bone ‘Tiara’

It appears to have had a practical use; to keep hair out of the eyes and its size indicates it was for male, not female, use.

Another theory for the function of such items, although related to tiaras made 20,000 years later by people living around river Yana in Yakutia, is that they could have denoted the family or tribe of ancient man, acting like a passport or identity card.

Marks on it show it had ‘wear and tear’ before being discarded as broken in a cave that is seen by archaeologists as one of the most significant treasure troves of early man anywhere in the world. 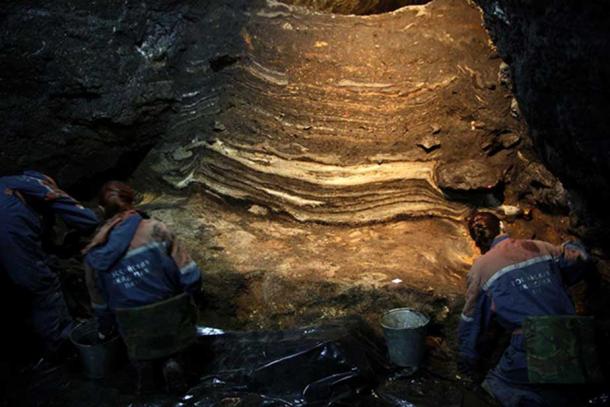 Southern gallery of the Denisova cave where the previous tiara was found. (Novosibirsk Institute of Archeology and Ethnography)

There were, though, no religious symbols or ornaments on the woolly mammoth tiara, made at a time when the giant species still roamed Siberia with ancient man as a predator.

Working of the Headpiece

The Paleolithic tiara can be dated to between 45,000 to 50,000 years, and was worn by a man with a large head, according to researcher Alexander Fedorchenko, from Novosibirsk Institute of Archeology and Ethnography.

There is a hole in the rounded end of the tiara, where a cord was threaded to tie it at the back of the head.

Earlier, a small piece of a frontal part of an ornamented mammoth ivory tiara was found in the Denisova Cave in the Altai Mountains in southern Siberia.

The latest discovery adds to the theory of Siberian researchers that the ancient inhabitants of the cave wore tiaras for many millennia and most likely produced them. 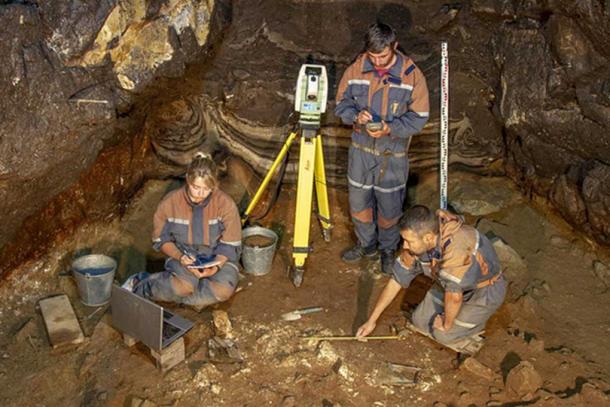 The team of Siberian researchers (Novosibirsk Institute of Archeology and Ethnography)

The fact of manufacturing is evidenced by numerous fragments of mammoth tusk found inside the cave.

‘Finding one of the most ancient tiaras is very rare not just for the Denisova cave, but for the world. Ancient people used mammoth ivory to make beads, bracelets and pendants, as well as needles and arrow heads’, said Fedorchenko.

‘The fragment we discovered is quite big, and judging by how thick the (strip) is, and by its large diameter, the headband was made for a big-headed man.’

He explained that some 50,000 years after it was made, it fitted his own temple and the back of his head.

Its diameter could have changed with years due to gradual straightening of the curved part, he said.

‘Mammoth ivory plates were first thoroughly soaked in water to become more ductile and not crack during processing, and then they were bent under a right angle,’ he said.

‘Any bent object tends to return to their original shape over time. This is the so-called memory of the shape effect. We must remember this while trying to judge the size of the head of the tiara’s owner by its diameter.’ 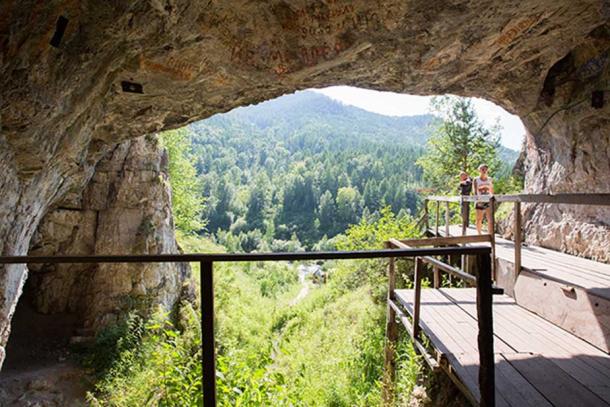 The Denisova Cave. (The Siberian Times)

The world famous Denisova cave first caught the attention of Soviet scientists in 1970s, when they found palaeo-archeological remains which led to further research.

Now the site on the border of Altai region and the Altai Republic, in the south of western Siberia, has a permanent research camp, seen as the  pride of Novosibirsk Institute of Archeology and Ethnography.

‘We have quite a collection of mammoth ivory found inside the Denisova cave, thirty pieces in total with various types; beads, three rings, parts of bracelets and arrowheads’, said Fedorchenko.

‘Finding a piece as big as tiara is an incredibly rare discovery for Siberia. There were mammoth ivory tiaras, including some decorated, found on Paleolithic sites in the extreme North and in the east of Siberia.

Such examples are from the Yana site in Yakutia.

A Tiara Rich in Information

The tiara is a gift for trace evidence experts as it shows all possible ways of processing mammoth ivory used by ancient men from the Denisova Cave, like whittling, soaking in water, bending, grinding, polishing and drilling.

‘These are all possible technologies from A to Z typically used in the Paleolithic time, but which are usually associated with activities of Homo sapiens.

‘Here we likely deal with another, more ancient culture, because there was not a single piece of bone belonging to a Homo sapiens found in the cave’, said Fedorchenko.

What the Siberian scientist did find were bones of a new type of human that was named Homo altaiensis, or Denisovan.

The researchers are still working with the precious piece of mammoth ivory, defining its dating and reconstructing the tiara. Once assembled, there will be pictures and drawings of what the tiara looked like many millennia ago.

There is a good chance other pieces of the tiara will be found.

‘The mammoth ivory is so durable it keeps for centuries. As long as other pieces of tiara were not damaged or eaten by cave hyenas, we will find them,’ said Fedorchenko.

He explained the issues researchers face when dating pieces made of mammoth ivory.

The radiocarbon method gives the date of the mammoth’s death, but the age of the tusk and the time it was processed might differ for dozen thousand years.

To get a more accurate dating, scientists have to date the archeological layer where the tiara was found.

This can be done by radiocarbon dating of animal remains found in this layer, or by using a more up-to-date Optical Dating method.

This technology allows experts to establish the time when the culture-containing layer was upper and revived daylight (photons).

Other discoveries in the cave include a bracelet made from made from stunning green-hued chlorite, bead jewelry from ostrich eggs, and a needle – still useable today. These testify to their talents, say archeologists. 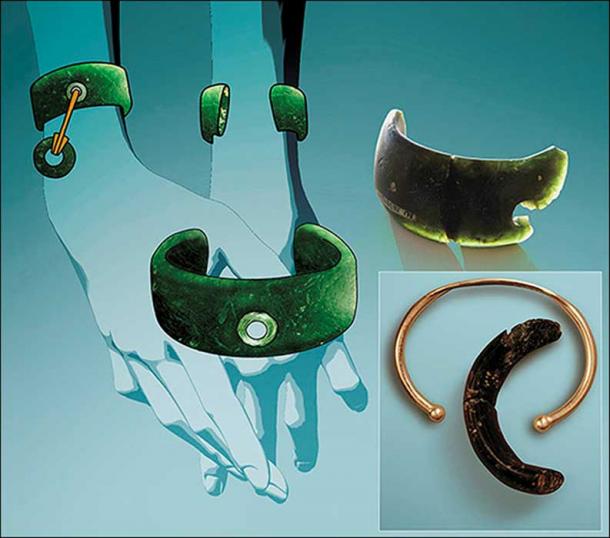 Earlier this year details were revealed in Nature journal of the discovery of evidence of an inter-species child called Denny who lived some 90,000 years ago.

She was the product of a sexual liaison between a Neanderthal mother and a Denisovan father, according to DNA findings.

Remarkably, Denny’s relatives – with five per cent Denisovan DNA – are the native peoples of Australia and Papua New Guinea, presumably after her descendants gradually migrated eastwards from Siberia – interbreeding as they journeyed.

The Denisovans were first identified a decade ago when a tiny finger bone fragment of so-called ‘X woman’ was discovered,  a young female who lived around 41,000 years ago. 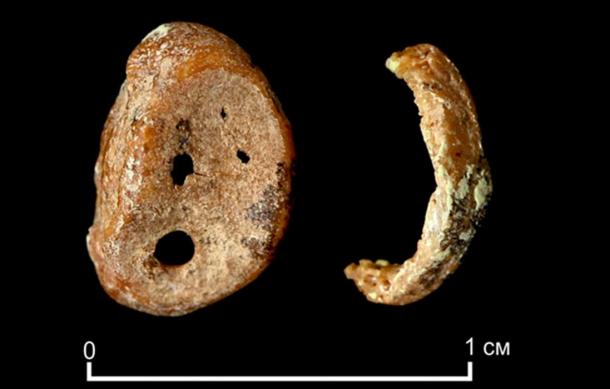 She was found to be neither Homo sapiens nor Neanderthal. Denisovan blood lives on, but nowhere near Siberia.

Top Image: The Paleolithic tiara made of woolly mammoth ivory can be dated approximately to between 45,000 to 50,000 years old. Source: The Siberian Times

The article first published as, ‘ 50,000 year old tiara made of woolly mammoth ivory found in world famous Denisova Cave ’ originally appeared on The Siberian Times and has been republished with permission.