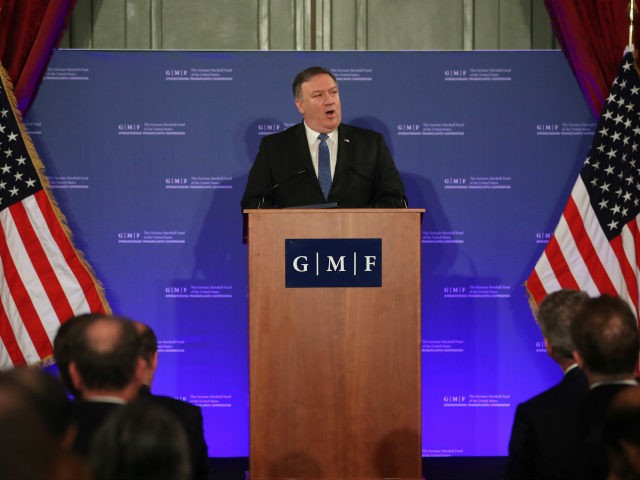 Secretary of State Mike Pompeo delivered an address in which he pushed for a “new liberal order” on the world stage to confront China, Russia, and Iran.

“In the finest traditions of our great democracy, we are rallying the noble nations to build a new liberal order that prevents war and achieves greater prosperity,” Pompeo said in a speech this week, per a transcript released by the State Department.

“We are acting to preserve, protect, and advance an open, just, transparent and free world of sovereign states,” Pompeo added, also pushing for the idea that this “new liberal order” the Trump administration is pushing would stand against “bad actors”–notably, China, Russia, and Iran.

Pompeo used this phrase to describe an alliance of western democracies against such “bad actors” just a few days after the death of former President George H.W. Bush.

Bush, America’s 41st president who passed away Friday night at age 94, oversaw the beginnings of the last couple decades’ worth of globalization that accelerated and expanded under his Oval Office successors, former Presidents Bill Clinton, his son George W. Bush, and Barack Obama. These issues of globalism–and this worldview of an international order projecting power worldwide at the forefront of which is the United States–came under intense scrutiny in 2016 as the current and 45th president of the United States, Donald J. Trump, ran for office and won by attacking much of it.

But now Trump’s chief foreign policy adviser, his secretary of state, is espousing in speeches a view that is remarkably similar to what George H.W. Bush said when he first used the phrase “new world order” in a speech to a joint session of Congress in the early 1990s.

Here is an excerpt from that speech that Bush gave to a joint session of Congress on September 11, 1990:

As you know, I’ve just returned from a very productive meeting with Soviet President Gorbachev. And I am pleased that we are working together to build a new relationship. In Helsinki, our joint statement affirmed to the world our shared resolve to counter Iraq’s threat to peace. Let me quote: “We are united in the belief that Iraq’s aggression must not be tolerated. No peaceful international order is possible if larger states can devour their smaller neighbors.” Clearly, no longer can a dictator count on East-West confrontation to stymie concerted United Nations action against aggression. A new partnership of nations has begun.

We stand today at a unique and extraordinary moment. The crisis in the Persian Gulf, as grave as it is, also offers a rare opportunity to move toward an historic period of cooperation.

It was in the very next sentence that Bush used the phrase “new world order”–and in the next few sentences, he explained that what it meant was a group of nations working together toward a goal of worldwide peace and prosperity:

Out of these troubled times, our fifth objective—a new world order—can emerge: a new era—freer from the threat of terror, stronger in the pursuit of justice, and more secure in the quest for peace. An era in which the nations of the world, East and West, North and South, can prosper and live in harmony. A hundred generations have searched for this elusive path to peace, while a thousand wars raged across the span of human endeavor. Today that new world is struggling to be born, a world quite different from the one we’ve known. A world where the rule of law supplants the rule of the jungle. A world in which nations recognize the shared responsibility for freedom and justice. A world where the strong respect the rights of the weak.

During that speech, it was still the hope of many in American foreign policy establishment circles–from which Bush hailed as a former CIA director–that the Soviet Union, which was breaking up into Russia and other states again after the fall of the Berlin Wall and end of the Cold War, could still work with the United States on this global vision. That Bush speech came in the joint address to Congress he gave when Iraqi dictator Saddam Hussein invaded Kuwait and before the then-coming fall of the Soviet Union.

As for the other two forces against which Pompeo says the Trump administration is aiming to organize a “new liberal order,” China had yet to, at that point, emerge as a major opposition force to the United States’s global vision as laid out by the president at the time, and Iran had already reared its ugly head as an enemy during former President Jimmy Carter’s administration in the late 1970s.

But generally speaking, the visions laid out by Bush in 1990 and by Pompeo in the wake of Bush’s death are similar, with slightly different players: they view the United States at the forefront of a global coalition of democracies and U.S.-approved governments taking on U.S. enemies. And the fact that the phraseology–“new world order” versus “new liberal order”–is essentially the same only cements the case.

How this affects the nation–and Trump himself, who faces voters again in two years after his GOP was shellacked by Democrats at the polls in the midterm elections in November–remains to be seen. But one of the biggest promises Trump made during his meteoric campaign into the White House was to end the war in Afghanistan–which has been going on for 17 years now with no end in sight–and he more generally pledged to be focused on an “America first” vision for U.S. foreign policy. Trump has yet to end the war in Afghanistan, a promise that proved elusive for his predecessor, Obama, as well. Trump has also remained active in other theaters militarily, including, most controversially, in Saudi Arabia’s war in Yemen

Read More:Not Good For The US: Russia And China Will Now Use Gold For International Currency