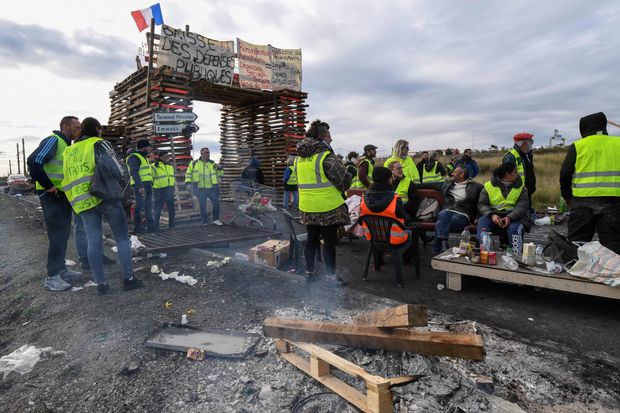 France’s violent Yellow Vest protests are now about many domestic concerns, but it’s no accident that the trigger was a fuel-tax hike. Nothing reveals the disconnect between ordinary voters and an aloof political class more than carbon taxation.

The fault line runs between anti-carbon policies and economic growth, and France is a test for the political future of emissions restrictions. France already is a relatively low-carbon economy, with per-capita emissions half Germany’s as of 2014. French governments have nonetheless pursued an “ecological transition” to further squeeze carbon emissions from every corner of the French economy. The results are visible in the Paris streets.

President Emmanuel Macron and his Socialist predecessor François Hollande targeted auto emissions because they account for about 40% of France’s carbon emissions from fuel combustion compared to 21% in Germany. But this is mainly because France relies heavily on nuclear power for electricity. Power generation and heating account for only 13% of French emissions, compared to 44% across the Rhine. French road-transport emissions were a mere 0.4% of global carbon emissions in 2016, when overall French emissions were less than 1%.

Yet Paris insists on cutting more, though transport emissions are notoriously hard to reduce. Cleaner engines or affordable hybrids have been slow to emerge. Undeterred, Mr. Macron pushed ahead with a series of punitive tax hikes to discourage driving.

The protesters in Paris will be expected to pay much of the up to €8 billion annual tab for a minuscule global benefit—that’s how much tax revenue Mr. Macron thinks his levies will raise. This is preposterous in an economy that still has an 8.9% jobless rate (21.5% for the young) and will struggle to hit 2% annual GDP growth. Yellow Vests from less prosperous rural areas, who depend on cars for daily life, know it. They’re insulted when Mr. Macron tells them to wait for better public transport or to carpool—yes, he really said that. They also assume that Paris will waste a fuel-tax windfall on boondoggles such as unreliable renewable power to replace zero-emissions nuclear plants.

The carbon tax revolt is world-wide. Voters in Washington state last month rejected a carbon tax that would have started at $15 per ton of emissions and climbed $2 a year indefinitely. Washington ranks 25th among American states in carbon emissions and when we tried to estimate its contribution to global emissions our calculator couldn’t handle a number that small. Gov. Jay Inslee and green activists nonetheless wanted voters to pay $2.3 billion in taxes over five years.

A carbon tax is in theory a more efficient way than regulation to reduce carbon emissions. But after decades of global conferences, forests of reports, dire television documentaries, celebrity appeals, school-curriculum overhauls and media bludgeoning, voters don’t believe that climate change justifies policies that would raise their cost of living and hurt the economy.