A team of researchers in Morocco have unearthed rocks carved with what appear to be petroglyphs of meteors crashing through space towards Earth, suggesting ancient Moroccan people might have witnessed these martian invaders striking the surface of our planet. 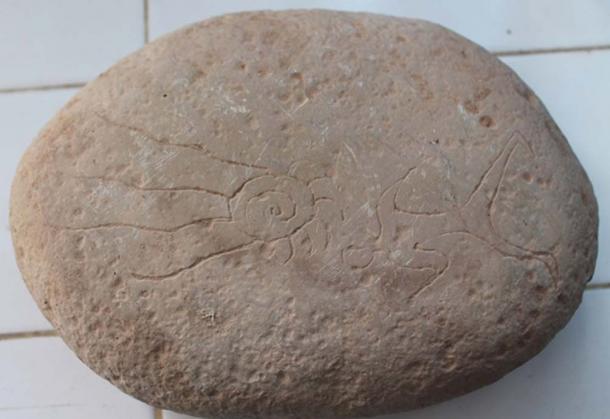 Figure two of the petroglyphs of the Tissint meteorite.  ( MeteorNews)

The team of five Moroccan researchers who found the rocks told reporters that they have discovered the stones near “Ida Oukazou village west of the High Atlas, in Essaouira province” and that they have “compared the engravings to other petroglyphs discovered previously in the region.”  To test their notion that the symbols carved into the stones actually depicted meteorites, “The researchers also gathered testimonies from eyewitnesses of the fall of the Tissint meteorite in 2011, to reach the conclusion that the petroglyphs date back to ancient time, albeit not providing an idea on how old the engravings are,” reported  MeteorNews on November 18. 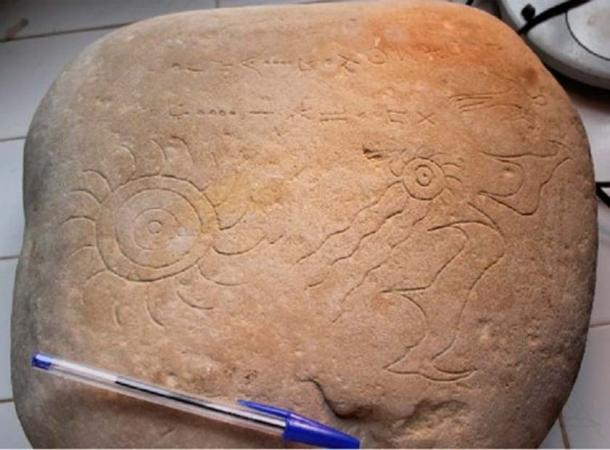 The stones are adorned with images appearing to be sun or stars as well as meteors, man and animals. Abderrahmane Ibhi/ MeteorNews

The Tissint meteorite was a hail of martian meteorites that crashed to Earth in Tata province in the Guelmim-Es Semara region on July 18, 2011. In an article in Space they were referred to as “ultra-rare martian rocks blasted off the Red Planet by an asteroid strike.” An article in NewScientist details how in Morocco’s High Atlas mountains the twin lakes of Isli and Tislit (nicknamed the Moroccan Romeo and Juliet ) “were impact craters, formed when an asteroid hurtling towards Earth split in two about 40,000 years ago. It was over 100 meters wide… The biggest asteroid to fall in Morocco.” 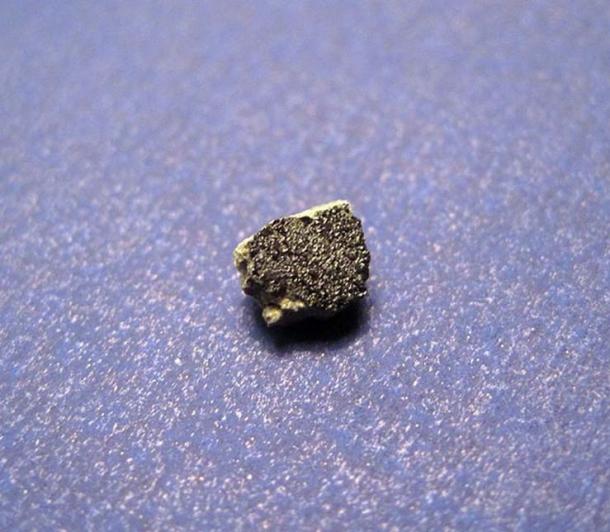 This martian meteorite fell to earth on July 18, 2011 in a valley east of Tata, Morocco. This historic event marks the first witnessed fall of a martian meteorite since Zagami in 1962! Tissint is a shergottite with glossy black fusion crust and a light gray matrix. (Jon Taylor / CC BY-SA 2.0 )

Why Are so Many Meteorites Discovered in Morocco?

In the New Scientist article, scholar Abderrahmane Ibhi from Ibn Zohr University in Agadir said there are ‘three’ primary reasons so many meteorites are found in Morocco. The first is “the landscape” -meteorites are easily revealed by windswept sand in which their dark color makes them stand out, the dry climate helps preserve them far better than a humid one. Secondly, “the well-distributed population gives people a greater chance of stumbling upon them” and thirdly, “Morocco’s political stability is a plus, making it safer than in other countries to wander around searching for meteorites.”

What is the Difference Between a Meteor, a Meteorite, and a Meteoroid?

Caused when fragments break away from comets or asteroids, or when collisions cause ejected debris from bodies such as the Moon or Mars, a ‘meteoroid’ is a small metallic or rocky body zipping through outer space; significantly smaller than an asteroid, ranging from small specks to one-meter-wide objects. An article on ABC Science informs that, “When a meteoroid, comet, or asteroid enters Earth’s atmosphere at a speed typically in excess of 20 km/s (72,000 km/h; 45,000 mph), aerodynamic heating of that object produces a streak of light, both from the glowing object and the trail of glowing particles that it leaves in its wake. This phenomenon is called a meteor or shooting star.”

If, however, one of these objects manages to get through Earth’s atmosphere as a ‘meteor’ and impacts the ground it becomes a ‘meteorite’ and the article on ABC Science estimates that “15,000 tonnes of meteoroids and different forms of space dust enter Earth’s atmosphere each year.” Astronomer Dr Fred Watson from the  Australian Astronomical Observatory  says that scientists estimate “15,000 tonnes a year is considerably more than previously thought,” and he added “When you think about it, that’s an extraordinary amount of stuff falling down to the Earth’s surface. It’s a train’s worth of stuff.” 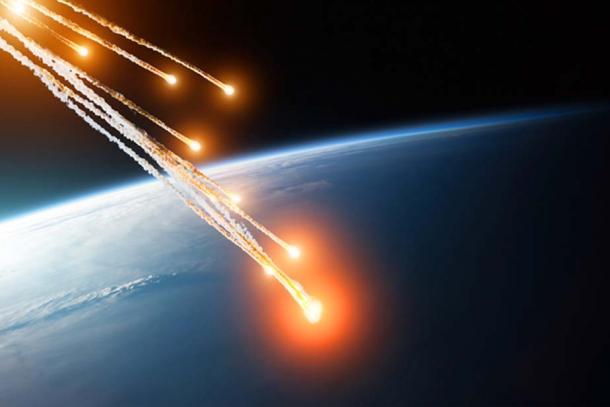 Falling burning flares of several meteorites of asteroids in the Earth’s atmosphere. Elements of this image furnished by NASA. ( aapsky / Adobe)

Many Astrological Events have been Recorded by Ancient Moroccans

Returning to the newly discovered symbols on the Moroccan stones, which look like brilliant orbs with long tails, in an academic paper written about ancient cometary and astronomical rock art, The Sky On The Rocks , scientist Fernando Coimbra provides “nine case studies of cometary phenomena depicted in ancient rock art.” Coimbra details a set of ancient symbols found in the  Divination by Astrological and Meteorological Phenomena also known as  Book of Silk,  a record of 29 comets that appeared over a period of about 300 years observed by Chinese astronomers of the Western Han Dynasty  (202 BC – 9 AD). The second comet from the left is identical to one of the carvings found on the stones in Morocco with four long tails. 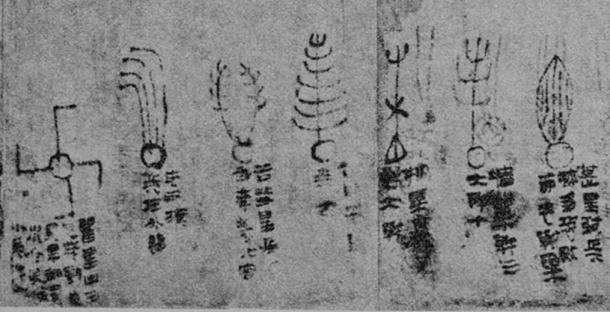 Detail of Han Silk “Comet diagram” from the Divination by Astrological and Meteorological Phenomena. In divination, those comets were thought to be the sign of epidemics of warfare and plague.  (China Arts / Public Domain )

The Negative Significance of Each Comet

According to an article on Art In Society , “each of the comets which appear in these drawings is identified by ‘name’, together with notes pertaining to their significance. Comets were classically negative omens with descriptions such as ”General dies”, “Rebellion in the State”, “State perishes”, ”Death in the State”, “Death among the Generals”, “Disease in the world” and so on. It can be speculated that the ancient Moroccan people had similar prophetic beliefs surrounding meteorites and this is why the phenomena was symbolized and recorded on the newly unearthed carved stones.

Top image: The discovery of mysterious petroglyphs suggests that a meteor has been observed in ancient times in Morocco.  Source: Abderrahmane Ibhi/ MeteorNews

Read More:Archaeologists Think They Have Discovered Evidence Of A ‘Lost Civilization’