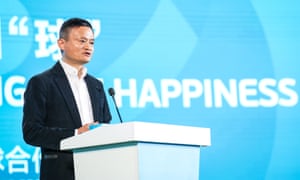 On the outskirts of Hangzhou, eastern China, in Alibaba’s Cloud Town, a Silicon Valley-style working and leisure hub, cutting-edge research in artificial intelligence (AI) and smart city developments at one of China’s largest tech companies are showcased. It is a half-empty dystopia of almost comic proportions where the future of automation and infrastructure in southern China is played out. While Alibaba exhibitions and conferences occur sporadically, the full scope of what goes on there remains hidden.

Having long claimed to be apolitical, Jack Ma, the billionaire co-founder and executive chairman of the tech giant Alibaba, was recently revealed to be a member of the ruling Communist party of China (CCP). It’s another in a long list of links between corporate and state apparatus that stretch far beyond the borders of China. Nevertheless, a glimpse into the projects the company is working on in Cloud Town, considered in light of these revelations, should set the alarm bells ringing with fear of a dystopian future of state and corporate control.

Computers have learned to make us jump through hoops

Technologies in development at Cloud Town range from AI pedestrian crossing lights that use facial recognition to identify the age of a road-crosser and give them a longer green light if they are old/slow enough, to AI drone cars that can respond to passengers needs.

The greatest feature of the car, explained the proud representative, is that its media panel, linked to the user’s smartphone, reads patterns of movement, food choices and potentially even photos and comments, and then crosses this with millions of data sets to make predictions about what the user might like to eat and how they might like to travel there or have the food travel to them. In short, the new citizen outsources part of their decision-making processes, and maybe even part of their desire, to Alibaba. Our very impulses are mapped and planned in advance. The triangulation between data, predictive technology and desire could be the single most important relationship taking us into the dystopian smart city future.

It’s not so far from the technology of Google Now that has made headlines since plans for its implementation in 2012. Here a previously neglected aspect becomes visible: Alibaba could use its complex algorithms to privilege food outlets that use Alipay rather than those that use WeChat pay or have no e-payment system, for example. Likewise, if Google answers your questions before you’ve asked them, it also moves you down paths you might never have otherwise taken. It’s the early implementation phase of a predictive tech revolution in which desire is not only predicted but incrementally edited to suit particular agendas – in this case corporate ones.

But the possibility made crystal clear by the revelation that Ma is now (and perhaps has been for some time) a formal member of the CCP is that this process of editing a population’s movements and desires might not only be in the interests of corporate parties but of the closely associated state.

Weaponised AI is coming. Are algorithmic forever wars our future?

Alibaba’s rival Tencent is another major tech company with close connections to the Beijing government. Its heat map feature tells users where crowds of people are forming – taken to its extreme, such a tool could be used by authorities to prevent street protests. What Alibaba seem focused on, however, is developing subtler ways to organise the movements and even desires of citizens in the future city. Will that too be in the service of the corporate state?

The danger here is that the focus in the west will be on what this shows about China’s extreme dystopian tendencies, which we posit in opposition to our own apparently democratic landscape. The tendency is to report on China’s hi-tech authoritarian future as if it is not our own. In fact though, what seems oddest about this revelation is how it chimes with patterns we’ve seen, at least in the US. As Srećko Horvat has pointed out, it is significant that former Google CEO Eric Schmidt was appointed head of a Pentagon committee designed to integrate Silicon Valley into the intelligence services.

Ultimately, this is less about communism than it is about a new brand of corporate tech-driven capitalism. Without more visibility and awareness of what’s being built, we cannot see how these technologies are re-organising their citizens.