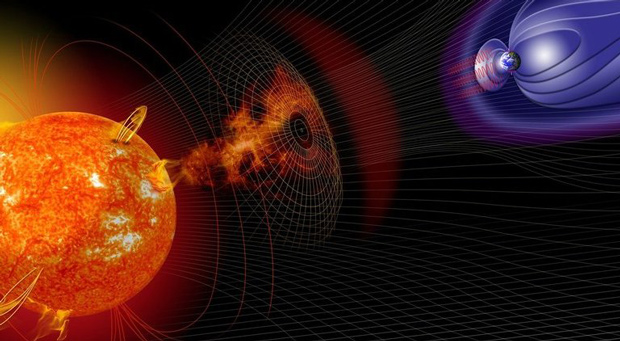 Massive solar flares could create electricity blackouts, destroy computers along with the internet and all communications, the UK Met Office warned. The British government agency told ministers that solar storms could result in massive blackouts due to the intense magnetic fields over Earth which could destroy electronics and even set them on fire, according to the Sunday Times. The report which was co-authored with scientists from the British Antarctic Survey, Rutherford Appleton Laboratory, and Cambridge University, urged the UK to create an early alarm system because of high risk.
Unless a particular satellite network is constructed to detect solar flares, the Uk is now at risk of being crippled by huge electrical disturbance. “We find that for a one-in-100-year event, with no space weather forecasting capability, the gross domestic product loss to the United Kingdom could be as high as £15.9bn,” The Met Office study said. “With existing satellites nearing the end of their life, forecasting capability will decrease in coming years, so if no further investment takes place, critical infrastructure will become more vulnerable to space weather.” According to Fox News, in 1859 a giant solar flare doubled the sun’s brightness for a few minutes, followed by a surge in magnetism that caused powerful electrical currents in telegraph wires across Europe igniting widespread fires.
Insiders Reveal Another such solar event in 1989 struck Quebec in Canada and burned out power cables led to a blackout. Researchers fear another such event would burn out high-voltage wires and substations across the United Kingdom. Last month, Neon Nettle reported a massive hole had opened up in the Sun’s corona, as scientists confirmed they were officially on watch for a geomagnetic storm. Auroras will be likely across much of North America as the Sun descends into a solar minimum. A storm watch for a G2-level solar storm has been issued by the National Oceanic and Atmospheric Administration (NOAA) – which is a moderate storm on the 5-level scale, with G5 being the highest, according to science alert.