A medical scanner can take 3D images of the entire body at once for the first time ever.

A combination of two commonly-used scanners – positron emission tomography (PET) and X-ray computed tomography (CT) – the EXPLORER scanner offers a fascinating insight to the inner workings of the human body.

The machine produces a 3D video that could help diagnose disease, track the spread of cancer or infections, and develop new medicines by creating a whole-body diagnostic scan in 20-30 seconds.

Professors Simon Cherry and Ramsey Badawi, from the University of California, Davis, have spent millions of dollars and more than a decade building the machine. 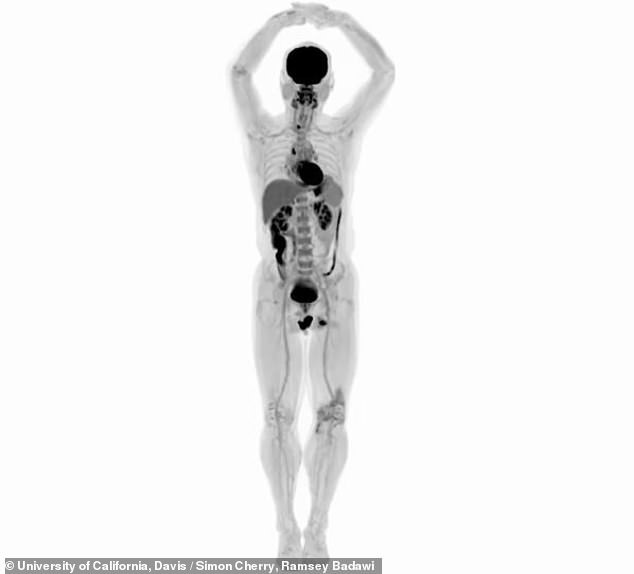 The EXPLORER scanner is the first of its kind to be able to scan the entire body in 3D in one go (pictured: A front view of the human body), and its inventors claim it is faster and higher quality than existing machines being used in hospitals.

Professors Simon Cherry and Ramsey Badawi, from the University of California, Davis, have spent millions of dollars and more than a decade building the machine.

‘While I had imagined what the images would look like for years, nothing prepared me for the incredible detail we could see on that first scan,’ Professor Cherry said.

The EXPLORER works using radiation, and is a combination of a PET scan and CT scan, both of which are used every day in healthcare around the world.

But those machines can only image certain sections of the body and have limitations, such as requiring patients be injected with higher doses of radiation.

EXPLORER can produce higher-quality scans than has ever been possible in medicine, and is up to 40 times faster than existing scanners, taking 20-to-30 seconds to produce a scan of the whole body.

Professor Badawi, chief of nuclear medicine at UC Davis, said he was ‘dumbfounded’ by the machine.

‘The level of detail was astonishing,’ he said. ‘We could see features you just don’t see on regular PET scans.

‘And the dynamic sequence showing the radiotracer moving around the body in three dimensions over time was, frankly, mind-blowing. There is no other device that can obtain data like this in humans.’ 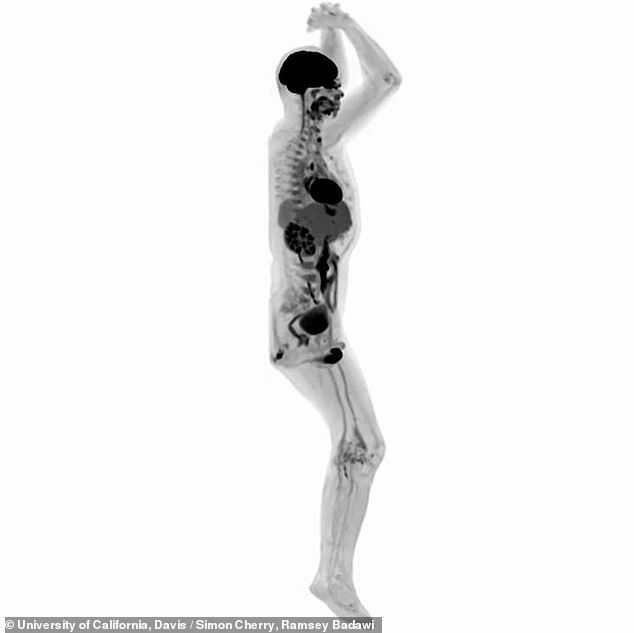 The EXPLORER can produce a scan of the body in less than 30 seconds (pictured, a profile scan of a human body), or it can be tuned to be able to detect radiation at very low levels, meaning it could be safer to use with children if they need multiple scans

PET scans, which produce 3D images of the body, require a radioactive substance, known as a tracer, to be injected into the patient.

HOW DO MEDICAL SCANS WORK?

PET scans and CT scans are both commonly used imaging techniques to give medics a view inside the human body.

Both involve the patient lying partly in a large tubular scanning machine while the scanner rotates to picture the body from the front, back and sides.

They work by measuring radiation as it passes through or out of the body, similarly to X-rays but on a more sensitive scale, and the image is mapped by a computer.

For PET scans a patient has to be injected with the radioactive substance first, and this may happen in some CT scans.

The radiation can then be sensed at different levels in different tissues in the body, giving the radiographer a shaded or colour-coded image of the part of the body they’re looking at.

This can be problematic for children who require regular scans because the radiation could build up to harmful levels.

But the extra-sensitive EXPLORER can work with 40 times less radiation than a current PET scan.

Professor Cherry said: ‘The tradeoff between image quality, [scan] time and injected radiation dose will vary for different applications, but in all cases, we can scan better, faster or with less radiation dose, or some combination of these.’

The professors claim the scanner could have countless uses in medicine, such as improving diagnoses and tracking the progression of a disease.

For example, medics may be able to find every place a cancer has spread to from a single scan, which currently can require multiple images.

They could also track blood flow around the body, measure how well sugar is being absorbed or watch how drugs move around.

The scientists plan to put the first scanner to work in Sacramento, California, and to start using it on patients from June 2019.

‘I don’t think it will be long before we see a number of EXPLORER systems around the world,’ Professor Cherry added. 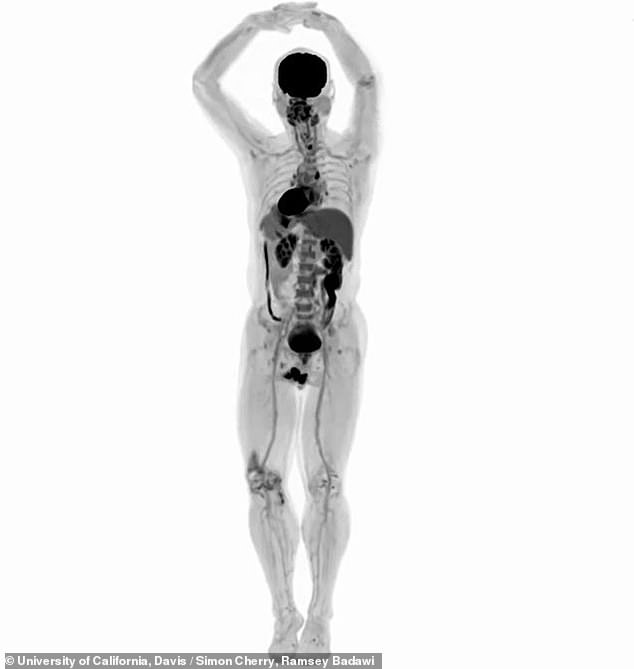 The scanner’s inventors say it could be used to track where cancer has spread and follow infections which move around the body. One said: ‘I don’t think it will be long before we see a number of EXPLORER systems around the world’

‘Now, our focus turns to planning the studies that will demonstrate how EXPLORER will benefit our patients and contribute to our knowledge of the whole human body in health and disease.’

The machine was developed with the help of Chinese manufacturer United Imaging Healthcare, and grants from the National Cancer Institute and National Institutes of Health.

The first scans produced by the machine will be presented at the Radiological Society of North America meeting later this week.

Read More:Ministry Of Defense Has A Gravity Scanner That Can See Through Walls