The FBI now classifies the far-right Proud Boys as an “extremist group with ties to white nationalism”, according to a document produced by Washington state law enforcement.

The FBI’s 2018 designation of the self-confessed “western chauvinist group” as extremist has not been previously made public. 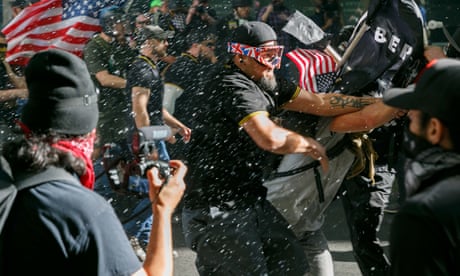 Who are the Proud Boys, ‘western chauvinists’ involved in political violence?

The Proud Boys was founded by the Vice Media co-founder Gavin McInnes. McInnes has insisted that his group is not white nationalist or “alt-right” but the Proud Boys have a history of misogyny and glorifying violence. The Southern Poverty Law Center (SPLC) lists them as a hate group.

The document also says: “The FBI has warned local law enforcement agencies that the Proud Boys are actively recruiting in the Pacific north-west”, and: “Proud Boys members have contributed to the recent escalation of violence at political rallies held on college campuses, and in cities like Charlottesville, Virginia, Portland, Oregon, and Seattle, Washington.”

The report, and the FBI’s warning to south-west Washington police agencies about the Proud Boys’ role in escalating violence at these events came in August, two months before the group was involved in an infamous weekend of street violence in New York City and Portland, and not long after they participated in street violence in downtown Portland on 30 June.

The document, provided to the Guardian by the government transparency non-profit Property of the People, was part of an internal affairs investigation into a probationary deputy in the Clark county sheriff’s department.

The former clark county deputy, Erin Willey, was fired last July after a photo of her wearing a “Proud Boys Girls” sweatshirt was published by the Vancouver, Washington newspaper the Columbian. The Proud Boys Girls is the female auxiliary of the men-only group founded by McInnes in 2016.

The author of the document, headquarters commander Michael McCabe, is in charge of internal affairs, training, background investigation and courthouse security in the Clark county sheriff’s department.

After confirming the authenticity of the document, he told the Guardian in a telephone interview that the FBI’s classification of the Proud Boys as an extremist group was revealed to him in “a briefing we were given by the FBI” on 2 August, at Clark county’s west precinct.

The briefing including the Proud Boys was delivered by an FBI analyst, according to information forwarded to the Guardian by McCabe.

It touched on topics including “How the FBI tracks hate/extremist groups”, “Brief history of these groups in the Pacific NW”, “A description of currently active groups with a focus on the Portland/Vancouver area”, and “Current trends or concerns over law enforcement officers/employees involvement with these groups”.

The document says that Willey was an active Proud Boys Girls member between November 2016 and October 2017, and in February 2017 she “actively participated in the manufacturing, advertising and selling of Proud Boys Girls’ merchandise on a website”.

The document concludes that membership in the Proud Boys may constitute a violation of the Clark county sheriff’s department oath to support and protect the laws of the United States, since Proud Boys “members have been documented as having called for the closure of all prisons, the issuing of firearms to everyone, the legalization of all drugs, the deportation of all illegal immigrants and the shutdown of the government”.

Another concern expressed in the document produced by McCabe – which was handed to the sheriff, Chuck E Atkins, so he could make a decision on Willey’s future in the department – was the possibility that the deputy’s membership in the group would constitute a so-called “Brady violation”.

The Brady doctrine requires prosecutors to disclose any potentially exculpatory evidence to defenses in the discovery phase of criminal trials.

Membership in the Proud Boys, the document says, may constitute “evidence that a deputy is biased or has some motive to lie” which could constitute a prosecutorial risk.

According to the report, Willey was placed on administrative leave after the Columbian contacted the sheriff’s department on 2 July. She was fired on 17 July, before the report was completed, and just before the Columbian published its story.

The report also states Willey’s belief that the photo of her in a Proud Boys sweatshirt was given to the Columbian by her former boyfriend, and “active Proud Boy member”, Graham Jorgensen.

Jorgensen has been a regular participant in rallies organized by the Clark county-based Patriot Prayer group, whose events have included Proud Boys, and which have frequently culminated in violence.

Other law enforcement agencies have discovered Proud Boys in their midst and responded in a similar manner. A month after Willey was fired, Brian Green, a patrol deputy in Louisiana, was also let go after social media posts revealed his allegiance to the group.

Willey and Jorgensen could not be reached for comment.

In Clark county, Proud Boys have been integral to the Patriot Prayer movement, which organizes rightwing street marches and rallies in Portland, Seattle, Vancouver and other cities in the Pacific north-west. 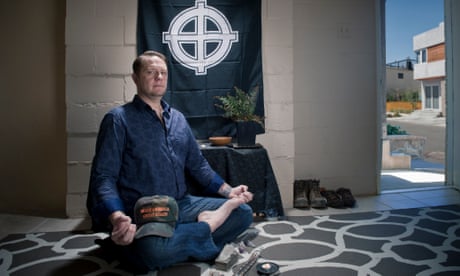 Asked about the apparent high level of Proud Boy activity and rightwing organizing in Clark county, McCabe said: “I think both as an agency and me, personally, we worry about that.

“Anybody who has watched the news recently can see that the United States appears divided. Any time you are dealing with groups who are espousing hate, it’s certainly a concern for law enforcement,” he added.

McCabe pointed to a joint statement by Atkins and the Clark county prosecuting attorney Tony Golik in the wake of reporting on Willey’s firing.

In that statement, the men said in part: “We reject hate, bigotry, harassment, violence or the inciting of violence, and all actions intended to harm or intimidate others.”

The FBI did not directly address the designation or the briefing in response to specific email questions, but did say that while “the FBI does not and will not police ideology”, the agency “regularly assesses intelligence regarding possible threats and works closely to share that information with our federal, state and local law enforcement partners”.

Read More:Summer Of Rage As ‘Progressive Leaders’ Encourage Protestors To ‘Rise Up’

Read More:Charlottesville Police Ordered To ‘Stand Down’ – Affectively Allowing War To Break Out

Read More:Rise Of The Militas: Patriot Officials Being Elected In Oregon

Read More:After Being Ordered To ‘Stand Down’ For ANTIFA And ‘Black Lives Matter’ – San Fran Police Vow To ‘Stamp Out’ Violence At ‘Patriot’ Rally