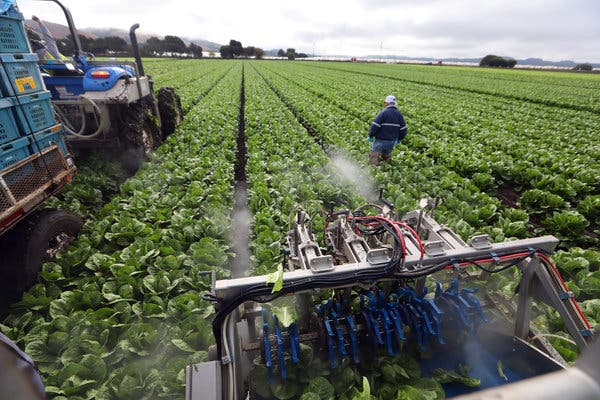 SALINAS, Calif. — As a boy, Abel Montoya remembers his father arriving home from the lettuce fields each evening, the picture of exhaustion, mud caked knee-high on his trousers. “Dad wanted me to stay away from manual labor. He was keen for me to stick to the books,” Mr. Montoya said. So he did, and went to college.

Yet Mr. Montoya, a 28-year-old immigrant’s son, recently took a job at a lettuce-packing facility, where it is wet, loud, freezing — and much of the work is physically taxing, even mind-numbing.

Now, though, he can delegate some of the worst work to robots.

Mr. Montoya is among a new generation of farmworkers here at Taylor Farms, one of the world’s largest producers and sellers of fresh-cut vegetables, which recently unveiled a fleet of robots designed to replace humans — one of the agriculture industry’s latest answers to a diminishing supply of immigrant labor.

The smart machines can assemble 60 to 80 salad bags a minute, double the output of a worker.

Enlisting robots made sound economic sense, Taylor Farms officials said, for a company seeking to capitalize on Americans’ insatiable appetite for healthy fare at a time when it cannot recruit enough people to work in the fields or the factory.

A decade ago, people lined up by the hundreds for jobs at packing houses in California and Arizona during the lettuce season. No more. 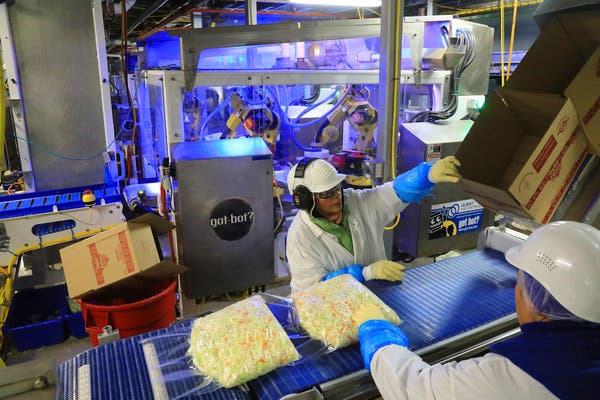 “Our work force is getting older,” said Mark Borman, chief operating officer of Taylor Farms. “We aren’t attracting young people to our industry. We aren’t getting an influx of immigrants. How do we deal with that? Innovation.”

Moving up the technology ladder creates higher-skilled positions that can attract young people like Mr. Montoya, who is finishing a computer science degree, and bolster retention of veteran employees who receive new training to advance their careers.

“We are making better jobs that we hope appeal to a broader range of people,” Mr. Borman said.

In a 2017 survey of farmers by the California Farm Bureau Federation, 55 percent reported labor shortages, and the figure was nearly 70 percent for those who depend on seasonal workers. Wage increases in recent years have not compensated for the shortfall, growers said.

Strawberry operations in California, apple orchards in Washington and dairy farms across the country are struggling with the consequences of a shrinking, aging, foreign-born work force; a crackdown at the border; and the failure of Congress to agree on an immigration overhaul that could provide a more steady source of immigrant labor.

Farmhands who benefited from the last immigration amnesty, in 1986, are now in their 50s and represent just a fraction of today’s field workers. As fewer new immigrants have arrived to work in agriculture, the average age of farmworkers has climbed — to 38 in 2016, according to government data, compared with 31 in 2000.

Maria Guadalupe, a recent graduate of the company-sponsored technology course, has gone from packing bagged salads into boxes to setting up and monitoring robots that do her old job. “This is much better work,” she said.CreditJim Wilson/The New York Times 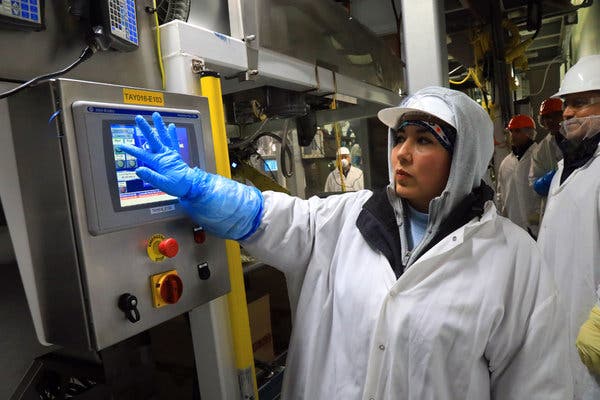 Still, about three-fourths of crop workers in the country were born abroad, and they are overwhelmingly undocumented. Beefed up border enforcement has rendered “follow-the-crop” migration within the United States a “relative rarity,” according to the United States Department of Agriculture.

Growers in many states, like Florida, a citrus behemoth, have turned to the H-2A guest worker program to import labor from Mexico. But they complain of government red tape that delays arrivals and of unpredictable weather patterns that can prompt fruit to ripen prematurely, before workers are scheduled to show up — which both result in losses.

Taylor Farms brings in about 200 workers a year on the visas, about 10 percent of its seasonal labor force. “The program is not always dependable and our items are perishable,” said Chris Rotticci, who runs the harvest automation division of Taylor Farms, which is also looking for ways to replace humans. “But we have to do it. We don’t have enough people.”

Ideally, growers say, Congress would pass a bill to legalize undocumented farmworkers who are already here and encourage them to stay in the fields, as well as include provisions to ensure a steady flow of seasonal workers who could come and go with relative ease.

California’s $54 million agricultural industry cannot afford to wait. As the country’s epicenter of both technology and agriculture, the state is leading the move to automate in the fields and packing plants. 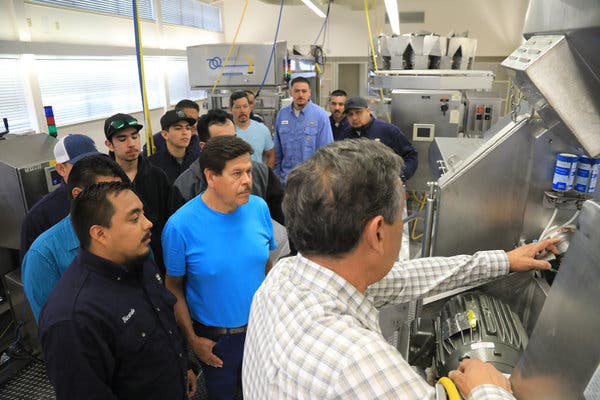 Driscoll’s, the berry titan based in Watsonville, Calif., has invested in several robotic strawberry harvesting start-ups, including Agrobot, which uses imaging technology to assess a berry’s ripeness before it is harvested. It is currently in test phase.

Last spring, Christopher Ranch, a giant in garlic, began using a 30-foot-tall robot to insert garlic buds into sleeves, the nets into which they are bundled for sale in supermarkets.

“It’s a real workhorse,” said Ken Christopher, executive vice president of the company, whose headquarters are in Gilroy, Calif. “We can do more in a half shift than we could do in a full shift.”

Bartley Walker, whose family business rents and sells tractors, now offers a robotic hoeing machine with a detection camera capable of identifying the pesky weeds that sprout between row crops like broccoli and cauliflower.

“The weeder is not as precise as a human with a hoe,” Mr. Walker said, “but it extracts 90 percent of the weeds.” What is more, one machine replaces 11 workers.

California is leading the move to automate in the fields and packing plants.CreditJim Wilson/The New York Times 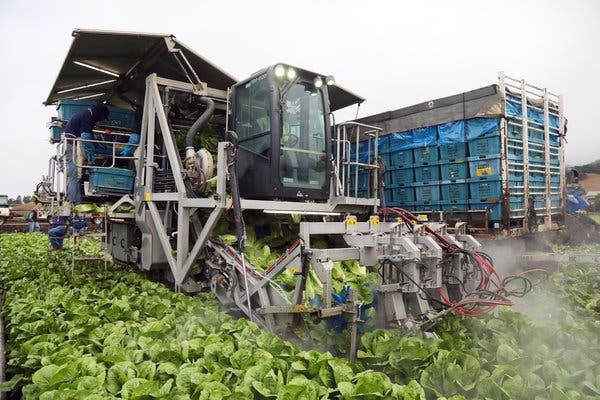 About 60 percent of the romaine lettuce and half of all cabbage and celery produced by Taylor Farms are harvested with automated systems. The company has partnered with an innovation firm, which previously focused on automated vehicle assembly, to develop a machine to begin harvesting broccoli and iceberg lettuce within two years.

All told, the company plans to double the number of automated harvesters, which cost about $750,000 each, in the fields each year — until nearly everything can be machine-picked.

On a recent morning, a machine that employs water-knife technology severed romaine heads as it moved through row after row of a lettuce field that stretched as far as the eye could see. The lettuce traveled on a belt to the machine’s platform, where 12 men and women inspected, trimmed and boxed it.

Their shift had started at 2 a.m. under a torrential downpour. The workers wore face scarves to guard against the cold, as well as hairnets, aprons and gloves midway up their arms.

In the distance, a crew of 24 harvested the old-fashioned way, standing in the muck, knife in hand, and stooping over again and again to cut lettuce. Every one of the workers was Hispanic.

The old-fashioned way of harvesting requires stooping over again and again to cut the produce.CreditJim Wilson/The New York Times 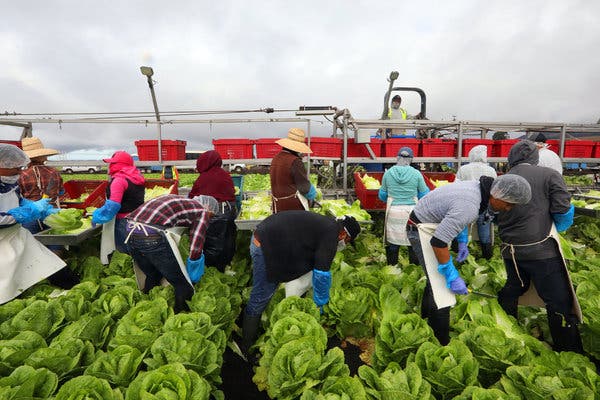 Guadalupe, 55, who described herself as the “foreman,” watched over them. Not one of her six children, all adults, works in agriculture. “They did this during vacation when they were teenagers. Now they have office jobs,” said the Mexican immigrant, who would only give her first name.

Wheat, soybean and cotton crops have long used automation. Delicate fruit, like peaches, plums and raspberries, as well as vegetables like asparagus and fennel, will remain labor intensive for the foreseeable future.

It is difficult to replace the human eye and hand — and technology is still in its infancy.

“It’s going to take years to develop technology that can recognize when it’s the right time to harvest our produce and do it without bruising the produce,” said Tom Nassif, president of Western Growers, a large association that represents agricultural concerns in Arizona, California, Colorado and New Mexico.

But given work force challenges, “it’s a long-term solution that must be pursued with vigor,” said Mr. Nassif, whose association opened an innovation center in Salinas two years ago to nurture agricultural technology start-ups.

Labor challenges are the main reason Taylor Farms is building a second plant in Mexico, due to open early next year. “If we can’t find workers here, it is a logical place to grow,” said Mr. Borman, the executive.

Abel Montoya, who applied to work at Taylor Farms after reading about the technology course it offered employees. “Advanced technology in agriculture is going to be huge,” he said.CreditJim Wilson/The New York Times 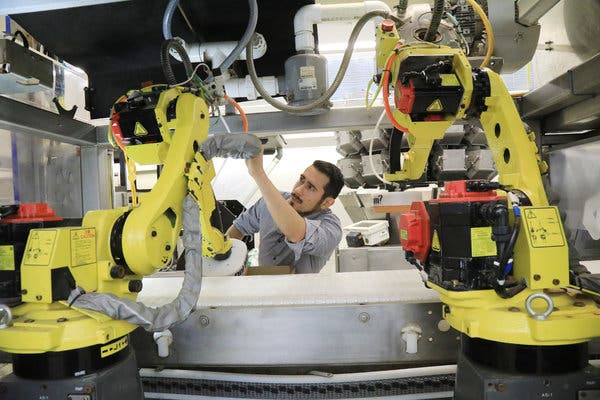 Inside the processing plant in Salinas, where the temperature hovers around 33 degrees Fahrenheit, workers don heavy coats under their work smocks and headbands under their hard hats to keep their ears warm. On their hands, they wear two layers of gloves.

On a recent afternoon, forklift drivers scurried about delivering bins of lettuce to machines inside the plant, where it was cut according to specification, and washed. Dozens of workers ran spinners the size of industrial dryers that removed excess water from the greens.

At several stations, a pair of robots with yellow arms that end with a round suction head gripped five-pound packages of shredded lettuce, one by one, and placed them into boxes moving on a belt. Nearby, larger robots did the backbreaking, repetitive work of lifting and stacking filled-up cartons.

Maria Guadalupe, 43, a recent graduate of the company-sponsored technology course, has gone from packing bagged salads into boxes to setting up and monitoring robots that do her old job. “This is much better work,” she said above the din of the production floor.

Currently, nine robots are in use at the Salinas plant; most labor is still performed predominantly by humans.

“We are still at prototype phase,” said Marissa Gutierrez, the human resources manager. “We’ll get more robots. But we are always going to depend on human labor, even as we automate.”

At the training center next door, Mr. Montoya and 15 other employees learned about programming, engineering and the operation of equipment. An interpreter translated the instructor’s explanation from English into Spanish for some of the workers.

Mr. Montoya, who was raised in Yuma, Ariz., where the bulk of greens consumed by Americans in the winter are grown, applied to work at Taylor Farms after reading about the on-site technology course it offers employees.

“Advanced technology in agriculture is going to be huge,” he said, marveling at the precision and dexterity of the robots. “It’ll open up opportunities for me.”

Read More:Experts Predict That 30% Of Jobs Will Be Taken Over By Robots In The Next 10 Years

Read More:Farmers In America Are Killing Themselves In Staggering Numbers