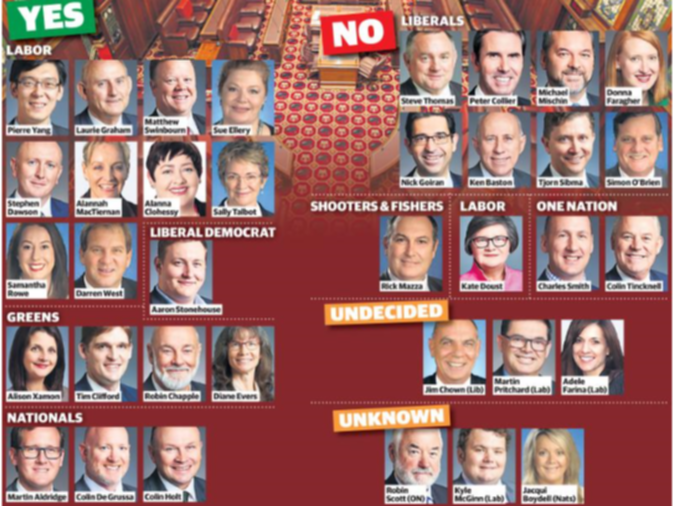 At least half the 36 MPs in Parliament’s Upper House plan to vote in favour of voluntary euthanasia laws, which would be enough to get the legislation passed.

As many as 24 politicians may be prepared to support the Bill being put forward by the State Government next year.

The West Australian spoke to most Upper House MPs yesterday, after the establishment of an expert panel to draft new legislation supporting voluntary assisted dying.

The Bill is expected to sail through the Labor-dominated Lower House.

Apart from the 18 Upper House members who said they would vote for the new laws, three MPs — Labor’s Adele Farina and Martin Pritchard and Liberal Jim Chown — were undecided and said they could be swayed either way in exercising a conscience vote on the issue.

Another three MPs — Robin Scott, Jacqui Boydell and Kyle McGinn — could not be contacted.

On the crossbenches, Liberal Democrat Aaron Stonehouse and the four Greens MPs appear set to support the Government Bill. Up to three of the four Nationals MPs back voluntary euthanasia as do at least 10 Labor MPs.

But it seems certain that eight out of nine Liberal MPs will vote against any attempt to make assisted dying legal in WA.

“It would be an undeniable shift in community values in a way we need to pause and comprehend,” North Metropolitan Liberal Tjorn Sibma said.

Upper House President Kate Doust is against voluntary euthanasia but would only vote if numbers were tied.

Greens MP Alison Xamon said her views had changed since she voted in favour of a Bill in 2010 that was defeated.

“I am probably least enamoured by the idea of this than my colleagues but I would support laws giving people a choice at this stage,” she said.

Labor MP Pierre Yang said he had “in-principle support” for the idea but was keen to see the legislation and expected long debate in the Upper House. He said there appeared to be overwhelming support in the community and pointed out that a committee of Parliament established to investigate if legislation was needed voted seven to one in favour.

One Nation WA leader Colin Tincknell said his views had also changed in recent years and he was less supportive of voluntary euthanasia.

“I just don’t believe I have seen a model that works,” he said.

“But being a pragmatic man, I believe this Bill will get through and so my aim is to work with the people who are in favour and make sure we don’t make mistakes.”

The most strident opponent in the Upper House is Liberal MP Nick Goiran, who was on the select committee and issued a minority report.

He said he was not ready to “roll over” on the issue.

Mr Pritchard said he sat “very much in the middle” of the debate and expected to be targeted by both sides.

“I will be very keen to see what is built into the legislation for palliative care,” he said.

“I have had some personal experiences with both my parents passing away last year.”