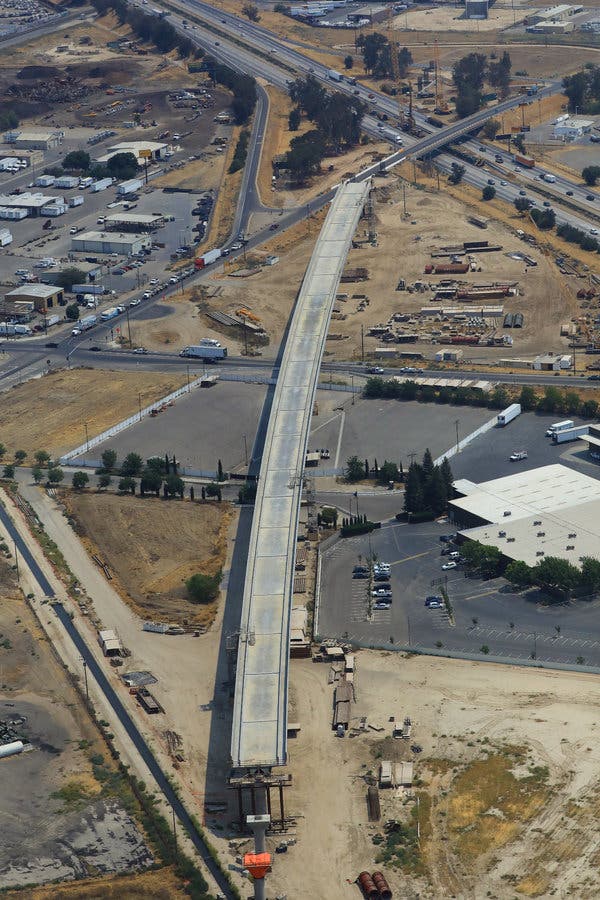 FRESNO, Calif. — It is vigorously opposed by Republicans, including President Trump. It has been plagued by escalating costs and delays. Californians are mostly against it. And a central question — how is it going to be paid for — remains unresolved.

But here in the Central Valley, far from the debates in Washington and Sacramento, the $100 billion Los Angeles-to-San Francisco bullet train has moved off the drawing board and onto 21 construction sites spread across five Central California counties.

Work began two weeks ago on one of the more ambitious pieces of the project — an overpass that will carry trains over a major highway in Fresno — and ground will be broken on three more viaducts in the next few months. Nearly 2,000 workers are on the job, starting as early as 5 a.m. to avoid the 110-degree afternoon heat. “Simply put, dirt is flying in the Central Valley,” the High-Speed Rail Authority declared in a recent business plan.

Yet for all the cranes, crews in orange vests, beeping trucks and fresh concrete, it remains far from certain that this project will ever be completed. In addition to the lack of funding, it faces opposition from both Mr. Trump and Kevin McCarthy, the Bakersfield Republican who is the House majority leader.

The continued delays and rising costs have fueled criticism that California, perhaps the most prosperous state in the nation, is squandering money on a transportation project that critics describe as a prime example of big government waste in a state controlled by Democrats.

“This is going to be the most expensive and slowest form of fast rail imaginable,” said Jim Patterson, a former Fresno mayor who is now a Republican member of the Assembly and a critic of the project.

For all the construction, the project faces the ever-present threat that a future governor may decide that state resources would be better used dealing with, to name one example, the housing crisis. Gov. Jerry Brown, a big proponent, is leaving office at the end of the year.

Work on the $100 billion project is under way at 21 construction sites in five counties, even though not all the necessary financing is in place. Workers installed reinforcing steel for a bridge across the San Joaquin River.CreditJim Wilson/The New York Times

“The project seems to make even less sense today,” said Joe Nation, a professor of public policy at Stanford University.

For advocates of high-speed rail, California under Mr. Brown has been a rare bright spot, while other ambitious government-funded bullet train proposals across the nation have struggled in the face of opposition from Republicans who are concerned about the costs and disruptions.

Gov. Rick Scott of Florida rejected Federal funds to help build a high speed rail line from Tampa to Orlando, saying it was too expensive for taxpayers. Attempts to upgrade rail service between New York and Boston on Amtrak’s Northeast Corridor have repeatedly faltered because of community opposition.

A high-speed rail line is moving ahead in Texas, connecting Dallas, Fort Worth and Houston, but it is being financed by private industry.

The high-speed train in California, championed by Mr. Brown, a Democrat, and Arnold Schwarzenegger, his Republican predecessor, is the most ambitious public transportation project underway in the nation today. It is moving ahead while other mass transit improvement ambitions — for the subway system in New York City, for an innovative elevated train line in Honolulu — have also been hamstrung by costs and opposition.

Mr. Brown’s enthusiastic backing has been crucial to the project’s advances. Gavin Newsom, the Democratic lieutenant governor and the leading contender to succeed Mr. Brown, has offered conflicting views of the project over the years; he has at times come close to opposing it outright, though in this campaign he has said he supported it, while expressing concern about costs and engineering challenges. By contrast, his Republican opponent, John Cox, has pledged unequivocally to abandon the project if elected.

Championed by Gov. Jerry Brown, a Democrat, and Arnold Schwarzenegger, his Republican predecessor, the high-speed rail line is the most ambitious public transportation project now underway in the country.CreditJim Wilson/The New York Times

The entire 800-mile line is scheduled for completion by 2033. There is no shortage of obstacles to what even the project’s biggest boosters call an ambitious timetable, including the engineering challenge of tunneling through the Tehachapi Mountains, a barrier between the Central Valley and Los Angeles.

The cost was originally supposed to be split among the state, the federal government and private business. But that arrangement faltered, as hopes for federal dollars faded with Republicans in power in Washington and businesses shied away from such an uncertain venture. As of now, the rail authority has come up with less than $30 billion of the necessary $100 billion, and the project’s costs are expected to continue to rise.

“The rest has to be found,” said Martin Wachs, an emeritus engineering professor at the University of California at Berkeley and a member of a committee appointed by the Legislature to review the project. “At the moment, 100 percent of the cost is going to be absorbed by the taxpayers.”

Beginning construction without all of the financing in place represents a strategic gamble by the rail authority, and by Mr. Brown, that once enough work is completed, future leaders will be loath to walk away from the project and leave a landscape of unfinished pillars, viaducts, bridges and track beds. Faced with reduced resources, the authority has altered its plans, and is now focused on finishing a 119-mile stretch of track from Bakersfield to Madera by 2022.

Brian P. Kelly, the head of the authority, argued that when this stretch of train is completed, people will rally around the project and the business community would become convinced of its viability.

“If I can get trains on the ground, Californians will start to see that this is something that we want,” he said. “There’s a lot of attention paid to what we don’t have. But we have significant fund-raising to get done what we have to get done.”

“Yes, the project has challenges,” Mr. Kelly said. “And the primary challenge for this same project is the same today as it was the day the voters passed

the bond: And that is, we don’t have enough money to build what we want to build.”

In downtown Fresno, more than 300 homes and businesses have been relocated, some by condemnation, to make way for the rail line. A mile-long network of viaducts, bridges and platforms is rising more than 60 feet over farmland.

“We had to shift this freeway here over by 100 feet,” said Diana Gomez, the Central Valley regional director of the California High-Speed Rail Authority, as she drove down a brand-new stretch of Highway 99 that was rebuilt to make way for the train line just north of this city.

The strategy of concentrating first on the section from Bakersfield to Madera puts off tunneling through mountains, which Mr. Kelly said could cost anywhere from $4 billion to $13 billion. It also means that people living in California’s two major population centers — San Francisco and Los Angeles — will see no sign of the project any time soon.

But John Hernandez, an employee with the Small Business Administration who lives in Fresno, said a high-speed train would transform his town, bringing in more visitors and making it easier for him to get to big cities.

“It would change my life,” he said. “I would be able to go places faster. I could get on a train at noon and be in San Francisco at 3 p.m.”

It has been 10 years since Californians voted to approve the $9.95 billion bond, a down payment on a project that was estimated at that time to cost $40 billion. Public enthusiasm is dwindling. While 48 percent of respondents said they supported the project in a U.S.C./Dornslife/Los Angeles Times poll done in May, just 31 percent said they wanted the state to continue building the rail line after they were told of the cost overruns.

Some construction crews on the rail project start work as early as 5 a.m. to avoid the Central Valley’s 110-degree afternoon heat. At a plant in Hanford, Calif., south of Fresno, workers fabricated precast beams for the rail line’s bridges and viaducts.CreditJim Wilson/The New York Times

Roger Dickinson, the executive director of Transportation California, a transit advocacy group, said the obstacles were significant, but the need for the train was critical.

“Looking at the need for increased environmentally sound ways of moving people between Northern and Southern California, it’s a project that still makes great sense, and I think it will be successful.”

Karen Philbrick, executive director of the Mineta Transportation Institute at San Jose State University, said the problems were not unlike those that confront any ambitious project.

“Approximately two dozen other countries have found H.S.R. feasible, including Uzbekistan,” she said, referring to high-speed rail. “And there is no reason it can’t be done here.”

It remains entirely conceivable that the state could walk away from the project, and put the acquired rights of way and new viaducts to other uses, like conventional freight or passenger trains. The question is whether the construction on display in the Central Valley will be enough to dissuade a future governor from doing that.

“Themore they can show what they have done, the harder it is to abandon the project,” Mr. Wachs said. “On the other hand, it can easily be argued that the cost of what they have done so far has so exceeded their projections that it’s not inappropriate for a governor to look at it and say, ‘Let’s not throw more good money after bad.’”

Mr. Kelly said that the merits of the project would ultimately pull it through.

An earlier version of this article misstated the surname of a professor of public policy at Stanford. He is Joe Nation, not Joe Nathan.