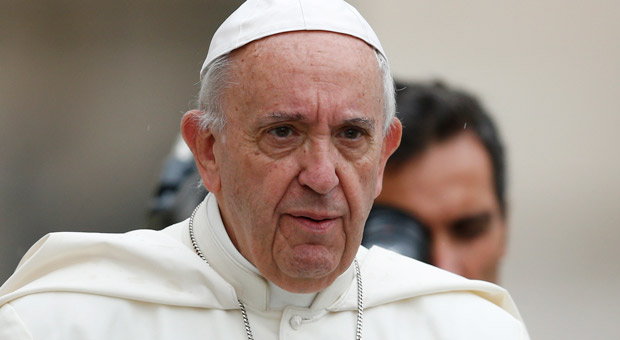 With the Catholic Church already waist deep in scandal, liberal Pope Francis is now faced with an even longer list of questions to avoid answering, after human remains have been discovered on a property belonging to the Vatican. Late on Tuesday night, fragments of human bones were discovered during the remodeling of a building attached to the Vatican’s embassy in Rome, Italy. An investigation has been launched into the gruesome discovery, yet officials have yet to reveal any details regarding the age of the remains or the person to whom they belonged. However, speculation has been mounting that the remains may belong to a 15-year-old girl who went missing in 1983 in a case that, campaigners believe, was covered up when Catholic Church officials were suspected in connection with her disappearance.
Speculation is mounting that the remains may belong to missing 15-year-old girl Emanuela Orlandi According to Crux Now, as soon as the bones were found, a Vatican statement said, the Vatican’s Gendarmerie corps informed Italian authorities as well as those within the Holy See, and an investigation has been launched.
Rome’s Chief Prosecutor, Giuseppe Pighatone, has tasked the Scientific Police and a mobile team of Rome’s police headquarters to study the remains in order to determine their age, sex and the date of the person’s death. Details are slim on what bones were found, however, according to Italian agency ANSA, the bones consist of a skull and teeth. In some quarters there is already speculation that the remains could belong to a young Italian teenager named Emanuela Orlandi, who disappeared in 1983 at the age of 15, and whose father at the time worked for the Institute for the Works of Religion, better known as “the Vatican bank.” In a case that has bedeviled investigators for 35 years, the Vatican said Rome’s chief prosecutor had been called in and forensic investigators are working to determine the age and gender of the bones as well as the date of death.
The Vatican’s statement didn’t mention Orlandi, but Italian media immediately linked her unsolved disappearance to the discovery of the bones. According to the Washington Post, The Vatican said merely that the bones were found during work near its Rome embassy in the upscale residential neighborhood of Parioli.
Press gathered outside the Vatican Embassy in Rome late on Tuesday as news emerged of the gruesome discovery Orlandi disappeared after leaving her family’s Vatican City apartment to go to a music lesson in Rome. Her father was a lay employee of the Holy See. Over the years, her case has been linked to everything from the plot to kill St. John Paul II to the financial scandal of the Vatican bank and Rome’s criminal underworld. The last major twist in the case came in 2012 when forensic police exhumed the body of a reputed mobster from the crypt of a Roman basilica in hopes of finding Orlandi’s remains as well. The search turned up no link. More recently, a leading Italian investigative journalist caused a sensation when he published a five-page document last year that had been stolen from a locked Vatican cabinet that suggested the Holy See had been involved in Orlandi’s disappearance. The Vatican immediately branded the document a fake, though it never explained what it was doing in the Vatican cabinet. The document was purportedly written by a cardinal and listed supposed expenses used for Orlandi’s upkeep after she disappeared. Mirella Gregori is another young Italian woman who also disappeared in 1983, just over a month ahead of when Orlandi went missing. Police are likely to make DNA comparisons to determine whether the bones belong to either of the young women.
Original Article: https://neonnettle.com/news/5496-human-remains-found-in-vatican-property-investigation-launched
Read More:The War On God
Watch More:Lucifer’s Temple Chambers Beneath The Vatican
Read More:Pope Tells World-Famous Photographer “I Am The Devil”- Then Laughs It Off