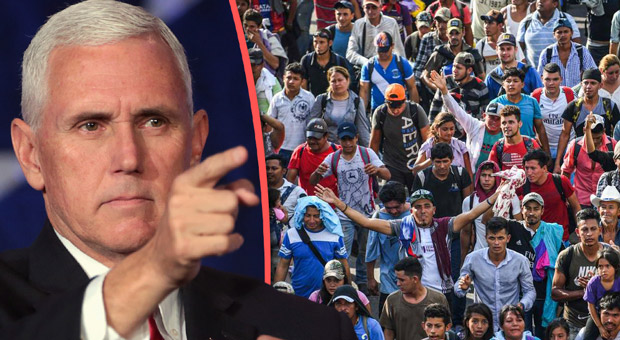 Vice President Mike Pence has spoken out on the caravan of thousands of migrants currently making it’s way to the US Southern Border to say it is being “organized by leftist organizations” and “funded from outside forces.” Speaking during an interview with Fox News about the ticking timebomb of asylum seekers pushing north through Mexico, Pence cited intel that the US has received from abroad, namely from the president of Honduras, that the caravan is being heavily funded to politicize the crisis. As the caravan – consisting mostly of people from Central America – heads for the US through Mexico, President Donald Trump has ordered the deployment of additional troops to help the 2,000 National Guard personnel already present to defend the United States from invasion by preventing the migrants from illegally crossing the border. 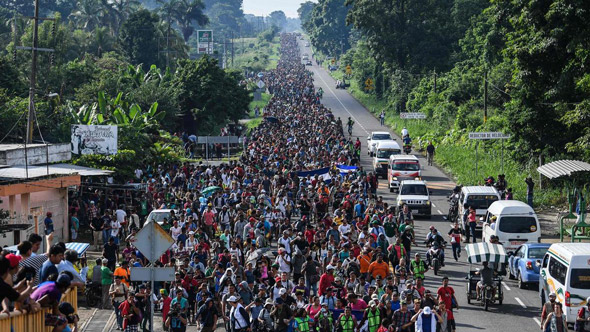 When the caravan arrived at Mexico’s southern border with Guatemala, Mexican forces were overwhelmed and thousands flooded into the country unchecked. VP Pence told Fox News that the US now has evidence that the migrant caravan was actually funded from “outside forces,” and is being organized and helped by “leftist organizations.” “What the president of Honduras told me is that the caravan was organized by leftist organizations, political activists within Honduras, and he said it was being funded by outside groups, and even from Venezuela,” he said.
According to Sputnik, US Homeland Security Secretary Kirstjen Nielsen has announced the completion of the first section of the wall on the US-Mexico border. The 30ft-high and 2 mile-long section of the border wall was officially unveiled amid reports of a massive migrant caravan moving towards the US through Mexico.
AG Confirms In a tweet, Nielsen noted that border security is a matter of national security and expressed hope that Congress would approve bills necessary for boosting the number of border security personnel and coping with the influx of illegal migrants. The Department of Homeland Security earlier reported that a large caravan, consisting mostly of migrants from Central American countries, is moving towards the US through Mexico.
President Trump has vowed to take steps to prevent the migrants from crossing the US border and has slammed Mexican authorities for failing to stop the caravan. Furthermore, Trump alerted border patrol and military personnel by calling the situation a national emergency. He also blasted the Democrats for hampering attempts to reform immigration laws. the thousands of migrants in the caravan are determined to storm the us southern border. The thousands of migrants in the caravan are determined to storm the US Southern Border Later, Secretary of Defense James Mattis approved the deployment of an additional 800 US troops to assist border security in coping with the migrant influx. The US-Mexico border wall is President Donald Trump’s signature project, initially announced during his election campaign in 2016. He initially planned to force Mexico to pay for its construction. However, Mexico’s President Enrique Peña Nieto has repeatedly denied agreeing to such terms.