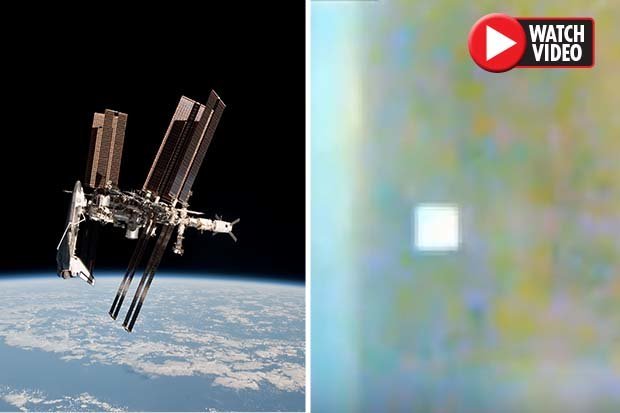 Video footage shows the bizarre anomaly that was spotted during NASA’s live feed from space – which some think could be a UFO or alien spaceship.

The clip reveals the moment the space agency’s second camera appeared to pixellate during the broadcast.

Then, a few seconds later, a white-coloured object can be seen passing in the bottom-left corner.

“I don’t think it is part of the ISS, it definitely seems alien-like to me,” an anonymous source revealed.

“I don’t think its part of the ISS, it definitely seems alien-like to me”

The footage was uploaded to YouTube channel secureteam10, where it has racked up more than 210,000 hits in two days.

“It is blurred on purpose and NASA used software to pixellate the real object,” one viewer revealed.

Another added: “NASA is censoring the truth.”

And a third claimed: “Looks like NASA blocked out the real object.”

BIZARRE: The strange object was spotted near the ISS (Pic: SG/YOUTUBE/SECURETEAM10)
It is not the first time we have seen scenes of this nature.

The space agency came under fire back in October due to a similar incident.

And before that, some conspiracists even claimed aliens could be watching the ISS..