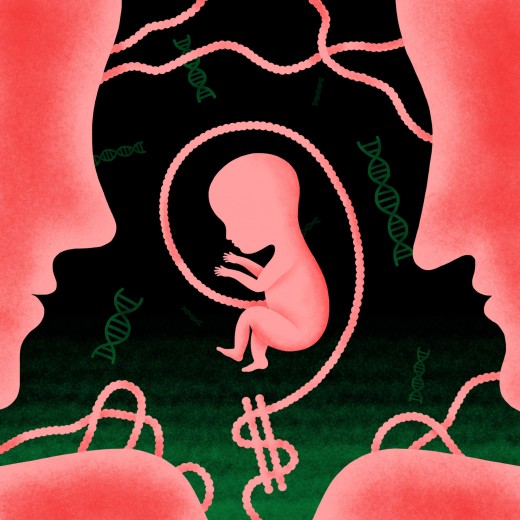 At first, Matthew assumed the weakness in his knee was the sort of orthopedic nuisance that happens when you turn 30. It was weeks before he consulted a doctor, and months before it occurred to him that there could be a connection between his worsening limp and a cousin’s shoulder problem when they were kids. DNA testing confirmed it: Matthew, like his cousin, had a genetic form of dystonia, a condition where muscles contract uncontrollably. Their grandfather most likely had dystonia as well.

I’d met Matthew only a few months earlier, when he’d married my friend’s daughter, Olivia, in one of those hip old New York hotels with an elegant downtown vibe. Since I was the only genetic counselor of their acquaintance, they brought their questions to me. With their permission, I am sharing their story. I have changed their names to preserve their privacy.

Matthew was lucky. His was a mild version of DYT1 dystonia, and injections of Botox in his knee helped. But the genetic mutation can cause severe symptoms: contractures in joints or deformities in the spine. Many patients are put on psychoactive medications, and some require surgery for deep brain stimulation.

Their kids, Matthew and Olivia were told, might not be as lucky. They would have a 50–50 chance of inheriting the gene variant that causes dystonia and, if they did, a 30% chance of developing the disease. The risk of a severely affected child was fairly small, but not insignificant.

My friends learned there was an alternative. They could undergo in vitro fertilization and have their embryos genetically tested while still in a laboratory dish. Using a technology called pre-implantation genetic testing, they could pick the embryos that had not inherited the DYT1 mutation.

It would be expensive—costs for IVF in the US average over $20,000 for each try, and testing can add $10,000 or more. And it would require an unpleasant two-week process of ovarian stimulation and egg harvesting. “It wasn’t the way I saw myself making a baby,” Olivia told me. But they wanted what the procedure could offer them: a guarantee that dystonia was eliminated for the next generation, and beyond.

Matthew and Olivia don’t think of themselves as having a “designer baby.” That term has negative associations, suggesting something trivial, discretionary, or unethical. They weren’t choosing eye color or trying to boost their kid’s SAT score. They were looking out for the health and well-­being of their future child, as parents should.

We risk creating a society where some groups, because of culture or geography or poverty, bear a greater burden of genetic disease.

Public opinion on the use of assisted reproductive technology consistently draws a distinction between preventing disease and picking traits. The Johns Hopkins Genetics and Public Policy Center, which contacted over 6,000 people through surveys and focus groups from 2002 to 2004, summed up its findings this way: “In general, Americans approve of using reproductive genetic tests to prevent fatal childhood disease, but do not approve of using the same tests to identify or select for traits like intelligence or strength.” The dystonia gene is in a gray zone—some people born with it live perfectly healthy lives—yet presumably few parents would criticize Matthew and Olivia’s choice to weed it out.

All embryo testing does fit the “designer” label in one important way, however: it is not available to everybody.

Matthew and Olivia opted in to what is a quiet but significant trend. Although the number of couples using this technology remains small, it is growing rapidly. According to the Society for Assisted Reproductive Technology, the number of US IVF attempts with single-gene testing rose from 1,941 in 2014 to 3,271 in 2016, an increase of almost 70%.

This is only the beginning. As the price of genetic testing of all kinds drops, more adults are learning about their genetic makeup as part of routine medical care and discovering specific genetic risks before pregnancy. But these people are still most likely to be affluent and educated, like Olivia and Matthew. While they consulted with IVF clinics, Olivia’s own brother and his wife got news of a gene that increased risk for cancer in their kids. “If you could get rid of it, why wouldn’t you?” he asked.

Cost was not a concern for these couples, but it is an obstacle for many Americans. The Centers for Disease Control and Prevention (CDC) estimates that 1.7% of babies born in the US today are conceived using IVF. It’s much higher in countries that publicly fund assisted reproductive technology: 4% in Belgium, 5.9% in Denmark. A 2009 study found that 76% of the medical need for assisted reproduction in the US is unmet.

Insurance doesn’t normally cover IVF in the US, except for a handful of states where coverage is mandated. Even policies that cover fertility treatment are inconsistent in what they reimburse. Coverage for pre-implantation genetic testing is downright Kafkaesque. Under many policies, testing the embryos is covered, but the IVF procedure itself is not, because the couples are not infertile.

“The analogy I like to use,” says James Grifo, director of the Division of Reproductive Endocrinology and Infertility at NYU Langone Health, “is if you were having coronary bypass surgery and they didn’t pay for cracking the chest.”

At least part of the reason the IVF industry is growing is not that more people can afford it but that those who can are paying for new kinds of services. Egg banking, for example, is now aggressively marketed to younger women as an insurance policy against age-related infertility. In 2011, egg banking did not even exist as a category in the CDC’s annual report on IVF; by 2016, storing eggs or embryos was the purpose of 25% of all IVF cycles. Elite companies like Facebook offer egg freezing as a perk, but for most people it remains a luxury.

Cost isn’t the only barrier. Reproductive technology is less acceptable in racial, ethnic, and religious groups where being seen as infertile carries a stigma. Language barriers can reduce awareness and referrals. Geography also plays a role, since IVF clinics cluster in areas of greatest demand.

Presumably, many people would make the same decision as Matthew and Olivia if given the option, but many don’t have that choice. Our discomfort around designer babies has always had to do with the fact that it makes the playing field less level—taking existing inequities and turning them into something inborn. If the use of pre-implantation testing grows and we don’t address these disparities, we risk creating a society where some groups, because of culture or geography or poverty, bear a greater burden of genetic disease.

What could change society more profoundly than to take genetic disease—something that has always epitomized our shared humanity—and turn it into something that only happens to some people?

Read More:In A ‘Designer Baby’ Culture- Children Should Not Be Commodities