Popular science fiction of the early 20th century depicted Venus as some kind of wonderland of pleasantly warm temperatures, forests, swamps and even dinosaurs.

In 1950, the Hayden Planetarium at the American Natural History Museum were soliciting reservations for the first space tourism mission, well before the modern era of Blue Origins, SpaceX and Virgin Galactic.

All you had to do was supply your address and tick the box for your preferred destination, which included Venus.

Today, Venus is unlikely to be a dream destination for aspiring space tourists.

As revealed by numerous missions in the last few decades, rather than being a paradise, the planet is a hellish world of infernal temperatures, a corrosive toxic atmosphere and crushing pressures at the surface.

Despite this, NASA is currently working on a conceptual manned mission to Venus, named the High Altitude Venus Operational Concept – (HAVOC).

But how is such a mission even possible? Temperatures on the planet’s surface (about 460°C) are in fact hotter than Mercury, even though Venus is roughly double the distance from the sun.

This is higher than the melting point of many metals including bismuth and lead, which may even fall as ‘snow’ onto the higher mountain peaks.

The surface is a barren rocky landscape consisting of vast plains of basaltic rock dotted with volcanic features, and several continent-scale mountainous regions.

It is also geologically young, having undergone catastrophic resurfacing events.

Such extreme events are caused by the build up of heat below the surface, eventually causing it to melt, release heat and re-solidify.

Certainly a scary prospect for any visitors.

Luckily, the idea behind NASA’s new mission is not to land people on the inhospitable surface, but to use the dense atmosphere as a base for exploration.

No actual date for a HAVOC type mission has been publicly announced yet.

This mission is a long term plan and will rely on small test missions to be successful first.

Between altitudes of 50km and 60km, the pressure and temperature can be compared to regions of the Earth’s lower atmosphere 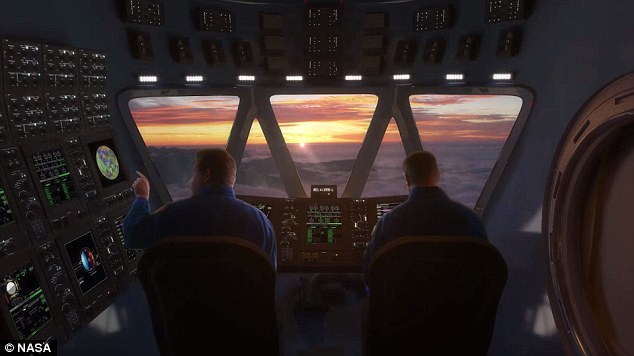 Nearest neighbor: A manned mission could place two astronauts above he Venusian surface for 30-days after a 110-day trip to Earth’s nearest neighbor

Such a mission is actually possible, right now, with current technology. The plan is to use airships which can stay aloft in the upper atmosphere for extended periods of time.

As surprising as it may seem, the upper atmosphere of Venus is the most Earth-like location in the solar system.

Between altitudes of 50km and 60km, the pressure and temperature can be compared to regions of the Earth’s lower atmosphere.

The atmospheric pressure in the Venusian atmosphere at 55km is about half that of the pressure at sea level on Earth.

In fact you would be fine without a pressure suit, as this is roughly equivalent to the air pressure you would encounter at the summit of Mount Kilimanjaro. Nor would you need to insulate yourself as the temperature here ranges between 20°C and 30°C.

The atmosphere above this altitude is also dense enough to protect astronauts from ionising radiation from space. 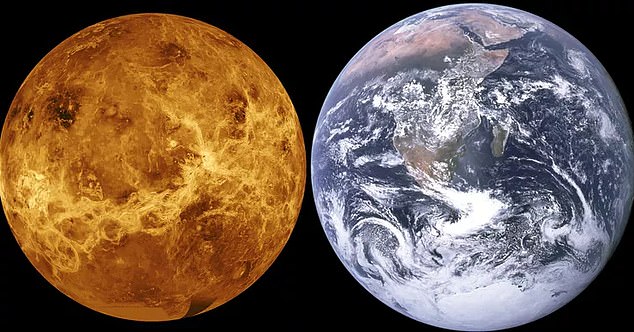 The idea behind NASA’s new mission is not to land people on the inhospitable surface, but to use the dense atmosphere as a base for exploration.

The closer proximity of the sun provides an even greater abundance of available solar radiation than on Earth, which can be used to generate power (approximately 1.4 times greater).

The conceptual airship would float around the planet, being blown by the wind.

It could, usefully, be filled with a breathable gas mixture such as oxygen and nitrogen, providing buoyancy.

THE ATMOSPHERE OF VENUS

The Venusian atmosphere is comprised of 97% carbon dioxide, about 3% nitrogen and trace amounts of other gases.

It famously contains a sprinkling of sulphuric acid which forms dense clouds and is a major contributor to its visible brightness when viewed from Earth.

In fact the planet reflects some 75% of the light that falls onto it from the sun.

This highly reflective cloud layer exists between 45km and 65km, with a haze of sulphuric acid droplets underneath down to about 30km.

As such, an airship design would need to be resistant to the corrosive effect of this acid.

Luckily we already have the technology required to overcome the problem of acidity.

Several commercially available materials, including teflon and a number of plastics, have a high acidic resistance and could be used for the outer envelope of the airship.

Considering all these factors, conceivably you could go for a walk on a platform outside the airship, carrying only your air supply and wearing a chemical hazard suit.

This is possible because breathable air is less dense than the Venusian atmosphere and, as result, would be a lifting gas.

The surface of Venus has been mapped from orbit by radar on the US Magellan mission. However, only a few locations on the surface have ever been visited, by the series of Venera missions of Soviet probes in the late 1970s.

These probes returned the first – and so far only – images of the Venusian surface. Certainly surface conditions seem utterly inhospitable to any kind of life.

The upper atmosphere is a different story however. Certain kinds of extremophile organisms already exist on Earth which could withstand the conditions in the atmosphere at the altitude at which HAVOC would fly.

Species such as Acidianus infernus can be found in highly acidic volcanic lakes in Iceland and Italy. Airborne microbes have also been found to exist in Earth’s clouds. None of this proves that life exists in the Venusian atmosphere, but it is a possibility that could be investigated by a mission like HAVOC.

The current climatic conditions and composition of the atmosphere are the result of a runaway greenhouse effect (an extreme greenhouse effect that cannot be reversed), which transformed the planet from a hospitable Earth-like ‘twin’ world in its early history.

While we do not currently expect Earth to undergo a similarly extreme scenario, it does demonstrate that dramatic changes to a planetary climate can happen when certain physical conditions arise.

By testing our current climate models using the extremes seen on Venus we can more accurately determine how various climate forcing effects can lead to dramatic changes. 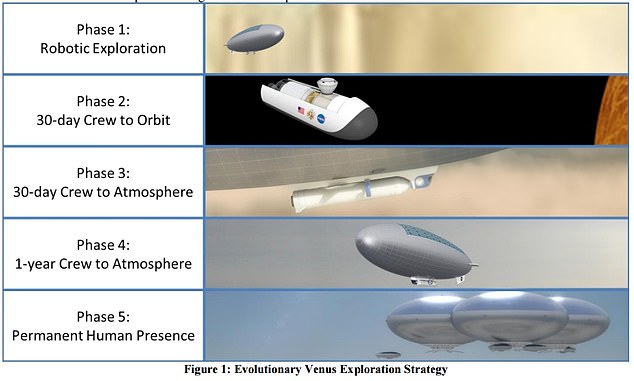 NASA’s idea: A lighter-than-air vehicle could carry either a host of instruments and probes, or a habitat and ascent vehicle for a crew of two astronauts to explore Venus for up to a month. Such a mission would require less time to complete than a crewed Mars mission.

Venus therefore provides us with a means to test the extremes of our current climate modelling, with all the inherent implications for the ecological health of our own planet.

We still know relatively little about Venus, despite it being our nearest planetary neighbour.

Ultimately, learning how two very similar planets can have such different pasts will help us understand the evolution of the solar system and perhaps even that of other star systems.

Read More:What Is Coming? Hawking Says Publically “We Should Spread Out Into Space” To Avoid Earth Disaster