Drills were held across the state and nationwide, as well as in countries including Japan, New Zealand and Canada. Overall, more than 59 million people have registered to take part in the drill.

The annual Great ShakeOut Earthquake Drill was Thursday, encouraging people in the Southland and around the globe to drop, cover and hold to test their level of preparedness for a major temblor.

The 10th annual drill was at 10:18 a.m. At that time, millions of people across California were to “drop” to the ground, take “cover” under a desk, table or other sturdy surface and “hold on” for 60 seconds, as if a major earthquake were occurring.

More than 10 million people in California registered at http://www.shakeout.org to participate in the drill, including nearly 3.3 million in Los Angeles County and 875,000 in Orange County.

Drills were held across the state and nationwide, as well as in countries including Japan, New Zealand and Canada. Overall, more than 59 million people have registered to take part in the drill.

What You’ll Find Along the San Andreas Fault 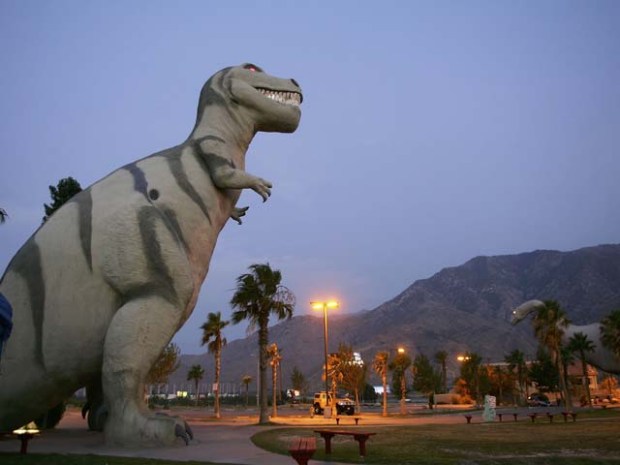 “Everyone, everywhere should know how to protect themselves in an earthquake,” said Mark Benthien, Global ShakeOut coordinator at the Southern California Earthquake Center. “We also encourage everyone to prepare to survive and recover by following the Seven Steps to Earthquake Safety.”

In conjunction with the drill, an earthquake-preparedness fair will be held at Los Angeles City Hall, featuring exhibits, experts and the “Big Shaker” earthquake simulator.

During an actual earthquake, people who are outdoors should find a clear spot away from trees, buildings and power lines, then drop, cover and hold on. People who are driving should pull over to a clear area, stop and stay seated with seatbelt fastened until the shaking stops. When the quake ends, motorists should proceed with caution and avoid bridges or ramps that may have been damaged.

ShakeOut organizers note that many Californians have not experienced a damaging earthquake, such as young people or people who have recently moved to the state. They also warned that while the San Andreas fault could generate a large-scale earthquakes, up to magnitude-8, there are many other active faults in the region that can produce quakes on par with the 1994 Northridge earthquake.

“Numerous earthquake faults crisscross Southern California and no one within the area resides more than 10 miles from an active fault,” according to ShakeOut.org. “In addition to damage caused directly by ground shaking and related ground failure, other hazards such as fires can easily start during and shortly after an earthquake.”

According to the USGS, some 2,000 people would die, tens of thousands would be injured and more than $200 billion in damage would result from a magnitude-7.8 or larger quake, which would have 50 times the intensity of the Jan. 17, 1994, Northridge earthquake. Hundreds of aftershocks would follow, a few of them nearly as big as the original event, according to the USGS.

Photos: What to Keep in Your Disaster Emergency Kit

Californians should be prepared to be self-sufficient for 72 hours following an earthquake or other major disaster, officials say. That includes having a first-aid kit, medications, food and enough water for each member of a household to drink one gallon per day for at least 72 hours, according to local and state officials.

Homeowners and renters should also know how to turn off the gas in their house or apartment in case of leaks.

Read More:Don’t You See? Number Of Earthquakes In The Last 30 Days Is 50% More Than Normal