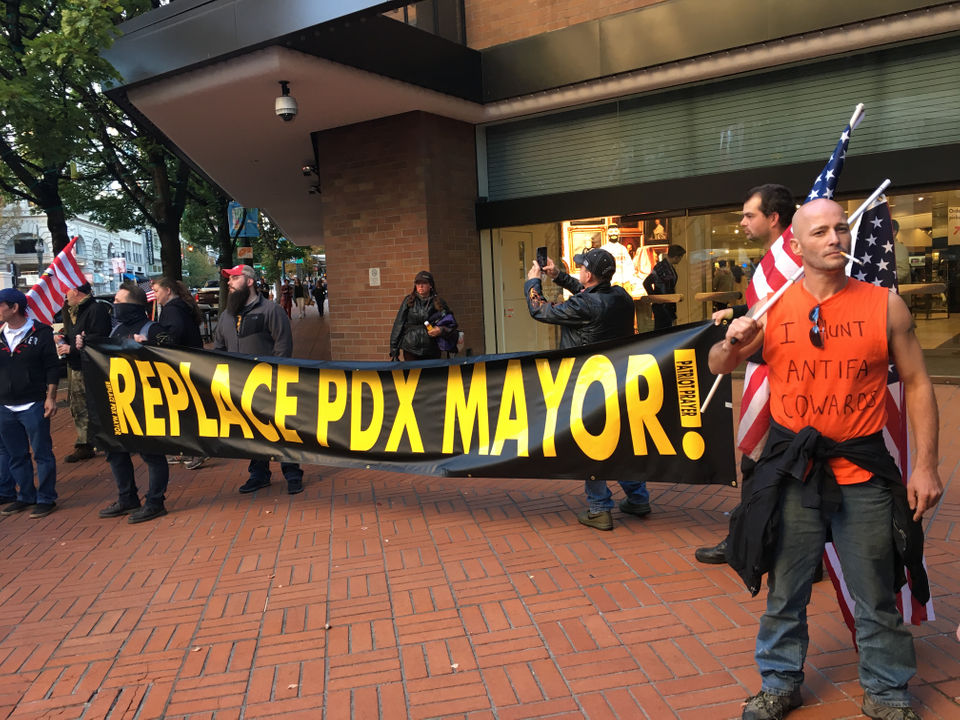 A demonstration billed as a march for “law and order” in the streets of Portland descended into chaos as rival political factions broke into bloody brawls downtown Saturday night.

Members of the right-wing group Patriot Prayer and their black-clad adversaries, known as antifa, used bear spray, bare fists and batons to thrash each other outside Kelly’s Olympian, a popular bar on Southwest Washington Street.

The melee, which lasted more than a minute, ended when riot cops rushed in and fired pepper balls at the street fighters.

The Portland Police Bureau reported seeing protest and counter-protest participants outfitted with hard knuckle gloves, knives and firearms earlier in the evening. Police said they made no arrests Saturday night, but will continue to investigate.

The wild scene unfolded amid mounting tensions among both groups, fueled in part by a pair of national news stories.

A march in Portland against police brutality last week drew headlines after law enforcement’s hands-off approach to the event was blamed for an encounter between protesters and an elderly driver, which outraged many, including Patriot Prayer leader Joey Gibson and his supporters.

On Friday, viral video surfaced showing members of the Proud Boys, a right-wing fraternal organization, beating two or three protesters in New York City after an event at the Republican Party headquarters. 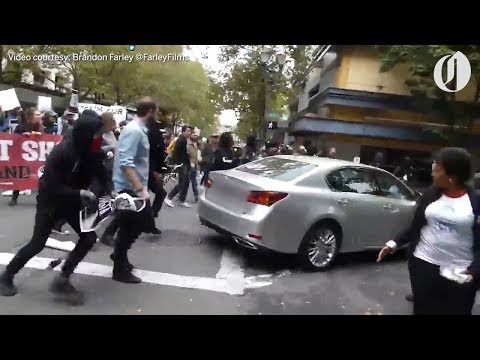 “Admittedly, I might have given them the one-finger salute when I rolled up,” Kent Houser, 74, told The Oregonian/OregonLive.

It was against this backdrop that Gibson, who counts a number of Proud Boys among his ranks, organized the so-called “Flash march for Law and Order in PDX” — ostensibly to protest Portland Mayor Ted Wheeler and his oversight of the city’s police force.

Waving American flags and breaking into patriotic chants, Gibson and several dozen supporters set off to a street memorial for Patrick Kimmons, a 27-year-old black man shot and killed by police, an incident that prompted last week’s march.

As they arrived at the vigil on Southwest Fourth Avenue and Harvey Milk Street, they were met by a large group of counter-demonstrators chanting “Black Lives Matter.”

The two sides exchanged taunts and threats as police stood by and warned against physical confrontation.

About 20 minutes later, the violence erupted a few blocks away among a smaller group of the participants.

Below is a detailed timeline of events from the evening.

UPDATE, 6:04 p.m.: About two dozen marchers on hand as event kicks off.