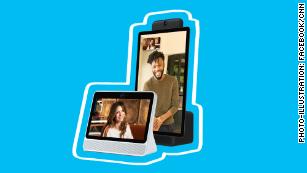 San Francisco (CNN Business)Facebook is releasing its own smart speaker with a screen and a camera. It really hopes you don’t find the Portal creepy.

The Portal, and the larger Portal +, is built specifically for video calls.
It’s essentially a smart speaker with a touchscreen that includes a couple unique features. Among them is a user detection system that will cinematically zoom in on a person’s face or follow them as they move around a room. The idea behind the device is to make video chats more like actually hanging out together.

But will consumers trust Facebook with an always-listening device in their home?
It’s bold move for a company besieged by privacy issues stemming from the Cambridge Analytica data scandal and a massive hack that may have compromised 50 million users.
The company is aware of the concerns. During a demo of the new devices, Facebook’s VP of hardware Rafa Camargo told CNN Business that privacy was built into “every layer.”
On top of each device is a plastic cover that can slide over the camera. It’s an official version of a common DIY security tactic — practiced by Mark Zuckerberg — of putting tape over a laptop’s camera. A mute button cuts power to the microphone and Facebook says the encrypted video streams are not recorded anywhere. Facebook Live, the company’s tool for broadcasting video, is not even an option on a Portal.
Many consumers are already comfortable with the idea of a listening, watching device in their home. And Portals aren’t too different from existing Amazon and Google products.
You can say “Hey Portal, call Seth” to start a video call. But Portal’s voice interface isn’t a full smart assistant. It’s a very limited voice tool just for “device control.”
Facebook is actually outsourcing all voice-assistant work unrelated to video calling.
The Portal uses Amazon’s Alexa voice assistant to handle the usual tasks like playing music and controlling connected devices. A Portal has 4-microphones that are always listening for trigger phrases, and Facebook says it is open to adding support for other assistants in the future.
Portal contains some other Facebook-y touches. The device must be logged into a Facebook Messenger account to make the video calls, which may be confusing for a device shared with multiple people. It can connect with anyone else on Messenger on a phone or tablet, and make group calls to up to six people.
In addition to augmented reality tricks like the ability to put a cat on your head or wear a digital mustache, there’s an option to listen to music from Pandora or Spotify together during a call. An interactive animated story feature is fun for parents or grandparents who are away from their kids.
When it’s not doing video chats, the device can show selected Facebook photos and birthday reminders. Portal does not have full Facebook access, and there’s no browser.
These devices are similar to other smart screens on the market. The smaller of the pair, the $199 Portal with a 10-inch screen, looks extremely similar to the Echo Show and third-party Google Assistant smart screens. The larger $349 device is a 15-inch rotating screen on a bulky mount with a camera on top.
The camera itself doesn’t move, but is high resolution with a 140-degree field of view, and all the panning and zooming is software based. Portal is available for pre-order from Facebook, Amazon and Best Buy, and will ship in November. If you buy any two Portals, you get a $100 discount.
The Portal devices also mark the public debut of “Portal,” the newly rebranded Facebook hardware team. The company launched its hardware group with much fanfare in 2016 and called it “Building 8.”
The team was previously led by former DARPA and Google executive Regina Dugan. It worked on futuristic technology that would let you type words directly from your brain and “hear” through your skin, according to a talk at last year’s F8 developer conference. Dugan resigned from Facebook after 18 months.
Facebook says the Portal devices are just the start for the group, which hopes to release more hardware in the future.
Original Article:https://www.cnn.com/2018/10/08/tech/facebook-portal/
Read More:Amazon’s Fusion With The State Shows Neo-Liberalism’s Drift To Neo-Facism