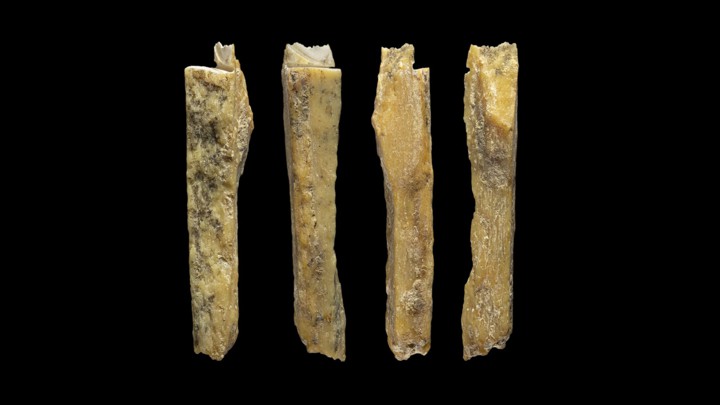 In 2014, two archaeologists, Katerina Douka and Tom Higham, paid a visit to Denisova Cave—a site high up in Siberia’s Altai Mountains that has become something of a magnet for scientists interested in humanity’s past. A decade ago, researchers found a pinky bone in the cave. After analyzing its DNA, they realized it represented a previously unknown group of ancient humans, distinct from either Neanderthals or Homo sapiens. That group became known as the Denisovans.

Three Denisovan teeth have been found in the same place since, along with the toe of a Neanderthal. But such recognizable bones are a rarity. When Douka and Higham visited the cave, they realized that the vast majority of bones recovered from it are tiny, unidentifiable slivers. It’s impossible to tell which body part they came from, let alone which species. Roughly 5 percent of them can be narrowed down to a specific class of animals—a mammal, perhaps, but nothing more precise. “They’re dug up, washed, and put in a bag, never to be seen again,” Douka says.

If analyzed, the DNA within these fragments could easily reveal the identity of their owner. But the fragments are manifold, and sequencing DNA is still laborious and expensive. It would be too costly to inspect every single sliver. So instead, Douka and Higham turned to a new technique that’s much faster and cheaper.

It’s called ZooMS. Using a drill, scientists extract a tiny chip from each bone. They treat it with chemicals that pull out a highly abundant protein called collagen. They use an enzyme that cuts the collagen into pieces, and weigh those pieces with an instrument called a mass spectrometer. They then compare those measurements against a reference database of collagens from various animals.Unlike DNA sequencing, ZooMS isn’t precise enough to identify particular species. It can tell if a bone belonged to a marine mammal, or a sheep, or a great ape—and sometimes that level of coarse detail is enough. If a piece of bone from Denisova Cave comes back as “great ape,” it must have come from a human or another hominin, given that no other great apes have lived in Siberia. Best of all, “the method costs a fraction of DNA sequencing, and is very fast,” Douka says. “We can do several hundred bones a week.”

Douka’s master’s student Samantha Brown did this in 2015, starting with what she describes as “a massive one-liter bag of fragmented bones.” Working with Mike Buckley from the University of Manchester, Brown drilled 700 of these fragments, and was initially disappointed to find exactly zero hominins. Undeterred, she went back to Russia, got another bag, and drilled hundreds more. And with bone 1,227, she got a hit.

A hominin. But which one?

Brown sent the bone sliver to the Max Planck Institute for Evolutionary Anthropology in Leipzig, where Viviane Slon sequenced its DNA. Based on its mitochondrial DNA, which sits apart from the main genome and is passed down from only mothers, Slon concluded that the bone came from a Neanderthal.

That wasn’t the full story. When Slon analyzed the rest of the genome, she realized that it contained Neanderthal and Denisovan DNA in equal measure. The bone belonged to a hybrid between both hominins—a teenage girl, born to a Neanderthal mother and a Denisovan father.

The team announced its discovery in August, and it was one of the most startling of the year. Many living people carry Neanderthal and Denisovan genes, so it’s clear that these groups also bred with our ancestors. Since they clearly lived together in Denisova Cave, it’s likely they also had sex with one another. But as my colleague Sarah Zhang reported, no one expected to actually find the first-generation descendant of one such coupling. And yet, there she was, her astonishing ancestry revealed through that tiny sliver of bone. Brown nicknamed her Denny. “I felt like [the name] DC 1227 was a little cold,” she says. “It felt like a new friend that we found.”

To find such a singular individual on the first positive hit was exhilarating for the team. It has now analyzed around 5,500 bones and found four more hominins. Douka tweeted about the most recent one—another inch-long fragment—last month. “Who can it be?” she wrote. “Maybe Denny’s little bro?! We’ll know soon when [ancient DNA, radiocarbon, and] further analyses are finalized.”

The team has taken its work further afield, too. Last year, it announced the discovery of a new Neanderthal bone from Vindija Cave in Croatia: “It had been misidentified, and was sitting among some bear bones,” Douka says. With five years of funding from the European Research Council, the team plans on searching for hominin bones at other Asian sites.

The big ambition for this project, known as Finder, is to find the remains of more Denisovans. Their DNA lives on in people from Asia and Melanesia, and one of their genes allows today’s Tibetans to survive at high altitudes. This legacy suggests that they were once widespread, but as far as anyone knows, their remains have never been found except in Denisova. We have their complete genome and we can even pull their DNA out of cave dirt. But you could still hold every known Denisovan bone in the palm of one hand.

If the Finder team can locate more bones in other parts of Asia, they would tell the team about how dispersed these hominins were. The DNA inside those bones could also reveal how different Denisovan populations were related to one another, and even how large those groups were. It’s a long shot, perhaps, but so was Denny. If the history of Denisovans tells us anything so far, it’s that even the tiniest of bones, in the unlikeliest of places, can reshape our understanding of humanity’s past.