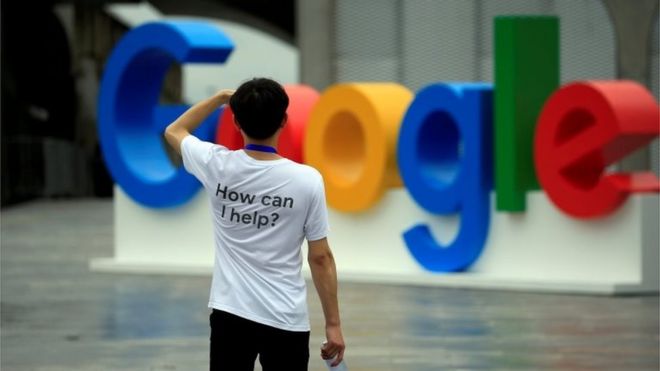 A former Google employee has warned of the firm’s “disturbing” plans in China, in a letter to US lawmakers.

Jack Poulson, who had been a senior researcher at the company until resigning in August, wrote that he was fearful of Google’s ambitions.

His letter alleges Google’s work on a Chinese product – codenamed Dragonfly – would aid Beijing’s efforts to censor and monitor its citizens online.

Google has said its work in China to date has been “exploratory”.

Ben Gomes, Google’s head of search, told the BBC earlier this week: “Right now all we’ve done is some exploration, but since we don’t have any plans to launch something there’s nothing much I can say about it.”

A report by news site The Intercept last week alleged Google had demanded employees delete an internal memo that discussed the plans.

Google has not commented on the staff row, but said: “We’ve been investing for many years to help Chinese users, from developing Android, through mobile apps such as Google Translate and Files Go, and our developer tools.”

It added: “We are not close to launching a search product in China.”

Mr Poulson’s letter details several aspects of Google’s work that had been reported in the press but never officially confirmed by the company. It was submitted to the Senate Commerce Committee, which held a hearing on Wednesday in Washington DC.

The topic of the hearing was “examining safeguards for consumer data privacy”.

Mr Enright confirmed to the Republican lawmaker that Project Dragonfly existed but added that a product was not close to launch.

Representatives from AT&T, Apple, Twitter and Amazon also took part in the hearing, most of which centred on whether there was a need for a new federal data privacy law.

The letter alleges Google is working on:

Mr Poulson said the sum of these efforts amounted to a “catastrophic failure” of Google’s internal policies on privacy – as well as going against assurances made to the US trade regulator regarding data protection measures in its products.

“Dragonfly is part of a broad pattern of unaccountable decision making across the tech industry,” Mr Poulson wrote.