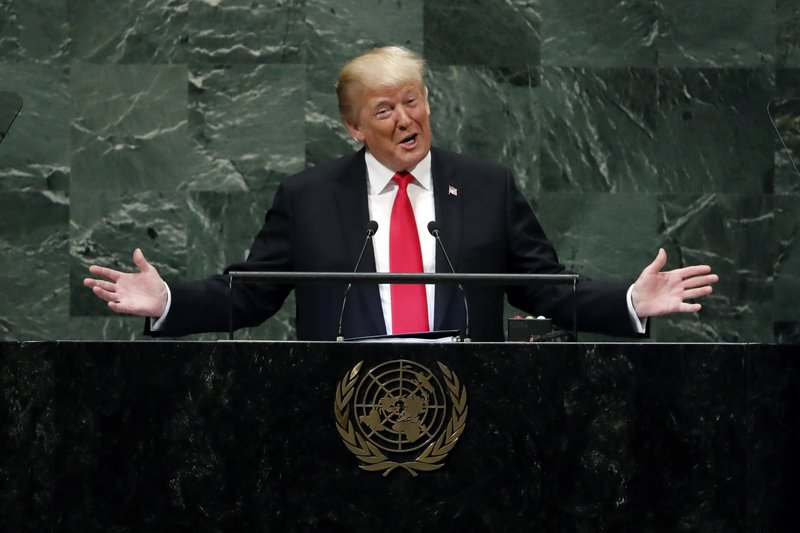 UNITED NATIONS (AP) — President Donald Trump poured scorn on the “ideology of globalism” and heaped praise on his own administration’s achievements Tuesday in a speech to the U.N. General Assembly that drew headshakes and even mocking laughter from his audience of fellow world leaders.

“The U.S. will not tell you how to live and work or worship,” Trump said as he unapologetically promoted his “America First” agenda. “We only ask that you honor our sovereignty in return.”

Speaking in triumphal terms, Trump approached his address to the world body as something of an annual report to the world on his country’s progress since his inauguration. He showcased strong economic numbers, declared that the U.S. military is “more powerful than it has ever been before” and crowed that in “less than two years, my administration has accomplished more than almost any administration in the history of our country.”

Just sentences into the president’s remarks, the audience began to chuckle and some leaders broke into outright laughter, suggesting the one-time reality television star’s puffery is as familiar abroad as it is at home. Trump appeared briefly flustered, then smiled and said it was not the reaction he expected “but that’s all right.” 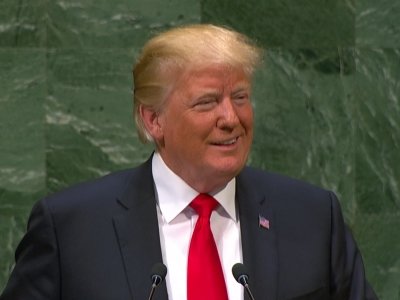 President Donald Trump received an unexpected laugh at the United Nations General Assembly on Tuesday when he opened a speech by bragging about his administration’s domestic achievements. (Sept. 25)

Later he brushed off the episode, telling reporters, “Oh it was great. Well, that was meant to get some laughter so it was great.”

The leaders’ spontaneous response to Trump’s address only reinforced the American president’s isolation among allies and foes alike, as his nationalistic policies have created rifts with erstwhile partners and cast doubt in some circles about the reliability of American commitments around the world.

Barely an hour before he spoke, in fact, U.N. Secretary-General Antonio Guterres declared to the assembly that global cooperation is the world’s best hope and “multilateralism is under fire precisely when we need it most.”

Since taking office, Trump has removed the U.S. from the Paris climate accord, promoted protectionist tariffs and questioned the value of the North Atlantic Treaty Organization and other alliances in furtherance of what he termed on Tuesday a strategy of “principled realism.”

To that end, Trump flaunted his embrace of negotiations with North Korea’s Kim Jong Un just a year after he had warned of raining down “total destruction” on a leader he branded “Little Rocket Man.” As Trump praised Kim’s “courage” on Tuesday, he unloaded harsh rhetoric on nuclear-aspirant Iran as a persistent malign influence across the Middle East.

“We ask all nations to isolate Iran’s regime as long as its aggression continues,” said Trump. The president has removed the U.S. from the 2015 nuclear accord with Iran, citing the country’s destabilizing actions throughout the region and support for terrorist groups like Hezbollah, and he accused its leaders on Tuesday of sowing “chaos, death and destruction.”

His national security adviser, John Bolton, was to go even further in a speech Tuesday, issuing a dire warning to Iran: “If you cross us, our allies or our partners; if you harm our citizens; if you continue to lie, cheat and deceive, yes, there will indeed be hell to pay,” Bolton said, according to prepared remarks released by the White House.

In addition to his keynote speech, Trump is to chair a meeting of the U.N. Security Council about nuclear proliferation on Wednesday. His four days of choreographed foreign affairs were designed to stand in contrast to a presidency sometimes defined by disorder, but they were quickly overshadowed by domestic political crises. 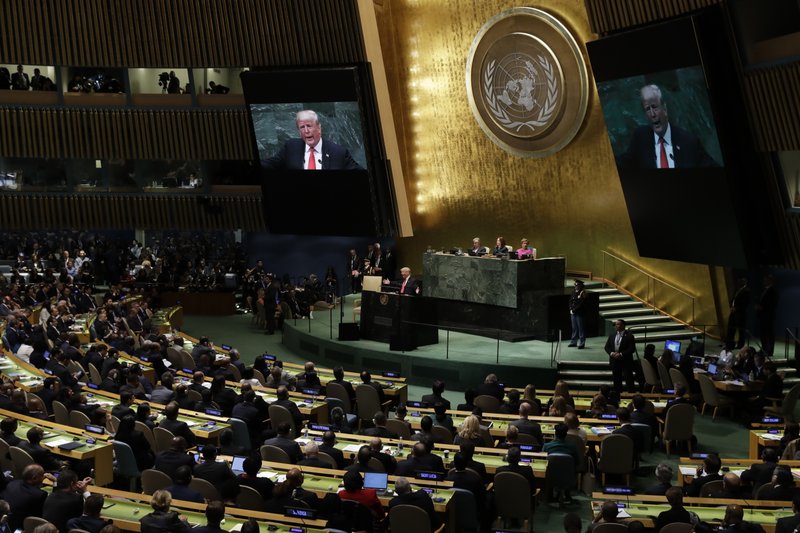 The fate of his second Supreme Court nominee, Brett Kavanaugh, was in fresh doubt after a second allegation of sexual misconduct, which Kavanaugh denies. Kavanaugh and his first accuser testify to Congress on Thursday.

Drama also swirls around the job security of Trump’s deputy attorney general. Rod Rosenstein was reported last week to have floated the idea of secretly recording the president last year and to have raised the idea of using the 25th Amendment to remove him from office. He will meet with Trump at the White House, also on Thursday.

“We reject the ideology of globalism and we embrace the doctrine of patriotism,” Trump said.

He referenced a list of U.N. bodies, from the International Criminal Court to the Human Rights Council, that his administration is working to undermine.

“America will always choose independence and cooperation over global governance, control and domination,” Trump declared. His denunciations of globalism drew murmurs from other members of the organization that stands as the very embodiment of the notion.

Shortly before he spoke, in fact, U.N. Secretary-General Guterres had defended international cooperation as the only way to tackle the challenges and threats of increasingly chaotic times.

“Democratic principles are under siege,” Guterres said. “The world is more connected, yet societies are becoming more fragmented. Challenges are growing outward, while many people are turning inward.”

On other tense subjects, Trump’s criticism of Germany’s pursuit of a direct energy pipeline from Russia drew a dismissive headshake from a member of the U.S. ally’s delegation, and his mention of the United Arab Emirates, Saudi Arabia and Qatar all in one breath was received with stone-faced expressions by Saudi officials. The UAE and Saudi Arabia have been boycotting Doha since last year as part of a dispute tearing apart the typically clubby Gulf Arab nations.

The laughter in the first moments of Trump’s address evoked a campaign line Trump frequently deployed against his predecessor Barack Obama — who embraced international engagement — suggesting that due to weak American leadership, “the world is laughing at us.”

In 2014, Trump tweeted “We need a President who isn’t a laughingstock to the entire World. We need a truly great leader, a genius at strategy and winning. Respect!”

Appearances on the global stage tend to elevate the stature of presidents both abroad and at home. But even before his arrival for the annual gathering of world leaders and diplomats, the desired image was being eclipsed as Trump was forced to confront the salacious and embarrassing in the controversies over Rosenstein and Kavanaugh.

With cable news chyrons flashing breathless updates about both Beltway dramas, news of Trump’s foreign policy moves from the U.N., led by a new trade deal with South Korea, struggled to break through.