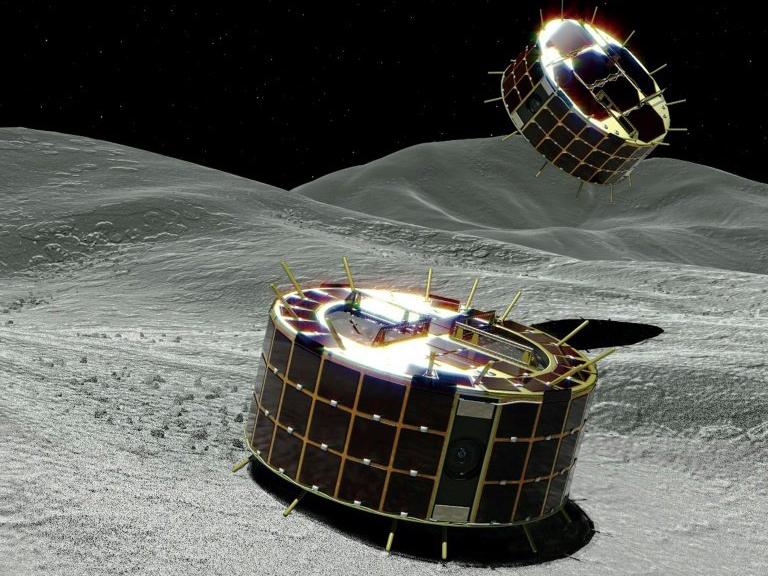 Two tiny robots have landed safely on an asteroid after a Japanese spacecraft dropped them there on Friday.

The scientists behind the historic mission expressed their delight as the rovers sent back the first images from the surface of the space rock Ryugu.

Dubbed MINERVA-II1, the robotic explorers are the first of their kind to be successfully landed on an asteroid.

The Japanese space agency JAXA announced that both units were operational after a period of silence between the unmanned spacecraft Hayabusa-2 depositing them and connection being established with the team on Earth.

“I cannot find words to express how happy I am that we were able to realise mobile exploration on the surface of an asteroid,” said Hayabusa-2 project manager Dr Yuichi Tsuda.

“I am proud that Hayabusa2 was able to contribute to the creation of this technology for a new method of space exploration by surface movement on small bodies.”

The rovers will use the low gravity conditions on Ryugu to hop across the asteroid’s surface, measuring temperatures and sending images back to Earth via Hayabusa-2.

“I was so moved to see these small rovers successfully explore an asteroid surface because we could not achieve this at the time of Hayabusa, 13 years ago,” said project mission manager Dr Makoto Yoshikawa.

“I was particularly impressed with the images taken from close range on the asteroid surface.”

Among the first pictures that came back were some showing the rocky surroundings the MINERVA-II1 robots have found themselves in, and one showing Hayabusa-2 flying in the sky above.

The team noted that as some of the images had been taken mid-hop they had emerged a little blurred.

“Although I was disappointed with the blurred image that first came from the rover, it was good to be able to capture this shot as it was recorded by the rover as the Hayabusa2 spacecraft is shown,” said Tetsuo Yoshimitsu, who led the MINERVA-II1 programme.

“Moreover, with the image taken during the hop on the asteroid surface, I was able to confirm the effectiveness of this movement mechanism on the small celestial body and see the result of many years of research.

The small rovers are the first component of Hayabusa-2’s mission to Ryugu. Next month the spacecraft will deploy an explosive device to blast a hole in the asteroid, allowing rock samples to be taken from its depths.

Following that it will release a French-German landing vehicle known as the Mobile Asteroid Surface Scout (MASCOT) to explore the surface in greater detail.