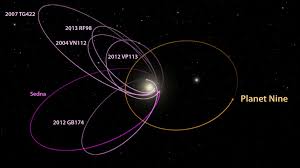 For the real story of Nibiru (Planet X) First we go once again back to the creation story of Mesopotamia The SUMERIANS always described their Gods as planets starting with Pluto, then Neptune, Uranus, etc., as if they were seeing the planets from a heavenly body (or spacecraft ?) that was entering our solar system from the outside. The Sumerian seal (below), with the planets Mercury, Venus, Earth, Moon, Mars, Unknown (about size of Uranus/Neptune), Jupiter, Saturn, Indeterminate (about size of Mercury), Uranus, Neptune, Pluto. The SUMERIANS also mentioned a “twelfth” planet called “NIBIRU”, one whose elliptical orbit brought it close to Earth for a brief period about every 3,600 years.

The Sumerians and later also the Babylonians mention about a long time ago in Ancient times in which Nibiru (Marduk), until that time a stranger in our solar system, had a fight in heaven with Tiamat and Kingu. At that time, millions of years ago, the satellites of Nibiru (Marduk) collapsed with Tiamat (a planet at least two times the mass of Earth) and broke it in 2 parts. In accordance to the theory of Zecharia Sitchin and others, the 2 parts of Tiamat were forced to another orbit around the Sun, One part was broken in small parts and are now called The Asteroid Belt (between Mars and Jupiter) and Asteroids Meteorites and Comets.

The other part was forced into his new orbit between Venus and Mars and became the Earth. Kingu became the Moon of the “new planet” Earth. Nibiru was forced into an elliptical orbit around the Sun and its new orbit was from that time on a cycle of 3,600 years around the Sun. Before I unfold my theory about the timeline of the above events and what happened afterwards I like to honor first the writer of “The Earth Chronicles” Zecharia Sitchin for his great in depth study of the Sumerian and Babylonian history and his theory of which most I agree.

Read More:Dunn Solar Observatory Isn’t The Only One ‘OFFLINE’- What Are They Trying To Hide?

Watch More:NAILED IT ! Ted Talks Speaker Talks Electromagnetism And The Affects Of Nibiru In PLAIN ENGLISH