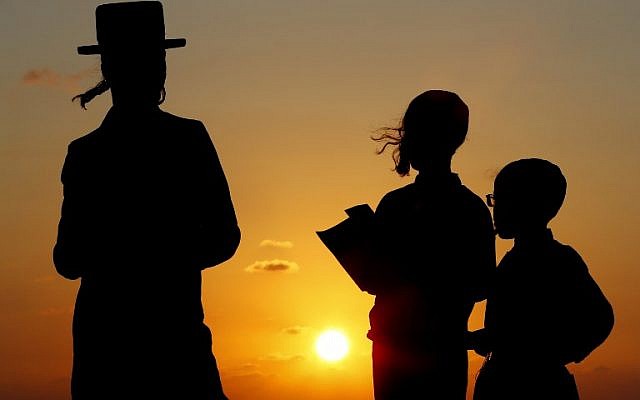 Israel shut down on Tuesday evening for Yom Kippur, the Jewish Day of Atonement and the holiest day of the Jewish calendar.

All flights in and out of Ben Gurion airport ceased at 1:35 p.m.. The airport will reopen Wednesday night with arrivals starting at 9:30 p.m., while departures will resume at 11:30 p.m. Public transport also gradually halted with buses and trains stopping their routes until after the fast day.

Times of Israel coverage will resume when the fast day is over on Wednesday night. 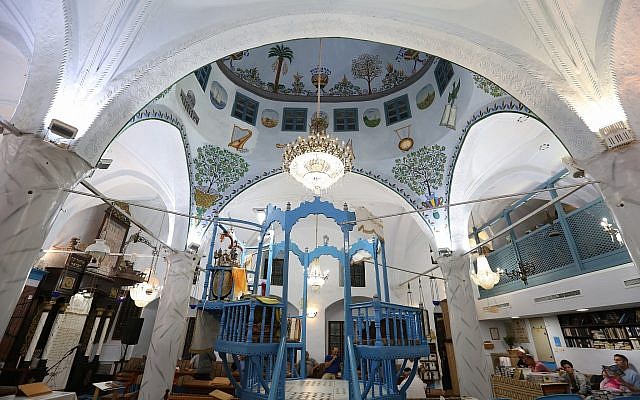 Ultra-Orthodox Jewish men pray for forgiveness (Selichot) at the Abuav Synagogue in the northern Israeli city of Tzfat, ahead of Yom Kippur, on September 17, 2018. (David Cohen/Flash90)

Yom Kippur, which began at Tuesday at sundown and ends Wednesday night, is marked with a 25-hour fast and intense prayer by religious Jews, while more secular Israelis often use the day to ride bicycles on the country’s deserted highways. 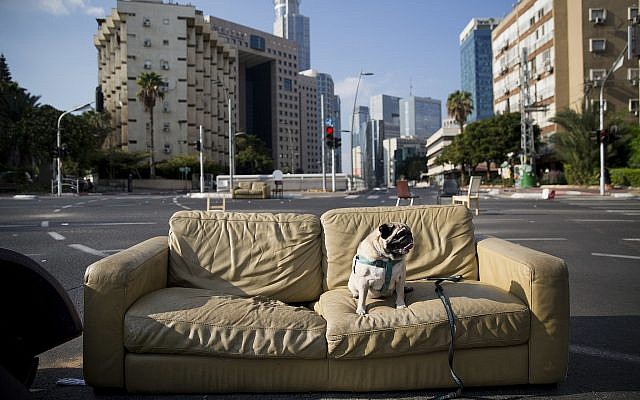 A dog sits on a sofa that has been placed on a car-free street during the Jewish holiday of Yom Kippur in Ramat Gan, Israel, Saturday, Sept. 30, 2017. Israelis are marking Yom Kippur, or ‘Day of Atonement,’ which is the holiest of Jewish holidays when observant Jews atone for the sins of the past year and the Israeli nation comes to almost a complete standstill. (AP Photo/Oded Balilty)

Security and rescue services, however, remain on high alert.

For the Magen David Adom Rescue service, Yom Kippur is one of the busiest days of the year with hundreds of extra medics, paramedics, ambulances and volunteers deployed across the country.

Most injuries over Yom Kippur come from accidents on the roads as tens of thousands of children and teens take advantage of the deserted streets to ride their bicycles. Other common Yom Kippur injuries are caused by parents leaving children unattended outside synagogues and, of course, dehydration and complications from fasting.

Hospitals were working with limited emergency medical crews only. 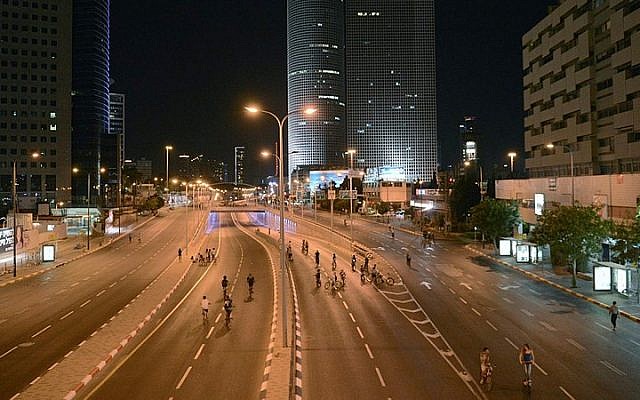 Israelis ride their bicycles on empty roads in Tel Aviv, on Yom Kippur, the holiest of Jewish holidays. The photo was taken on October 3, 2014. (Danielle Shitrit/Flash 90)

Weather was forecast to be warm and sunny Wednesday with a high of 28°C (82°F) forecast for Jerusalem and Tel Aviv, increasing that chances for dehydration for people fasting. 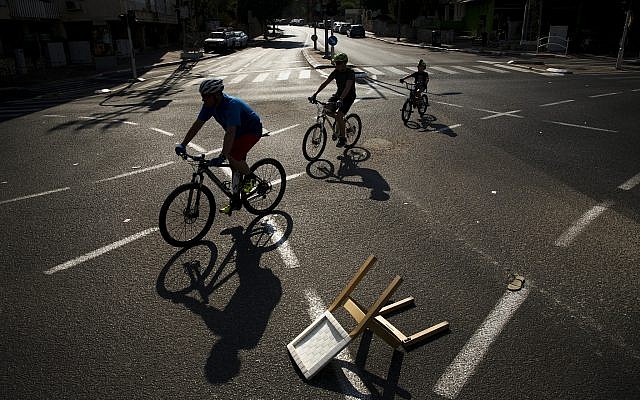 Meanwhile, the IDF sealed off the West Bank for 48 hours starting at 12:01 a.m. Tuesday.

The Erez border crossing into Gaza has also been shuttered amid rising border tensions with the Palestinian enclave.

The army routinely seals off the West Bank and Gaza on Jewish holidays, and did so last week for Rosh Hashanah, the Jewish New Year.

Police spokesman Mickey Rosenfeld said additional police units were deployed to the Old City for the holiday, which falls a day ahead of the Shiite Muslim holy day of Ashura.

Police arrested five Muslim activists on the Temple Mount on Tuesday and accused them of trying to obstruct a group of Jewish visitors touring the flashpoint Jerusalem holy site. 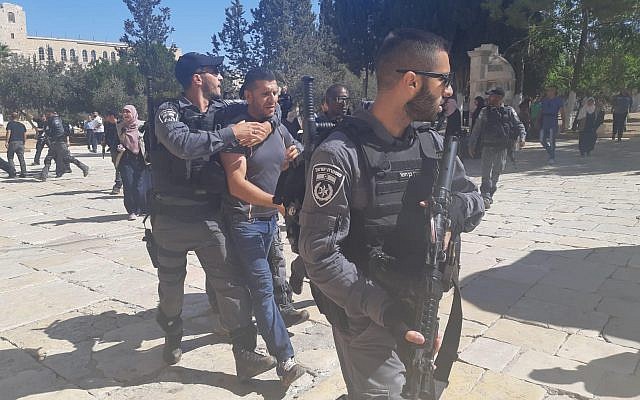 Police arresting a man on the Temple Mount in Jerusalem on September 18, 2018. (courtesy)

According to the police and video from the scene, the five suspects belong to the Al-Aqsa Youth organization and had blocked a group of Jewish religious visitors.

“Police asked them several times not to disturb the public order and not to interfere with the proper functioning of the visits, but they did not respond,” a police spokesperson said in a statement.

Video from the incident released by the left-wing Ir Amim organization showed police scuffling with a group of Muslims on the compound, which houses the Dome of the Rock and the Al-Aqsa Mosque and is known as the Haram al-Sharif in Arabic.

According to Ir Amim, police had tried to move two people who work for the Waqf Islamic endowment, which administers the site, from a path where the Jewish visitors had been walking.

A Waqf spokesperson said four people were injured in the fighting.

According to the prevailing status quo at the site, Jews are allowed to visit but not pray there. Visits by religious Jews are closely guarded by a police escort and Waqf representatives generally also follow the groups closely.

Read More:The Blast Of The Shofar In Israel Marks The Most Prophetic Month In Bible History