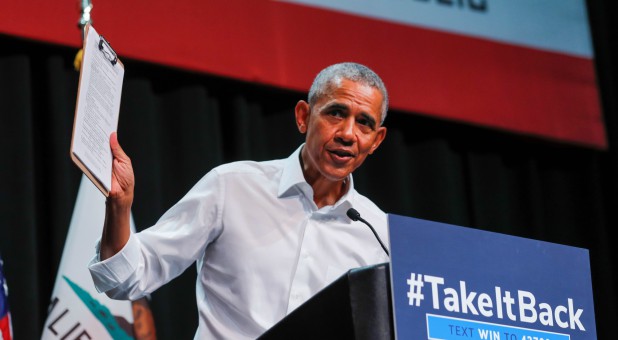 Listening to Barack Obama’s message as he hits the campaign trail railing against President Donald Trump, Republicans and conservatism, millions of value voters in America wish the former president would likewise decline to go public with his message.

I prayed daily for over eight years for President Obama and encouraged multitudes to do the same, but we can’t remain silent with his current conduct. And be aware that his wife, Michelle, is teaming up with liberal Democrat Tom Hanks and other celebrities doing the same in multiple cities advancing the “progressive” agenda as the critical midterm elections approach.

Since America’s founding, presidents have been sensitive not to directly criticize their successor. There is a clear-cut code of presidents (standard operating procedure) to not bash other presidents once they leave office. To his credit, former President George W. Bush was exemplary in honoring this protocol, as have been all the other living ex-presidents, George H.W. Bush, Jimmy Carter and Bill Clinton.

Because Obama threw this sacred tradition overboard in his campaigning, Vice President Mike Pence gently but forthrightly criticized the former commander-in-chief for delivering scathing criticism of President Trump and his administration.

“It was very disappointing to see President Obama break with the tradition of former presidents and become so political and roll out the same tired arguments that he and liberals have made over the last eight years,” Pence said.

As to be expected, Trump-hating USA Today (9/12/18) likened his coming out speech to the euphoria of Beatlemania.

Fox News commentator Judge Jeanine exclaimed, “It has never happened in the history of this country, an ex-president viciously attacking his successor, trashing our commander-in-chief, his party and all those Americans who put him in the Oval Office.”

And former New Hampshire Governor John Sununu was even more blunt, “What is the (expletive) fool doing coming out of retirement to break the tradition of not attacking sitting presidents?”

Millions of patriotic and principled Americans believe in rules of dignity, propriety, decorum and statesmanship.

Obama, raised on the Rules for Radicals of Saul Alinsky (playbook dedicated to Lucifer), disregards these principles, along with following Alinsky’s tactic of deception to achieve one’s objective. Like it or not, we are engaged in a deepening cultural war for the soul of our nation with the former president, the Left, a radicalized Democratic Party, #NeverTrumpers and an overwhelmingly corrupt press. These are the brutal realities of our day.

For those who say, “What about President Trump and his in-your-face, antagonistic Tweets?”

I remind them that during wartime, a leader’s conduct can sometimes be undignified and rash as patriots make allowances not normally deemed acceptable in peaceful times. Scores prayed for a miracle to save us from rabid pro-abortionist and Democratic socialist Hillary Clinton. Multitudes believe God gave us a “wrecking ball,” “drain the swamp,” “take no prisoners” president for this urgent time of social upheaval and ever-intensifying cultural war.

Remember Abraham Lincoln’s handling of the heavy drinking General Ulysses Grant (“I cannot spare this man. He fights!”)? Or how about FDR excusing the “shoot from the hip” vulgar talk of General George Patton as his battlefield tactics were obliterating Rommel’s tanks in World War II?

With the critical midterm election just two months away, Obama went on the campaign trail, blaming Trump and the GOP for dividing the nation while declaring his tenure brought unity and prosperity to our land. He referred to himself over 100 times in a 64-minute speech.

Do you remember when President Obama stated his “unifying” words about conservatives not supporting his “fundamental transformation of America?” “They get bitter; they cling to their guns or religion or antipathy towards people who aren’t like them …”

Or how about how he “brought us together” with repeated disparaging remarks about conservatives in areas like the following:

I applaud the recent comments by Florida Senator Marco Rubio who exposed this revision of history by Obama as he hit the campaign trail distorting reality, misleading masses and attempting to continue pushing policies that brought such devastation to America.

In his speech Mr. Obama also stirred emotions by declaring “I want to see a restoration of honesty and lawfulness in our government!” This is another “jaw-dropper” when the truth is he repeatedly refused to enforce federal laws on immigration, drugs and over 76 areas where he let lawlessness prevail.

Communist revolutionary Vladimir Lenin said, “If you can separate people from their history, they are easily persuaded.”

No matter what picture Obama tries to paint as he crisscrosses the land again promoting socialism, globalism and secularism, we must be bold in upholding the truth.

As America’s economy is booming and this current administration promotes policies, principles and political appointments aligning with our nation’s Constitution and Judeo-Christian heritage, it’s imperative that we refresh our memories with the damage Obama did during his time in office so we’re not hoodwinked again.

My conviction is that he was irrefutably America’s worst president. If you have doubts, may I call your attention to a commentary I wrote that is one of the most posted and shared of my journalistic career. Simply go to “10 Reasons Why Barack Obama Was America’s Worst President.” Decide for yourself.

This is not about bashing a former president but rather bringing forth truth and rejecting any bologna regarding America, our past and what can be a wonderful future as restoration occurs.

Here’s the deal: America’s greatest need is a spiritual awakening coming from prayer and national repentance. This is not a time for complacency but rather consistency from parents and pastors equipping children and churches to discern truth on the 30 critical issues of today. Senior leaders nationwide strongly encourage using the free and immediately accessible Bullseye Challenge resource, as the midterm election is less than two months away.

Pastors, please exhort your people to prioritize voting in November, and you lead the way. Two years of righteous “gains” can be reversed almost overnight so we can’t drop the ball at this critical time!