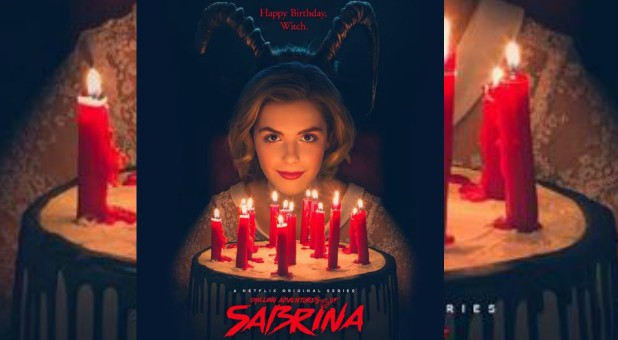 Netflix debuted its trailer for Chilling Adventures of Sabrina on Thursday, teasing viewers with glimpses at Baphomet, demonic rituals, pentagrams, spells and more.

“We are living in a golden age of Satanic coming-of-age tales,” Katie Rife of the AV Club writes.

The poster for the series, released Wednesday, gives the titular character horns as the Satanic icon Baphomet hovers behind her.

Netflix says Chilling Adventures of Sabrina imagines the origin and adventures of Sabrina the Teenage Witch as a dark coming-of-age story that traffics in horror, the occult and, of course, witchcraft. Tonally in the vein of Rosemary’s Baby and The Exorcist, this adaptation finds Sabrina wrestling to reconcile her dual nature—half-witch, half-mortal—while standing against the evil forces that threaten her, her family and the daylight world humans inhabit.

“The Chilling Adventures of Sabrina trailer certainly looks like the creepy, supernatural drama those close to the production have promised fans,” ScreenRant reports. “Much of the trailer is made up of quick-cut scenes, showcasing various settings around town, including the Spellman Mortuary and Cerberus Books. Further, the trailer teases the 16th birthday of Sabrina, which marks an important time in a young witch’s life. But the celebrations aren’t all fun and games, with multiple shots of various rituals and the demon that appears behind Sabrina in the show’s poster.”

While some Christians quibbled with the first series, which was more hokey that horror, the new adaptation proves there is nothing to joke about with witchcraft.

In The Chilling Adventures of Sabrina, Salem is a nondescript black cat without the ability to speak. But Salem’s not actually a cat at all. He’s Sabrina’s familiar—a goblin trapped in the body of a cat, dedicated to protecting and helping Sabrina.

The new Zelda Spellman is a nascent fashion icon, a Satan-worshipping queen, and absolutely terrifying—in the best way possible. Otto is an Australian actor best known for her stint as Eowyn in The Lord of the Rings movies.

At high school, Sabrina has to contend with Mary Wardell. And in the witch world, she has to deal with Father Blackwood, a dogmatic and vindictive high priest.

Sabrina lives with Zelda, Hilda and Ambrose, her charming, rule-breaking pansexual cousin on perpetual house arrest. This is Perdomo’s first onscreen role, but after Sabrina, you know it won’t be his last.

Blatant satanism on television could be a reflection on the culture’s larger recent obsession with the occult.

Even secular sources have reported on culture’s growing obsession with darkness.

Donald Trump and his cabinet of evangelical, right-wing billionaires have been enacting their anti-woman agenda on both a national and international stage for nearly two years, reinstituting the global gag rule on abortion, continuing their attacks on Planned Parenthood and demonstrating on every front their contempt for women and children. …

In just a few short years, under these conditions, the pop culture witch has grown far more hostile. She’s no longer here to cleanse auras and bow to the moon. As writer Lindy West joked in her New York Times op-ed, “Yes, this is a witch hunt. I’m a witch and I’m hunting you.”

This Big Mood is already felt in Charmed, a show you’d expect to be goofy, nostalgic fun. We see witch Mel Vera get accused of being too angry, of alienating everyone around her by being obsessed with her mother’s death. Later, her newly discovered sister Maty Vaughn smashes a beer bottle with her telekinetic powers after an outburst, anger coursing through her as much as magic. The youngest sister, Maddie Vera, kicks a monster in the body of a man across the room.

Though the development teams for these spinoffs and reboots are likely juggling the demands of advertisers, a possessive fanbase and what you can legally show on TV, it’s telling that the witches we’re being offered now are consumed with rage. It’s a dark world, and they’re fighting back with their dark arts. Ding, dong, the witch lives.

As much as Satan may think he’s gaining ground, though, God’s kingdom continues to explode.

Multiple revivals are breaking out across the country with thousands of salvations and miracles among them.

James tells us to resist the devil and he will flee, so maybe don’t indulge in pop culture’s latest obsession.