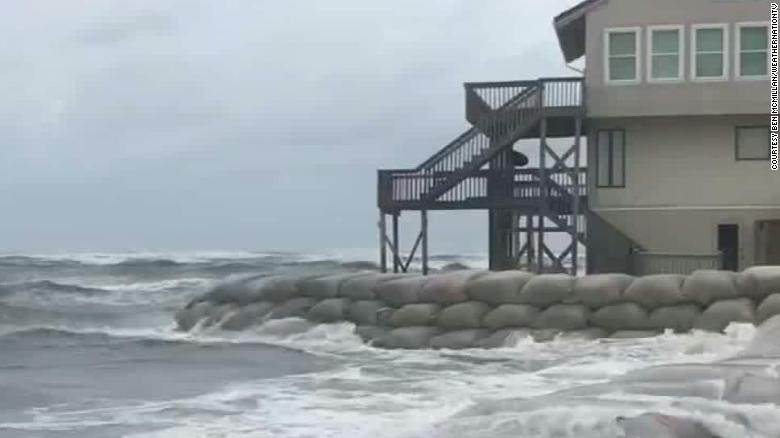 At 6 a.m., Florence was nearing landfall with 90-mph winds, heavy surf and torrential rain that triggered flooding and knocked down trees and power lines.

Some 150 people were awaiting rescue in New Bern early Friday morning. Nearly 200 people had already been rescued, according to Colleen Roberts, a city public information officer. New Bern, a city of about 30,000 residents saw significant storm surge flooding after the Neuse River overflowed its banks and swept into the town.

Craven County spokeswoman Amber Parker told ABC News that some people were trapped on their roofs. “I would say certain areas of New Bern are very desperate,” she told the network.

Roads were covered with flood water in what was expected to be the first of many waves of ever-worsening floods.

More than 20 inches of rain had fallen on Emerald Isle and Atlantic Beach by Friday morning.

Officials in Onslow County reported major damages to homes in business around the county. Onslow encompases the Marine Corps Base Camp Lejeune and the cities of Jacksonville and Topsail Beach.

The first flooding was reported near N.C. 12, the roadway that runs through the Outer Banks – the chain of barrier islands off the North Carolina coast. The state Transportation Department said water and sand cover the highway near Rodanthe and in Avon, Buxton and just north of Hatteras Village.

Ahead of the storm, Gov. Roy Cooper ordered a mandatory evacuation of all barrier islands; evacuation orders are usually issued locally, and several areas already ordered evacuations ahead of Cooper’s decree.

Scenes of storm surge washing over roads and sloshing into houses on the state’s beaches played out all Thursday afternoon, including on Avon Beach, Carolina Beach and Topsail Beach.

At a Thursday evening news conference, Cooper said flooding also had been reported along the Cape Fear River, which flows south of Wilmington, and at the Bogue Sound south of Morehead City. He said wind and waves are driving water onto roads along the coast.

“We in North Carolina have to shift from preparation to determination. We will survive this and endure,” Cooper said.

Michael Nelson floats in a boat made from a metal tub and fishing floats after the Neuse River went over its banks and flooded his street during Hurricane Florence Sept. 13, 2018 in New Bern, North Carolina. (Chip Somodevilla/Getty Images)
Original Article:https://weather.com/safety/hurricane/news/2018-09-13-hurricane-florence-north-carolina-impacts