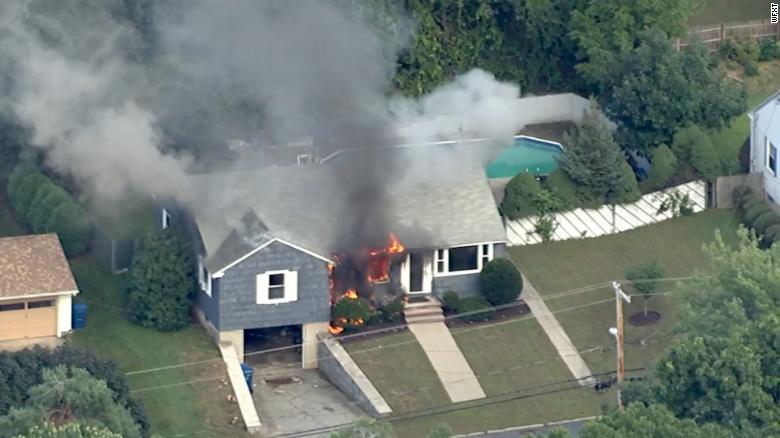 Massachusetts authorities on Friday warned still-stunned residents of three towns north of Boston that the return to normalcy could take time following a string of deadly gas explosions that set homes ablaze, forced evacuations and left one person dead.

Hundreds of natural gas technicians were to descend on the towns of Lawrence, Andover and North Andover over the coming days to restore gas service safely before electricity could be turned on, state officials said.
“Utility technicians must do their jobs in order to make sure everyone has a safe place to return to,” Gov. Charlie Baker told reporters Friday. “This will not be an easy process and we ask for continued patience.”
Kurt Schwartz, director of the Massachusetts Emergency Management Agency, said, “How long is it going to take? As long as it takes. … We don’t know today how long this will take.”
A house goes up in flames Thursday in northeastern Massachusetts north of Boston.
The investigation into the cause — involving the National Transportation Safety Board and other federal agencies — is in its early stages, officials said.
“Once the utilities secure the affected areas we’ll work with the federal government to investigate how this occurred and who should be held accountable for the results and actions,” Baker said.
As pressure mounted Friday for gas company officials to provide answers about what happened, Sens. Ed Markey and Elizabeth Warren of Massachusetts called for a congressional hearings on the explosions and fires.
“People have a right to know,” Markey told reporters. “There’s oftentimes a tendency, when there are accidents like this, for a company to huddle down, to try to protect their shareholders when their one goal should be just to protect the people who they are serving. We’re going to be here to make sure that that happens.”
Thursday evening, homes erupted in flames across the three towns, consumed by more than 60 suspected gas fires.
“It looked like Armageddon, it really did,” Andover Fire Rescue Chief Michael B. Mansfield said.
One house in Lawrence exploded, sending the chimney flying. It crashed into a nearby car, fatally wounding a teenager who was inside. Leonel Rondon, 18, and two of his friends were in the car when the debris struck, his family told CNN affiliate WHDH. He later died at the hospital, authorities said.
Also in Lawrence, a boiler inside Ra Nam’s house caught fire, he told CNN affiliate WCVB.
Minutes later, he said he heard a loud booming sound from his neighbor’s house. Three people rushed out. About 25 people, including two firefighters, were wounded, officials said.
“This has been an overwhelming event,” Mansfield said. “I have been in the fire service for almost 39 years and I have never seen anything like this in my entire career.” 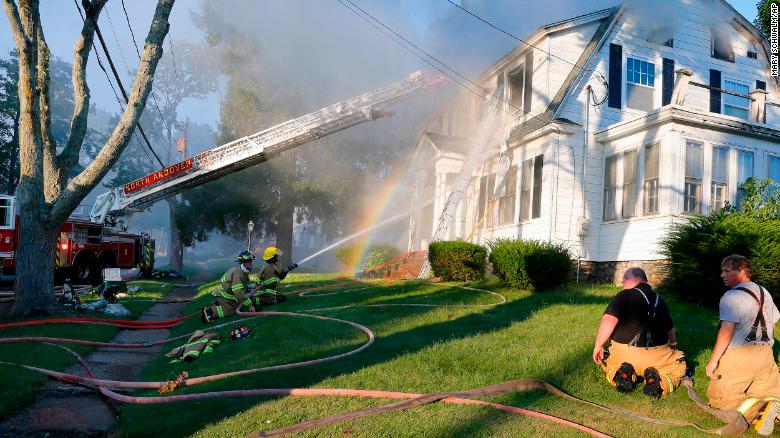 Gas technicians and first responders went door to door reviewing thousands of homes in Lawrence, Andover and North Andover and shutting down gas mains.
Officials were also shutting down power in the three towns, Massachusetts State Police said Thursday evening. The agency confirmed at least 70 responses to fire, explosions and gas odor reports. About 18,000 customers were without power.
The blazes left 8,000 people unable to go home Thursday. A middle school in North Andover and a senior center in Andover were set up for evacuees, according to state police.
Schools were to be closed Friday in Lawrence and Andover. All state offices in the three towns were also closed, and nonemergency employees were told to stay home.
The NTSB sent a team Friday to investigate what “appears to be multiple explosions involving (a) natural gas pipeline in the Merrimack Valley area of Massachusetts,” NTSB Chairman Robert Sumwalt said.
Sumwalt said his agency would look at “the design of the pipeline system, any maintenance or upgrades being done or in process of being done on the pipeline. The integrity management system of the pipeline operator Columbia Gas. We’ll look at the emergency response, the system safety program of the pipeline operator.”
“Our mission is to find out what happened, so that we can learn from it and keep it from happening again,” he said.

Information about the full extent of the damage was not immediately available Thursday night, and authorities cautioned it was “far too early to speculate” on the cause of the explosions.
Earlier Thursday before the fires broke out, the utility company that services the area announced it would be upgrading natural gas lines in neighborhoods across the state.
“Weather permitting, work will take place Monday through Friday,” Columbia Gas said in a statement. Andover, North Andover and Lawrence were included in the planned projects.
Gas service was interrupted for 250 customers in Lawrence last month because of a line hit by a third party, according to the company. It’s unclear whether that incident was related to Thursday’s fire and explosions. 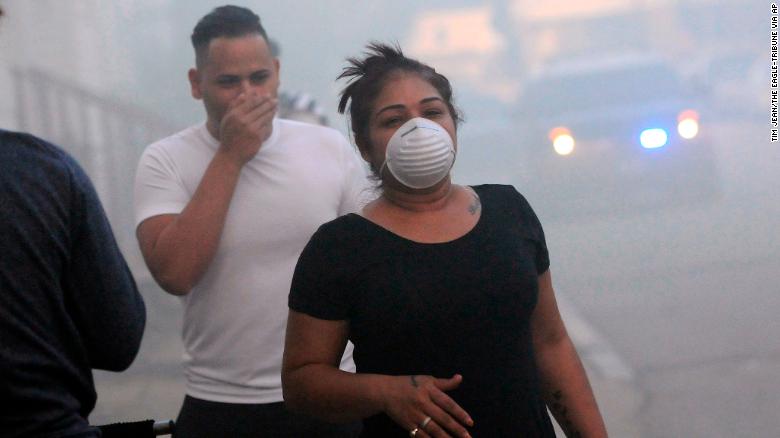 Residents protect their faces against the smoke while being evacuated Thursday in Lawrence, Massachusetts.
The governor said he urged Columbia Gas to develop a “comprehensive safety inspection plan.”
Lawrence Mayor Daniel Rivera said residents won’t be allowed to return home until crews inspect every home and make sure there are no more gas leaks.
“We are not sure that’s going to be anytime soon. Make plans for at least between now and this time tomorrow,” Rivera said early Friday.
The explosions and emergency response caused Amtrak to cancel four train routes between Boston and Maine.

Utility works with officials to ‘investigate this incident’ 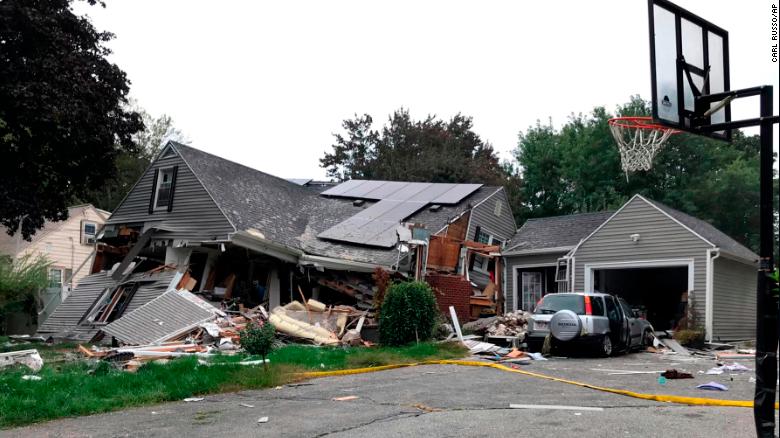 A house in Lawrence is reduced mostly to rubble Thursday after a series of explosions.
In a statement Friday, Columbia Gas said crew members are working to restore power with the help of other utility companies.
“Our thoughts are with the community and everyone impacted by yesterday’s tragic incident. We are focused on providing as much support as possible to our customers, residents and communities,” the company said in the statement.
Columbia Gas also said it’s working with officials to “investigate this incident in order to understand its cause.”
Original Article:https://www.cnn.com/2018/09/14/us/massachusetts-explosions-fires/