The nature of the relationship between God and Jesus was first agreed by the church at the First Council of Nicaea, then part of the Roman Empire, in 325 AD.

Held by Constantine I, the first emperor to convert to Christianity, the council brought bishops from across the world to the shores of Lake Ascanius to agree the particulars of their faith.

Archaeologist Mustafa Şahin has spent years scouring the shores of the modern-day lake, Lake Iznik in Turkey, searching for historical treasures from that time.

But it was only when the government of Bursa Province commissioned some aerial photos of the lake that he spotted a church submerged in its waters.

“The photography team in Bursa City Hall have been capturing the aerial photos of the Lake since 2013, but hadn’t thought of contacting any expert,” said Dr Şahin.

“So when they started capturing aerial pictures of the lake again, team member Saffet Yilmaz contacted me and asked if the remains of the structure might have meant something.

“When I first saw the images of the lake, I was quite surprised to see a church structure that clearly.

“I’d been doing field surveys in Iznik since 2006 and hadn’t yet discovered a magnificent structure like that.” 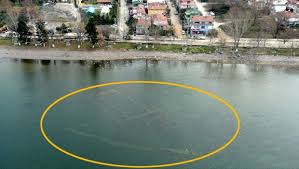 Lake Iznik is where the church was discovered (Image: PENNEWS)

The church was found thanks to some aerial photos (Image: PENNEWS)

Dr Şahin believes the church marks the place where Saint Neophytos was martyred in 303AD and that it was built in his honour.

It may also mark the site of the former Senate Palace where the first First Council of Nicaea took place nearly 1700 years ago.

There is even evidence of an earlier temple there dedicated to Apollo, a Greek and Roman god sometimes associated with Jesus in the early Christian period.

The church itself was destroyed by an earthquake in 740 AD and later sank beneath the lake.

“The ruins remain two to three metres deep in the lake and 50 metres from the shore,” said Dr Şahin.

“The hardest part of the underwater excavation is that visibility sometimes drops under 10cm because of intense algae and plankton activity.

“Another special difficulty is slime being spreading throughout the water from the top of the lake’s base during the excavation.

“Having the remains on a shallow surface also means the waves hitting archaeologists during their work, which affects work negatively.”

To surmount the problems, the team takes soil from the site to the shore, and sifts through it there.

Now Mustafa, who is head of archaeology at Bursa Uludağ University, wants the site to become Turkey’s first underwater museum.

“It is suitable to become an underwater museum for three reasons,” he said.

“It might be the basilica of Saint Neophytos, the Senate Palace where the First Council of Nicaea met might have been there, and lastly the Temple of Apollo might be underneath.”

The museum would include a 20-metre tower to allow the ruins to be seen from the shore, a walkway over the lake itself, and a submerged glass room at the nave where visitors can pray.

There would also be a diving club, allowing visitors to see the structure up close.

Construction could begin as early as this year, ready to open in 2019.

“There is actually no need to wait for the end of excavation to built a museum,” said Mustafa.

“With our excavation methodology, the visitors aren’t a distraction for the work in progress.”

As well as agreeing the nature of the relationship between God and Jesus, the First Council of Nicaea set a date for Easter, and created the Nicene Creed, which is still used in Catholic Mass.

The council decided overwhelmingly in favour of the former.