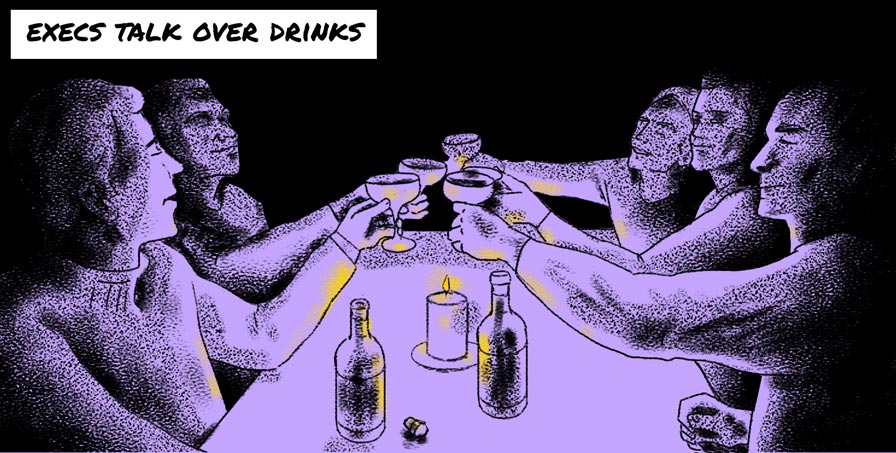 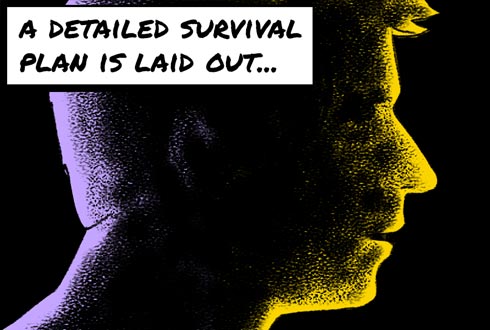 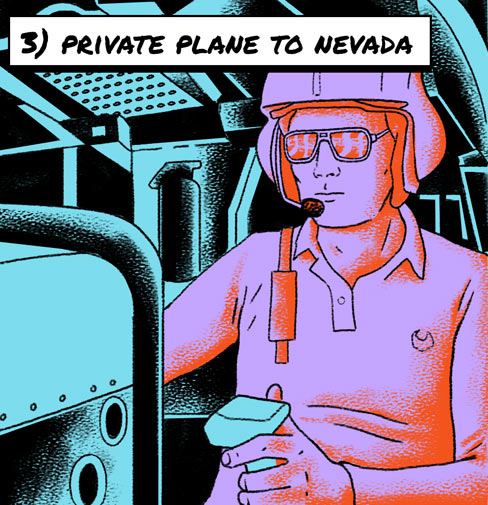 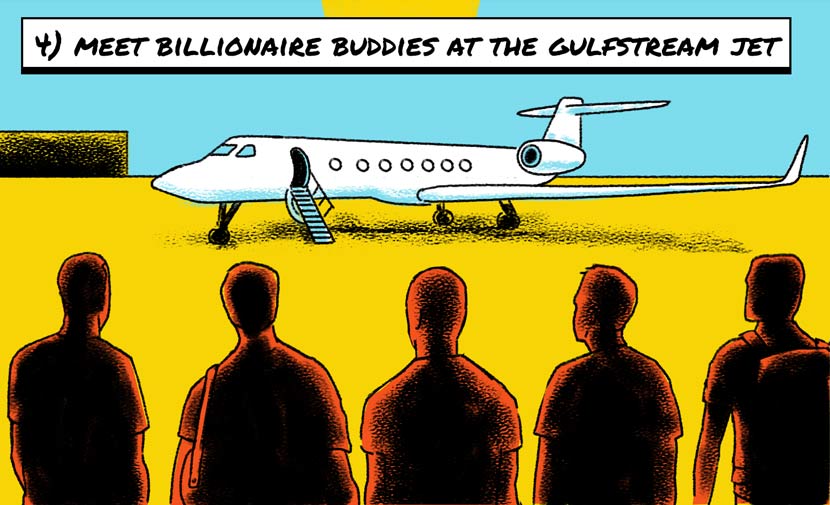 Years of doomsday talk at Silicon Valley dinner parties has turned to action.

In recent months, two 150-ton survival bunkers journeyed by land and sea from a Texas warehouse to the shores of New Zealand, where they’re buried 11 feet underground.

Seven Silicon Valley entrepreneurs have purchased bunkers from Rising S Co. and planted them in New Zealand in the past two years, said Gary Lynch, the manufacturer’s general manager. At the first sign of an apocalypse — nuclear war, a killer germ, a French Revolution-style uprising targeting the 1 percent — the Californians plan to hop on a private jet and hunker down, he said.

“New Zealand is an enemy of no one,” Lynch said in an interview from his office in Murchison, Texas, southeast of Dallas. “It’s not a nuclear target. It’s not a target for war. It’s a place where people seek refuge.”

The remote island nation, clinging to the southern part of the globe 2,500 miles off Australia’s coast, has 4.8 million people and six times as many sheep. It has a reputation for natural beauty, easy networking, low-key politicians who bike to work, and rental prices half those of the San Francisco Bay Area. That makes it an increasingly popular destination not only for those fretting about impending dystopia, but for tech entrepreneurs seeking incubators for nurturing startups.

“It’s become one of the places for people in Silicon Valley, mostly because it’s not like Silicon Valley at all,” said Reggie Luedtke, an American biomedical engineer who’s moving to New Zealand in October for the Sir Edmund Hillary Fellowship, a program created to lure tech innovators.

Luedtke, 37, said people in California have asked him if he’s relocating as part of a doomsday contingency plan, because “that’s what the country is known for.”

Such notoriety has made New Zealand’s isolation, once deemed an economic handicap, one of its biggest assets. The nation allows emigres to essentially buy residency through investor visas, and rich Americans have poured a fortune into the country, often by acquiring palatial estates.

The Investor Plus Visa, which requires a minimum investment of NZD$10 million ($6.7 million) over three years, attracted 17 U.S. applicants in fiscal 2017, after President Donald Trump’s election. Previously, it averaged six applicants a year.

More than 10 Americans from the West Coast have bought multimillion-dollar properties in the Queenstown region in the past two years, said Mark Harris, managing director of the local Sotheby’s real estate office.

In August, partly in response to Americans gobbling up swaths of prime real estate, New Zealand’s government banned foreigners from buying homes, with the restrictions set to take effect in coming months.

Peter Thiel, the billionaire co-founder of PayPal, ignited an uproar when he was granted citizenship after spending just 12 days in the country, prompting allegations that New Zealand’s passport was for sale. Thiel, 50, owns a $13.8 million home on 477 acres (193 hectares) in the lakeside town of Wanaka, with views of snow-capped mountains, and purchased another property in Queenstown, outfitted with a safe room.

“If you’re the sort of person that says ‘I’m going to have an alternative plan when Armageddon strikes,’ then you would pick the farthest location and the safest environment — and that equals New Zealand if you Google it,” former Prime Minister John Key said in a phone interview.

“It’s known as the last bus stop on the planet before you hit Antarctica,” he said. “I’ve had a lot of people say to me that they would like to own a property in New Zealand if the world goes to hell in a handbasket.”

Kiwis would find this both crazy and amusing, Key said, but it makes sense for some of the wealthiest people on the planet.

“We live in a world where some people have extraordinary amounts of wealth and there comes a point at which, when you have so much money, allocating a very tiny amount of that for ‘Plan B’ is not as crazy as it sounds.”

At three recent Silicon Valley dinner parties, guests discussed bugging out to New Zealand if there’s trouble, according to attendees who asked not to be identified because the events were private.

At one, a prominent venture capitalist was said to have told fellow diners of his escape plans. In the garage of his San Francisco home, he told guests, is a bag of guns hanging from the handlebars of a motorcycle. The bike will allow him to weave through traffic on the way to his private plane, and the guns are for defense against encroaching zombies that may threaten his getaway.

He intends to fly to a landing strip in Nevada where a jet sits in a hangar, its sole purpose to whisk him and four billionaire co-owners to safety. Their destination: New Zealand — or Aotearoa, which means “Land of the Long White Cloud” in Maori.

In the event of a pandemic, Sam Altman, president of Silicon Valley startup incubator Y Combinator, plans to escape to New Zealand with Thiel, the New Yorker reported in 2016. Now he says he was just joking.

“The world is so interconnected now that if anything was to happen, we would all be in pretty bad shape, unfortunately,” Altman, 33, said in a phone interview. “I don’t think you can just run away and try to hide in a corner of the Earth.”

Still, Altman said biological warfare is the biggest threat to civilization and that people aren’t “as scared enough about that as they should be.”

He has a go bag stuffed with a gun, antibiotics, batteries, water, blankets, a tent and gas masks. 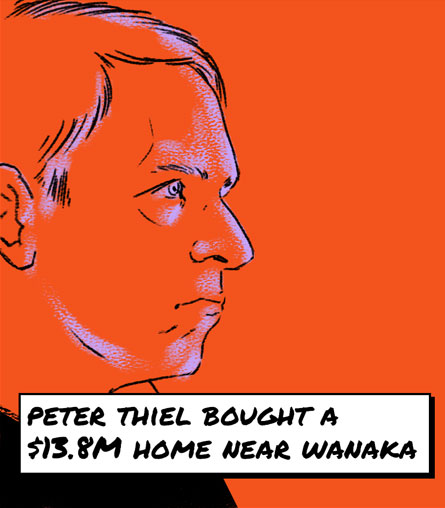 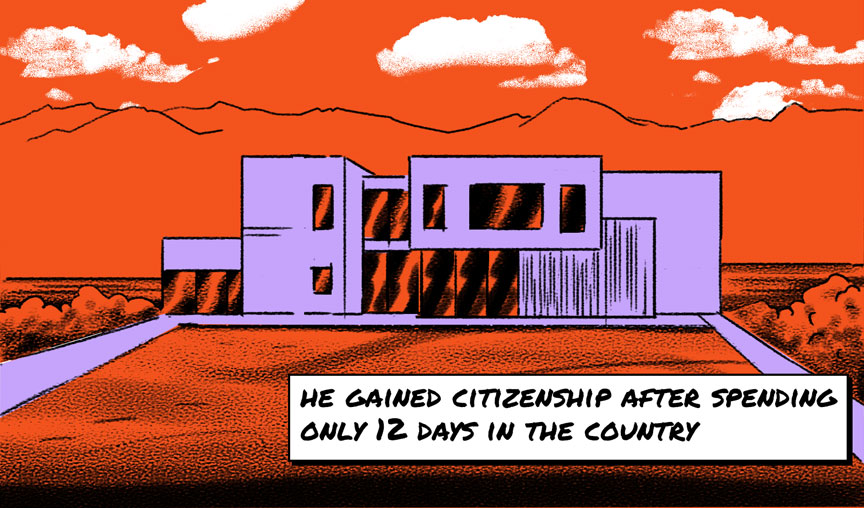 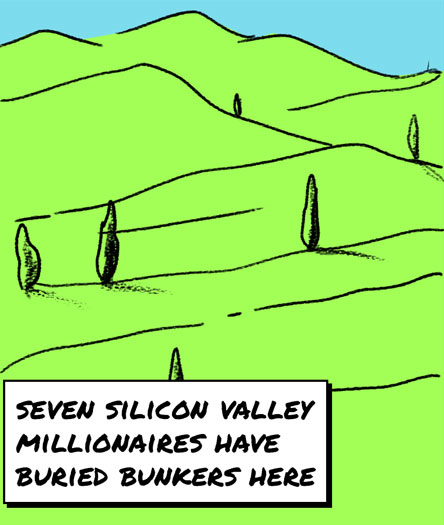 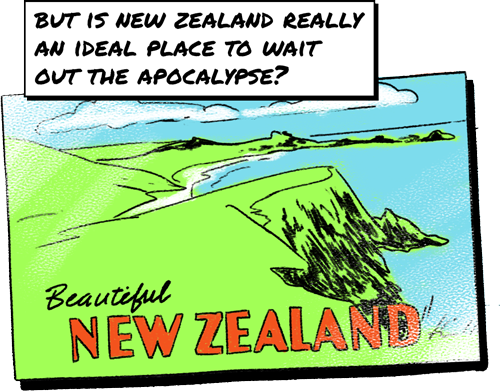 Think of schoolchildren practicing the duck-and-cover maneuver during the height of the Cold War. Apocalyptic religious cults never seem to end well, from Jim Jones’s Peoples Temple in the 1970s to Heaven’s Gate and the Branch Davidians in the 1990s. Just six years ago, many Americans believed the world was ending because of a Mayan prophesy.

What’s different about Silicon Valley is that those entertaining fears of the eschaton have the means to put elaborate plans into action.

Robert Vicino, founder of the Vivos Project, a builder of massive underground bunkers, said Silicon Valley elites discussed detailed plans to flee to New Zealand last year at the World Economic Forum in Davos, Switzerland. He said they foresaw “a revolution or a change where society is going to go after the 1 percenters.” In other words, them.

New Zealand isn’t the best solution, he said, because a tsunami caused by an asteroid strike in the Pacific could submerge the island’s highest point.

Photos from the Rising S factory in Murchison, Texas 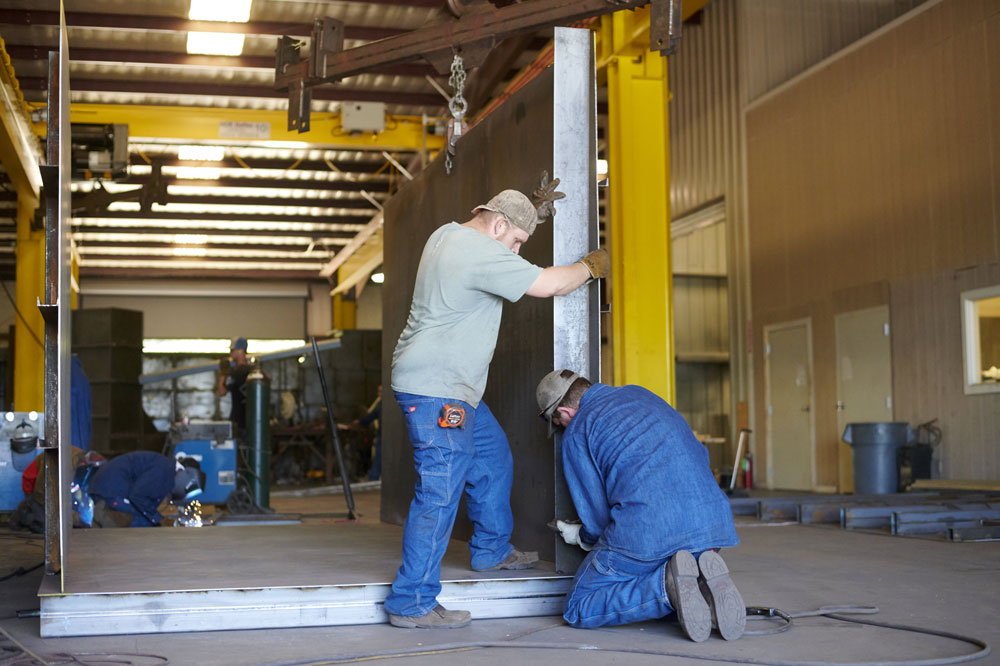 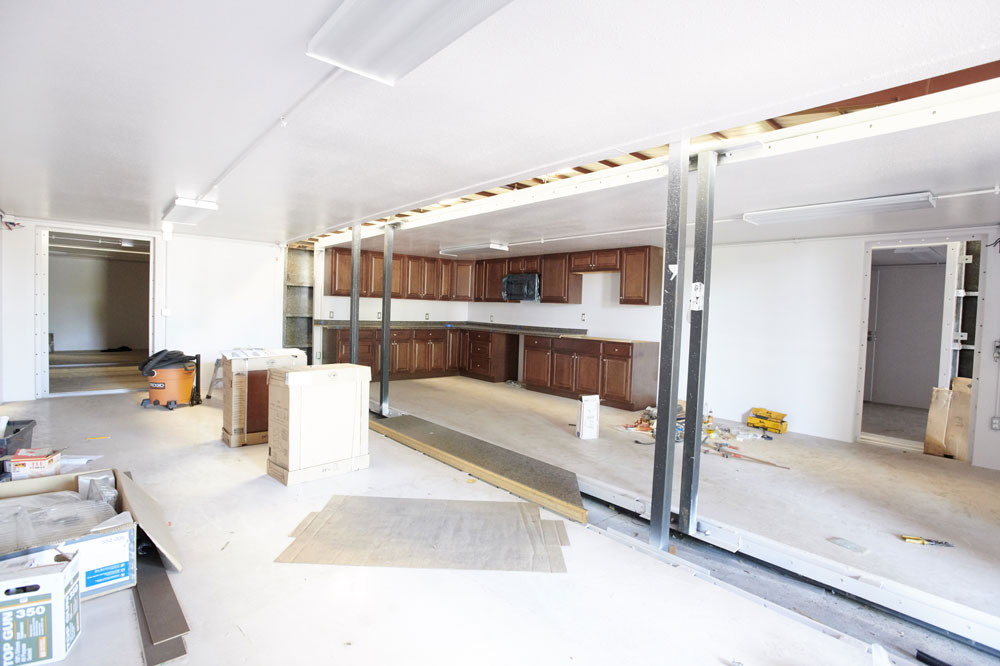 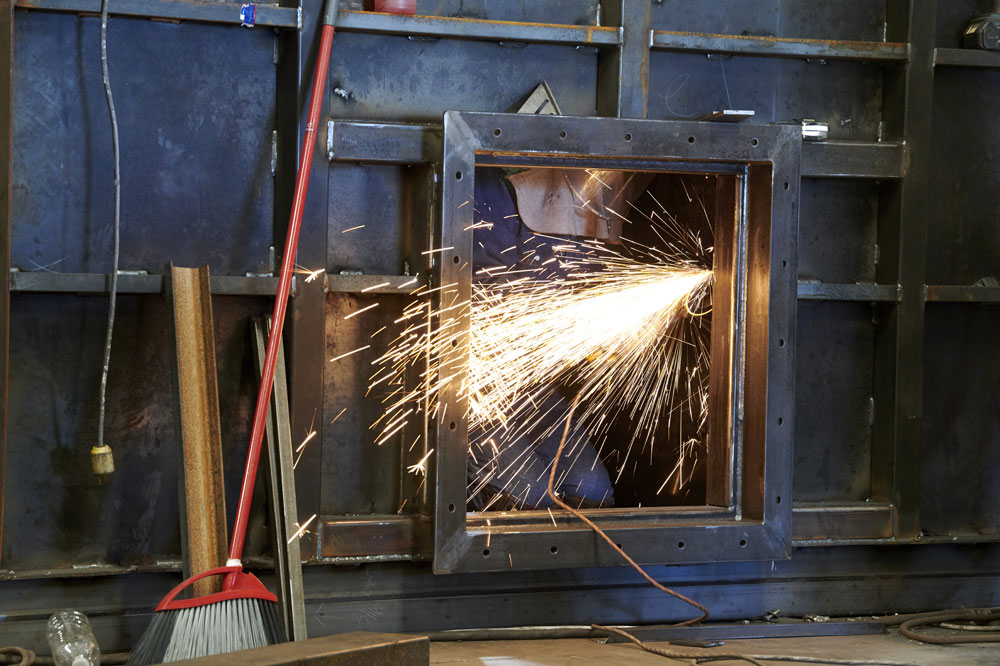 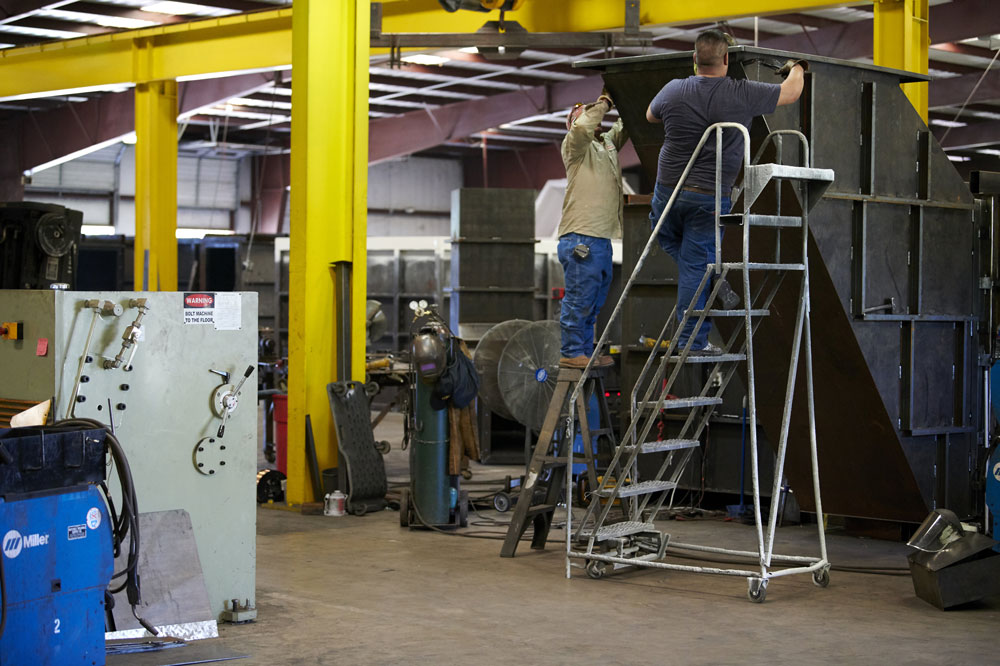 But Vicino is a businessman, and demand dictates he get to work on a bunker on the northern tip of the South Island that would accommodate about 300 people. The price: $35,000 a head.

That’s a bargain compared with the most expensive bunker Lynch’s Rising S has shipped to New Zealand — $8 million.

The two 1,000-square-foot bunkers sent earlier this year had to be divided into sections and loaded onto 19 tractor-trailers to start the trek from Texas, he said.

One landed in Picton, across the Cook Strait from Wellington, to be transported to a sleepy town on the West Coast. The other arrived at Auckland’s Waitemata Harbor and settled into the dirt somewhere in Northland, a rugged region fringed by wild beaches.

A spokeswoman for the New Zealand Customs Service declined to confirm that the bunkers had arrived in the country, citing privacy reasons.

It takes about two weeks to excavate the land and bury the average bunker, Lynch said. It’s all done secretly so local residents aren’t aware. Once installed, passersby would have no way of knowing it’s there.

“There’s no clue left behind, not even a door,” Lynch said.

So the sight of an American billionaire wandering the sheep meadows consulting his GPS and kicking at the dirt can only mean one thing: It must be New Zealand.