An outbreak of hearing loss and other health problems affecting at least 16 employees at the US embassy in Havana could have been caused by an electronic surveillance operation that went wrong, former intelligence officials said on Friday. 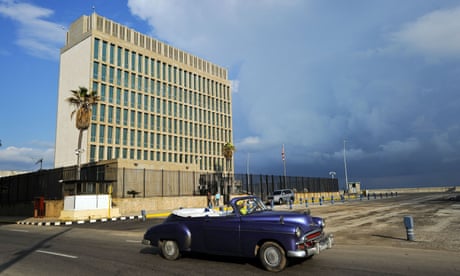 The state department said it was investigating the outbreak, and that some of the worst affected diplomats had been evacuated to Miami for examination and treatment.

“This is something that we have not experienced in the past,” Heather Nauert, the department’s spokeswoman, said. “We are working very hard to try to take care of our folks who are there on official duty – and trying to provide them all the care and the treatment and the support that they would need.”

Earlier this months, US officials had said the symptoms appeared to have resulted from a covert sonic device. But Nauert said on Thursday no device nor any perpetrator had yet been found and that Cuba was cooperating with the US investigation.

The US asked two Cuban diplomats to leave in May, after American embassy officials were forced to leave Cuba because of serious symptoms. But the Cuban diplomats were not banned from returning, as normally happens in expulsions linked to espionage, and the US has so far not explicitly blamed the Castro government.

Two former US officials with a background in intelligence and surveillance said they had doubts that the health problems were the result of a deliberate attack with a sonic weapon. They pointed out that the symptoms were first noticed in late 2016, when US-Cuban relations were the best they had been in decades, following the visit of Barack Obama to Havana.

CNN quoted a US official saying Washington was investigating whether a third country was involved as “payback” for actions the US has taken elsewhere and to “drive a wedge between the US and Cuba”. However, at least one Canadian diplomat is also said to have been affected, suggesting whatever happened did not exclusively target the US embassy.

“You can’t rule out harassment, but why do it when you want things to go well, and why the Canadians? Nobody dislikes the Canadians!” said James Lewis, a former state department official and US military adviser with expertise in intelligence and spy technology.

Lewis said it was much more likely that a sonic surveillance device, designed to remotely pick up the vibrations caused by speech, could have been wrongly configured and emitted harmful sound waves as a result.

“We know with 100% certainly that the embassies are under surveillance, and the technology being used could just be crude and over-powered,” he added. Although Nauert had said the Cuban incidents was unprecedented, Lewis pointed to a wave of health problems at the US embassy in Moscow in the 1970s thought to be linked to the use of microwave surveillance devices.

John Sipher, who spent 28 years in the CIA’s National Clandestine Service, argued that while direct targeting of US diplomats is rare, unintended harm caused by surveillance efforts that go wrong are much more common.

“These efforts, while designed to further surveillance and eavesdropping and not to cause malicious damage, nevertheless risked or resulted in residual physical harm to US diplomats,” Sipher said in a commentary on the Just Security website.

Sonic weapons are being developed by security forces around the world. The Israeli defence forces have a vehicle-mounted blaster called The Scream, while cruise ships have adopted a military grade “sound cannons” to project deafening noise over 300 metres to defend against possible pirate attacks.

However, such weapons have an immediate, crippling effect. Whatever has happened in Havana appears to have crept up on its victims more gradually and subtly.