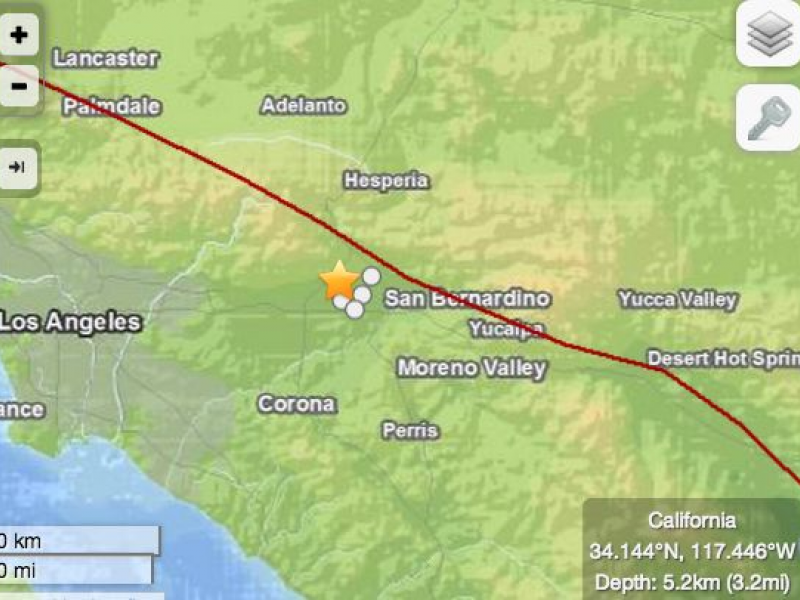 That depth — relatively shallow — is what allowed the quake to be felt across the region, according to earthquake expert Lucy Jones.

“People who were very near it would have had strong shaking, potentially even throwing a few things off of shelves,” Jones said during a briefing at the Caltech Seismological Laboratory. “As you get farther away, the shaking gets lower and more rolling motion.”

It was felt as far as the Santa Clarita Valley, Victorville and Riverside.

Scientists at Caltech were alerted to the quake three second before it hit thanks to its early warning system.

Imperceptible shaking would likely continue — or, Jones said, the 4.4 magnitude quake could have actually been a precursor to something larger.

“We’re continuing to have magnitude 1s and 2s,” she said. “It would not be at all a surprise to have another felt event with this one, and in fact — like any earthquake in California — this has about a 5 percent chance of being foreshock to something bigger.”

Jones said on Twitter that the quake happened near but not on the Sierra Madre fault, describing the shaking as a “strike-slip motion.”

Tuesday’s temblor was the second with a 4.4 magnitude to strike Southern California this month, following one east of Temecula on Aug. 12. But for the greater Los Angeles area, it’s the largest to hit in three years, Jones said in a tweet.

“We think it’s important because we felt it but the earth doesn’t care,” she added.

There were no immediate reports of damages or injuries following Tuesday’s event, said officials in L.A. County, La Verne, Irwindale and Ontario.

As a precaution, fire crews in several cities surveyed for damage, and students were evacuated from buildings at the University of La Verne.

“Haven’t felt an Earthquake while sitting in the car before. In Norwalk, saw my house sway and car in the driveway shaking,” Daniel Wilsey wrote.