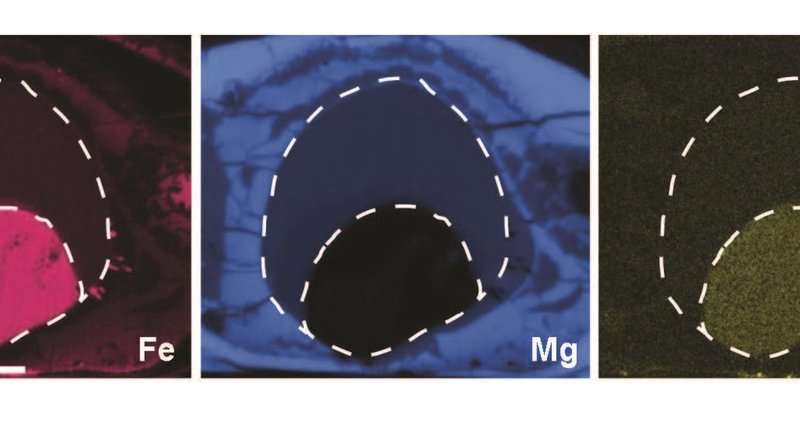 Plumes of hot rock surging upward from the Earth’s mantle at volcanic hotspots contain evidence that the Earth’s formative years may have been even more chaotic than previously thought, according to new work from a team of Carnegie and Smithsonian scientists published in Nature.

It is well understood that Earth formed from the accretion of matter surrounding the young Sun. Eventually the planet grew to such a size that denser iron metal sank inward, to form the beginnings of the Earth’s core, leaving the silicate-rich mantle floating above.

But new work from a team led by Carnegie’s Yingwei Fei and Carnegie and the Smithsonian’s Colin Jackson argues that this mantle and core separation was not such an orderly process.

“Our findings suggest that as the core was extracted from the mantle, the mantle never fully mixed,” Jackson explained. “This is surprising because core formation happened in the immediate wake of large impacts from other early Solar System objects that Earth experienced during its growth, similar to the giant impact event that later formed the Moon. Before now, it was widely thought that these very energetic impacts would have completely stirred the mantle, mixing all of its components into a uniform state.”

The smoking gun that led the team to their hypothesis comes from unique and ancient tungsten and xenon isotopic signatures found at volcanic hotspots, such as Hawaii. Although it was believed that these plumes originated from the mantle’s deepest regions, the origin of these unique isotopic signatures has been debated. The team believes that the answer lies in the chemical behavior of iodine, the parent element of xenon, at very high pressure.

Isotopes are versions of elements with the same number of protons, but different numbers of neutrons. Radioactive isotope of elements, such as iodine-129, are unstable. To gain stability, iodine-129 decays into xenon-129. Therefore, the xenon isotopic signatures in plume mantle samples are directly related to iodine’s behavior during the period of core-mantle separation.

Using diamond anvil cells to recreate the extreme conditions under which Earth’s core separated from its mantle, Jackson, Fei, and their colleagues—Carnegie’s Neil Bennett and Zhixue Du and Smithsonian’s Elizabeth Cottrell—determined how iodine was partitioning between metallic core and silicate mantle. They also demonstrated that if the nascent core separated from the deepest regions of the mantle while it was still growing, then these pockets of the mantle would possess the chemistry needed to explain the unique tungsten and xenon isotopic signatures, provided these pockets remained unmixed with the rest of the mantle all the way up through the present day.

According to Bennett: “The key behavior we identified was that iodine starts to dissolve into the core under very high pressures and temperatures. At these extreme conditions, iodine and hafnium, which decay radioactively to xenon and tungsten, display opposing preferences for core-forming metal. This behavior would lead to the same unique isotopic signatures now associated with hotspots.”

Calculations from the team also predict that the tungsten and xenon isotopic signatures should be associated with dense pockets of the mantle.

“Like chocolate chips in cookie batter, these dense pockets of the mantle would be very difficult stir back in, and this may be a crucial aspect to the retention of their ancient tungsten and xenon isotopic signatures to the modern day,” Jackson explained.

“Even more exciting is that there is increasing geophysical evidence that there actually are dense regions of mantle, resting just above the core—called ultralow velocity zones and large low shear velocity provinces. This work ties together these observations,” Fei added. “The methodology developed here also opens new opportunities for directly studying the deep Earth processes.”

Read More:Compasses Go Haywire In Hawaii As Lava Flows As Lava Flows Magnetically Opposite Of The Rest Of The Planet, Suggesting Magnetic Pole Reversal