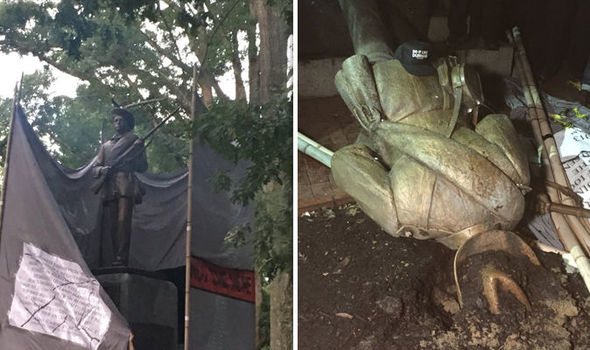 Protesters toppled the Silent Sam Confederate statue on the campus of UNC-Chapel Hill on Monday night.

The monument was ripped down after 9:15 p.m. Earlier in the evening, protesters covered the statue with tall, gray banners, erecting “an alternative monument” that said, in part, “For a world without white supremacy.”

Protesters were apparently working behind the covering with ropes to bring the statue down, which happened more than two hours into a rally. It fell with a loud clanging sound, and the crowd erupted in cheers.

After Silent Sam tumbled to the ground, people darted in and out of the crowd through a haze from smoke bombs. Atop the statue someone placed a black cap that said, “Do It Like Durham,” an apparent reference to the toppling of a Confederate statue there a year ago.

People rushed to the remains, taking photos and stomping on the monument that had been erected in 1913 with donations from the United Daughters of the Confederacy. The statue has been the focus of protests and vandalism for decades, but especially in the past year. UNC had installed surveillance cameras and spent $390,000 on security around the statue last year.

Stephanie Chang, 21, a recent UNC graduate, said she followed the crowd to campus after word spread on Franklin Street. By the time she got there, she saw Silent Sam’s head on the ground. Soon, police were covering the statue with a tarp.

“It’s like, Silent Sam has been tucked in, put to bed,” Chang said.

Andrew Skinner, 23, who graduated from UNC earlier this year, said he was glad the statue fell in an illegal act.

“It shows that we have the power to be on the right side of history,” Skinner said. “We are part of a long tradition of civil rights in this country…..We as a country have a lot of change and a lot of healing to do, and we are not going to get there putting racism on a pedestal.”

Monday’s gathering started as a demonstration in support of a UNC graduate student who faces criminal and honor court charges for throwing red ink and blood on the Confederate statue in April. The downtown Franklin Street event quickly morphed into a march to the UNC campus, where police officers stood at the monument.

A skirmish broke out early when someone threw a smoke bomb. Police chased one man and arrested another for resisting, delaying and obstructing an officer.

The protesters quickly took control of the area immediately around the statue, hoisting four tall banners in a square that almost completely obscured it. The head of the Confederate soldier occasionally poked out from the top of the banners.

Police formed a perimeter around protesters. One banner said, “The whole world is watching. Which side are you on?” Some of the demonstrators wore Carolina blue bandannas over their faces that said, “Sam must fall.”

Several bystanders wearing Confederate flags on T-shirts watched the protest. Clint Procell, 31, wore a Trump hat. A self-described conservative, Procell said he wanted to see for himself how intolerant the people protesting Silent Sam were, and the experience didn’t disappoint. He said he was pushed and his hat was temporarily stolen.

“The main reason for me to come was to see the people fighting against Trump,” he said. He described some of the protesters’ language as hateful against police and conservatives, but said he also had several conversations that were remarkably open.

The event unfolded as students begin a new semester at UNC Tuesday, almost a year after a massive march against Silent Sam in the aftermath of violence in Charlottesville. Protesters vowed to sustain the pressure on the university to relocate the Confederate monument, but campus and UNC system officials insisted a 2015 state law prevented them from doing so.

“Around 9:20 p.m., a group from among an estimated crowd of 250 protesters brought down the Confederate Monument on the campus of the University of North Carolina at Chapel Hill,” the statement said. “Tonight’s actions were dangerous, and we are very fortunate that no one was injured. We are investigating the vandalism and assessing the full extent of the damage.”

Gov. Roy Cooper’s office also released a statement, saying he “understands that many people are frustrated by the pace of change and he shares their frustration, but violent destruction of public property has no place in our communities.”

The question by late Monday was what will happen now that the statue has been torn off its base. It was face down in the mud as a late night thunderstorm passed through town. Police cordoned off the area around the statue with yellow crime scene tape. Eventually, the statue was loaded into a truck.

The rally had started peacefully with the singing of the black national anthem, “Lift Every Voice and Sing.”

Maya Little, the doctoral history student who had doused the statue with ink and her own blood in April, appeared and protesters chanted her name. She took the microphone and spoke of an African-American man, James Lewis Cates, who was stabbed by a white motorcycle gang on the UNC campus in the early 1970s.

Little’s action in April, which she has said symbolized the “black blood” at the statue’s foundation, has become a rallying cry of those who oppose the Confederate monument on the UNC campus.

Another graduate student, Jerry Wilson, said being a black man on UNC’s campus was a lonely experience. He read what he said was a letter he had written to UNC Chancellor Carol Folt.

“When you have to take the long way between classes in order to avoid the sight of a statue that denies your human dignity, the Southern Part of Heaven can feel an awful lot like hell,” said Wilson, who studies education.

He said the university had bowed to the wishes of donors and well-heeled leaders who wanted to see the statue stay at UNC. Wilson placed a rope, fashioned as a noose, around his neck and vowed to wear it until Silent Sam was gone.

After the initial skirmish, town and university police officers took a hands off approach, standing a short distance away, keeping a watchful eye on the protest. After about two hours, many of the marchers headed to Franklin Street, followed by some of the officers. A core group of protesters stayed with the statue.

A short time later, Silent Sam was pulled down, sending people screaming and jumping in disbelief. Smoke bombs were set off around what was left of the monument.

Retired professor Hodding Carter III was walking his dog in the area when he saw what happened, but could barely believe his eyes.

Police stood guard over the pedestal and the fallen statue, while people in the crowd hugged and raised their cell phones to capture the moment.

Rain began to fall, and thunder rolled in.

In the distance, car horns honked on Franklin Street, and people streamed out of the bars, though this time the commotion wasn’t about a basketball championship.

But it sounded like it. In the pouring rain, the crowd around Silent Sam yelled: “Tar!” “Heels!”