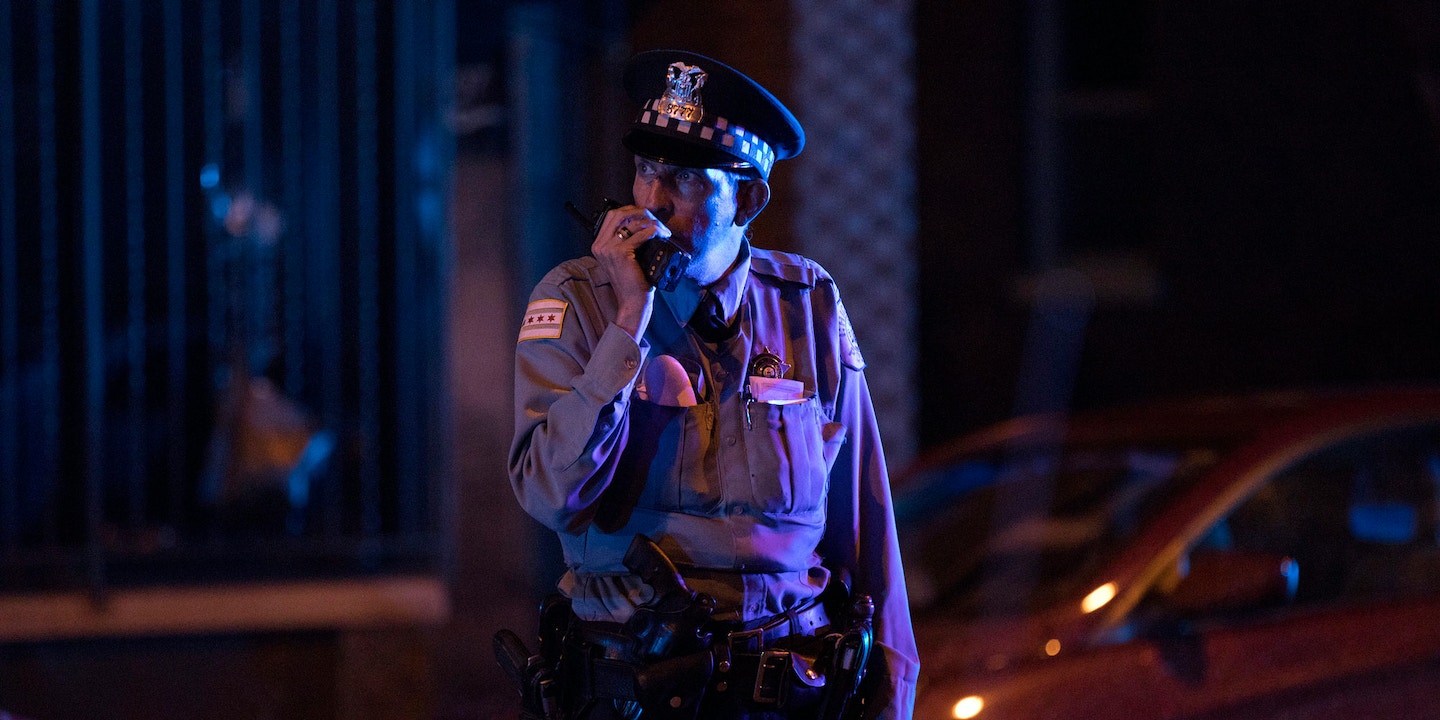 The latest technologies promise cops the ability to whip out a smartphone, take a snapshot of a passerby, and instantly learn if that person is in an immigration or gang database.

A federal broadband program, designed after 9/11 to improve first responder communication during emergencies, will enhance this sort of capability and integrate it into an internet “super highway” built specifically for police and public safety. The program, called FirstNet, is already expanding the surveillance options available to law enforcement agencies across the country.

The program will also hasten these agencies’ migration from public radio frequencies to encrypted broadband networks, potentially eliminating one resource that local newsrooms and citizens have historically relied upon to monitor police and first responders.

FirstNet is a public-private partnership that creates a dedicated lane for public safety agencies within AT&T’s existing broadband network. As of January, all U.S. states had opted in to FirstNet, meaning that they agreed not to build their own competing broadband lanes for law enforcement and public safety. Then, in March, AT&T announced that FirstNet’s core — the infrastructure that isolates police traffic from the commercial network — had become operational at last.

“It’s like having a super highway that only public safety can use,” the company wrote in a press release.

Part of FirstNet’s mission is to create a virtual space that allows any federal, state or local law enforcement or public safety agency to communicate seamlessly with any other. Therefore, convincing as many agencies as possible to sign up for the program is key to its success.

FirstNet recently pitched U.S. Customs and Border Protection to convince the agency to subscribe to the network. In a white paper, FirstNet claims its services will provide CBP access to “photographs, real-time audio/video feeds, and databases from other state, local, or Federal agencies … to aid in the identification and apprehension of terrorists, undocumented aliens, and smugglers.” These capabilities would be offered “in times of crisis or simply day-to-day operations.”

In the pitch, FirstNet also promises to help agents “connect to critical databases to identify whether detained persons have been previously apprehended for violating immigration law by quickly and efficiently collecting biographic (e.g., name, date of birth, place of birth) and biometric information (e.g., 10-print fingerprints, photo image), which are submitted remotely to said databases.” The document also promotes FirstNet’s support of other data-heavy technologies, such as live video streaming from drones.

Local law enforcement officials are well-aware of the new capabilities that FirstNet is offering their departments. Domingo Herraiz, programs director at the International Association of Chiefs of Police, is excited about the heightened access to federal data FirstNet promises. Herraiz told The Intercept that FirstNet will place information from fusion centers, which enable criminal intelligence-sharing between government agencies, at the fingertips of local officers. “You could have gang databases,” he said. “It’s not there [on officers’ phones] today, but it will be.”

A “Private Tunnel” for Law Enforcement and First Responders

The concept behind FirstNet — a broadband network dedicated to public safety — was inspired by the National Commission on Terrorist Attacks Upon the United States (the so-called 9/11 Commission). Its 2004 report determined that streamlined communication between different agencies and jurisdictions could have saved lives in the aftermath of the attacks on the World Trade Center. The report blamed the use of separate radio frequencies by police and firefighters for the deaths of firefighters who didn’t get the message to evacuate before the north tower collapsed.

The government’s subsequent quest for improved public safety communication has led to the expansion of Joint Terrorism Task Forces, which integrate local, state, and federal anti-terrorism operations, as well as a network of 79 fusion centers. The idea to dedicate a nationwide, high-speed broadband network to law enforcement and public safety was another outgrowth of this effort. Congress acted on the proposal in 2012, when it created FirstNet as part of the Middle Class Tax Relief and Job Creation Act. Rather than create a network that would be totally independent from commercial broadband, the legislation reallocated some broadband spectrum for “public safety” use and allowed service providers to bid on the contract for it.

In March 2017, the U.S. Department of Commerce signed a contract with AT&T, creating a dedicated lane for FirstNet within AT&T’s existing broadband network. In the deal, the federal government gave AT&T rights to 20 MHz of lucrative broadband spectrum, as well as $6.5 billion for FirstNet’s initial rollout. In return, the government got AT&T’s commitment to spending $40 billion over the next 25 years on network buildout and maintenance. Since 2013, the Department of Commerce has also awarded $116.5 million in funding to state Homeland Security agencies, offices of information technology, public safety agencies, and statewide communication boards to help implement and promote the network.

Scott Edson is the executive director of the Los Angeles Regional Interoperable Communications System, a fully independent public safety network built with some of the early funding for FirstNet. According to Edson, when local agencies subscribe to FirstNet, they will get “a special connection that looks just like a commercial carrier but [connects to] what’s called a dedicated core.” FirstNet is “a private tunnel within their AT&T network,” he explained.

FirstNet provides “priority” and “pre-emption” privileges that have long been desired by public safety agencies. “Priority” means faster access to broadband-based services. “You may have license plate readers that are scanning cars that are nearby and querying databases automatically,” explained Edson, who is also former chief of special operations at the Los Angeles County Sheriff’s Department. “That’s all data that’s going to be prioritized to help us do our job.”

But priority is not always enough to guarantee a fast connection during an emergency or a large gathering like a parade, sporting event, or protest, when networks can get jammed. That’s where “pre-emption” comes in. Pre-emption allows public safety agencies or police to boot the general public off the network.

“At a time of crisis, yeah, you’re trying to call your mom and say you’re safe,” Herraiz from IACP told The Intercept. “But it’s more important that that network shut down every citizen, so it can be used solely for public safety purposes, so lives can be saved.”

Before FirstNet, the commercial broadband industry would not offer these public safety privileges on its networks. “They told us we would never have priority and pre-emption,” Edson told The Intercept. But if providers like Verizon, Sprint, and T-Mobile want to compete with FirstNet, they, too, will have to begin offering priority and pre-emption. (In January, Verizon announced that it would begin to phase in these features.)

Though all U.S. states have agreements with FirstNet, this doesn’t commit state or local agencies to subscribing to the service. Most agencies currently subscribe to Verizon, which announced its own dedicated “core” for public safety users in March. (In February, the company aired a Super Bowl ad suggesting that it intends to retain its market share with first responders.)

But subscriptions for FirstNet are picking up quickly. In June, AT&T announced that more than 1,000 agencies had signed up. The company also announced that over 5,300 of its retail stores would offer personal FirstNet subscriptions to “verified” police and first responders whose agencies don’t provide wireless plans. (Volunteer first responders are eligible for this offer as well.)

Indeed, FirstNet has its own “app store.” In a slide presentation it prepared for the Association of Public-Safety Communications Officials conference in August 2017, FirstNet touted its intention to “enable development of a growing portfolio of public safety apps.” These applications will incorporate facial recognition, real-time video, and other existing technologies, according to the presentation.

Millions of dollars of government research funding are underwriting this development. For example, the Department of Commerce’s National Institute of Standards and Technology is funding research into real-time video analytics (including the automated recognition of faces, objects, and text), a “hyper-reality helmet for mapping and visualizing public safety data” in the field, and livestreaming and analytics for body-worn cameras, among other technologies.

According to Dereck Orr, chief of the Public Safety Communications Research Division at NIST, most of the research into these technologies will eventually be made public. However, he added, “we certainly bring [FirstNet] in to discuss creation and priorities of new processes, because we want to make sure that anything we do is going to be something that is impactful and useful to FirstNet.”

A Loss of Public Oversight?

With this frenzy of technological development, a longtime transparency tool is suddenly under threat. For decades, local newsrooms and citizen watchdogs have relied on police scanners to monitor first responders and track natural disasters, protests, and emergencies. The migration to data-based communications cuts down on what is communicated over these public frequencies. As FirstNet and its competitors transition voice communications to their encrypted broadband networks in the coming years, even more will be kept from public oversight.

That concerns Andrew Seaman, ethics committee chair for the Society of Professional Journalists. Seaman told The Intercept that he hopes measures will be taken to guarantee journalists and newsrooms access to the encrypted FirstNet network.

“There are very practical reasons why there should be a relationship between first responder emergency systems and the press,” he said. “If you want people to know what’s going on — that they should avoid a certain area or if they need to get out of an area quickly — you’re going to need to equip journalists with the ability to monitor these channels.”

FirstNet did not comment on whether it was open to offering local newsrooms some access. Edson of LA-RICS said decisions about transparency and access for newsrooms will likely have to take place at the local government level.

FirstNet is already the subject of a transparency lawsuit by two Vermont men who claim that the U.S. government is legally required to perform a Privacy Impact Assessment on the program, since the FirstNet network will presumably be used to transmit personal information about American citizens. The government has argued that this requirement does not apply since the network itself is owned by AT&T, rather than the government.

The program’s status as a public-private partnership has created other transparency roadblocks as well: The federal government’s contract with AT&T has not been made public.

Some have criticized FirstNet as a waste of public funds because after years of talk, it has produced few deliverables. However, its ultimate impact on U.S. broadband is likely to be extensive, if incremental. For example, FirstNet’s prioritized section of the broadband spectrum is now being extended to some private entities, like electric utilities, that help first responders or provide essential services during emergencies.

FirstNet’s most lasting achievement may be the infrastructure it provides for state-of-the-art surveillance technologies to be deployed by law enforcement at every level. One of FirstNet’s early adopters, the Brazos County Sheriff’s Office, has celebrated how FirstNet allows it to livestream surveillance footage to its central command. Only time will tell if the program can enable emerging technologies like real-time facial recognition to become part of the day-to-day operations of U.S. police.

Despite the surveillance enhancements that FirstNet offers local police departments, some are skeptical that local governments (and voters) can be convinced that subscribing to the program is a worthy investment.

“The public believes law enforcement already has all this at their fingertips,” Herraiz told The Intercept. “They think when you run a license tag or your driver’s license, the cops know everything about you. That’s not true.”