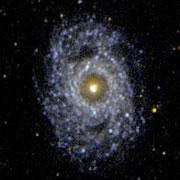 Welcome to the fourth dimension. And the fifth, and the sixth. A team of astrophysicists claims to have identified evidence that space is six-dimensional.

Joseph Silk of the University of Oxford, UK, and his co-workers say that these extra spatial dimensions can be inferred from the perplexing behaviour of dark matter. This mysterious stuff cannot be seen, but its presence in galaxies is betrayed by the gravitational tug that it exerts on visible stars.

Silk and his colleagues looked at how dark matter behaves differently in small galaxies and large clusters of galaxies. In the smaller ones, dark matter seems to be attracted to itself quite strongly. But in the large galactic clusters this doesn’t seem to be the case: strongly interacting dark matter should produce cores of dark material bigger than those that are actually there, as deduced from the way the cluster spins.

One explanation, they say, is that three extra dimensions, in addition to the three spatial ones to which we are accustomed, are altering the effects of gravity over very short distances of about a nanometre1.

The team argues that such astronomical observations of dark matter provide the first potential evidence for extra dimensions. Others are supportive, but unconvinced. Lisa Randall, a Harvard physicist who has explored the possibility of extra spatial dimensions, says “Even if their idea works, which it probably does, it may be an overstatement to use these observations as evidence of extra dimensions.”

Silk himself acknowledges that the proposal is “extremely speculative”.

Too small to see

Physicists have suspected for years that ‘hidden’ dimensions exist, largely because they seem to be predicted by string theory, the current favourite for a theory of fundamental subatomic particles.

These extra dimensions are generally thought to be tiny: many billions of times smaller than atoms. This would make these dimensions very hard to detect, explaining why the Universe looks as if it has just three. Physicists such as Randall, however, have proposed that some extra dimensions might be relatively big, but inaccessible to us.

The extra dimensions that Silk and colleagues say they have identified are likewise ‘big’, at about a nanometre across. In other words, they say, the Universe is only about a nanometre wide in these three ‘directions’.

They argue that the force of gravity does not obey Isaac Newton’s famous laws over small distances, where these dimensions come into play. This has never been tested experimentally: no one has measured how gravity behaves over distances below about a hundredth of a millimetre.

This variation in gravity, says Silk, could be why dark matter behaves differently in different galactic environments.

According to one interpretation of the astronomical observations, dark matter, which is thought to account for 85% of all the mass in the Universe but not to be made from the known fundamental particles, seems to attract itself through some unknown force. And this attraction seems to be stronger in dwarf galaxies than in galactic clusters. This is very odd: it is rather as if apples were to fall faster from single trees than from trees in an orchard.

But the attraction isn’t due to an unknown force, argue Silk and his colleagues, but to the effect of extra dimensions on gravity. And because dark matter particles are accelerated to higher speeds in massive galactic clusters than in dwarf galaxies, they spend less time close to each other, so the effects of these extra dimensions are felt less.

There are other ways of explaining the puzzling dark-matter distributions, admits Silk’s colleague Ue-Li Pen of the University of Toronto in Canada. For example, one could assume that the rate at which stars explode, as supernovae, was quite different in the past.

“Personally, I think changing the supernovae rate is more conservative than changing the number of spatial dimensions,” Pen confesses. But he thinks that invoking extra dimensions is such an exciting idea that it is worth investigating, “even if it is a long shot”.

The most popular versions of string theory suggest that there are as many as eight extra dimensions, not just three. But thankfully this needn’t be a problem. There’s no reason why, in addition to the three large extra dimensions predicted by Silk and colleagues, there might not be several other small ones too.

Read More:CERN Symmetry Measurements Prove That Matter And Anti-Matter Are Mirror Images Of Each Other