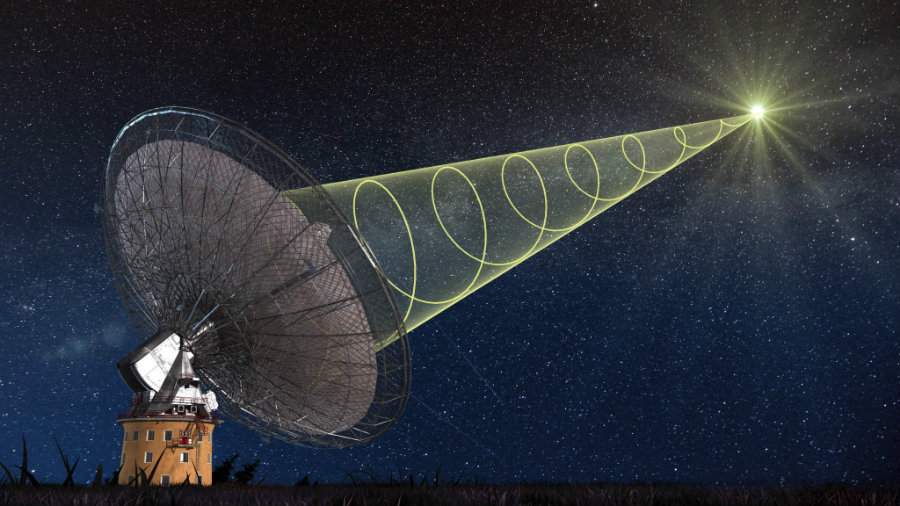 An unidentified radio emission from deep space has been recorded by a new radio telescope in British Columbia, but where the 20-second-long recording came from remains a mystery.

It adds to the confounding astronomical conundrum that is Fast Radio Bursts, or FRBs. These enigmatic blips of bright powerful radiation travel more than 3 billion light-years across deep space and last just a few milliseconds. Nobody knows why, where, or when they will strike next, but they do provide a few clues about the space environments they pass through on their way to Earth much in the same way sonar allows us to read the seafloor.

Detected on July 25 by the Canadian Hydrogen Intensity Mapping Experiment (CHIME) telescope, it’s the first-ever FRB recorded at frequencies below 700 MHZ, according to the Astronomer’s Telegram, and has since been named FRB 180725A.

CHIME has been operating for less than a year in an effort to map hydrogen – the most abundant element in the universe – throughout space. In the same way, this “novel” radio telescope can pick up radio emissions by scanning 16,000 different frequencies corresponding to 130 billion bits of data per second. Once detected, these FBR events are sent automatically to a team of researchers for future analysis. The Astronomer’s Telegram said other FRBs have been found in the last week frequencies as low as 400 MHz, none of which are likely to be originating on Earth.

The international cosmic mystery dates back to more than a decade ago and has since been explained by everything from exploding black holes to highly-magnetized neutron stars to alien life.

“The joke is that the number of theories outnumbers the number of known bursts,” said astrophysicist Emily Petroff, who is not involved with CHIME, in a previous statement.

First discovered in 2007, FBRs have intrigued and confused astronomers. Since their discovery, FRBs have been confirmed to come from space, and continue to make headlines about the stories they tell scientists about space. Only one FRB has been found to repeat itself more than 150 times at high frequencies