Rafina, Greece: On July 23-24, 2018, 74+ people died to a raging wildfire that experts say was fueled by gale force winds and dry summer conditions.

This is the headline that is pumping through mainstream media coupled with tragic examples of how people died and the heroic attempts that went into trying to save them.

Scrolling through the released pictures, however, something does not seem right. 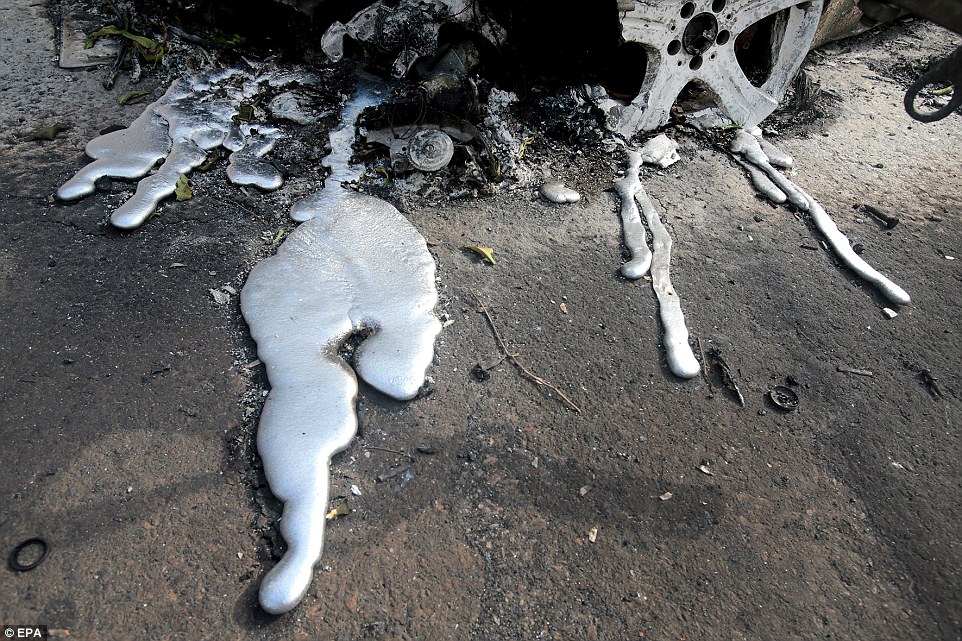 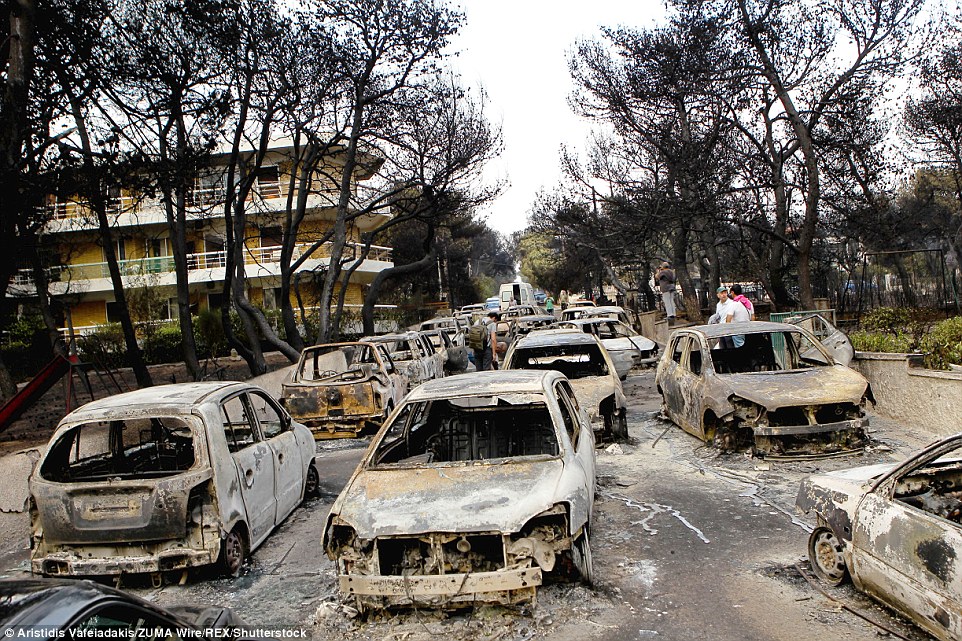 Engine blocks totally fried out of the cars – alloy wheels completely melted into a liquid and fused into the streets while surrounding buildings, asphalt and trees just a few feet away remained untouched.

How would the alloy wheels have been affected by enough heat to melt into the street without anything else around them being affected?

Look at the Volkswagon at the top right in the picture below. Notice the front passenger tire is melted into the street, yet the rest of the car is intact. How are the wooden electrical poles not incinerated? Look at all the untouched twigs, leaves and branches all along the sides of these cars? Even the sign on the left is still standing, yet I am sure is made of material that needs much less heat to melt. 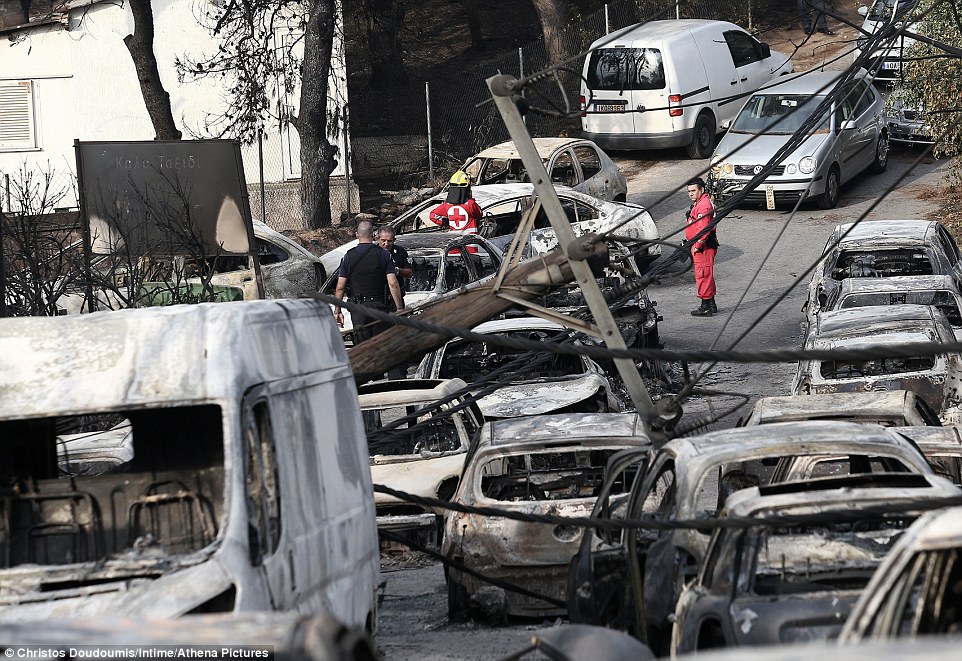 How about this next picture. Again the aluminum alloy wheels melted, but the flag and the wooden beams directly above it remain intact? 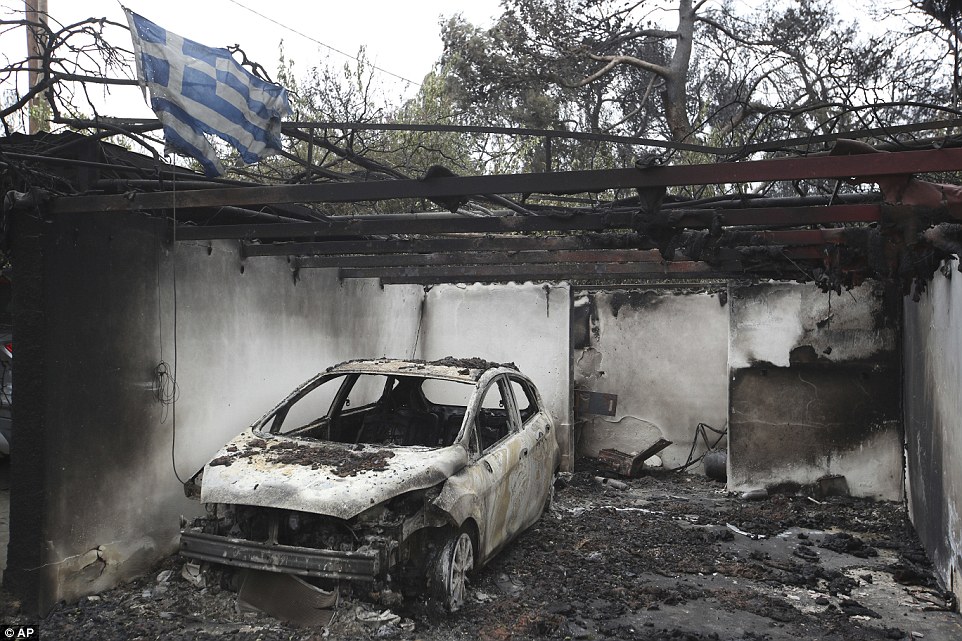 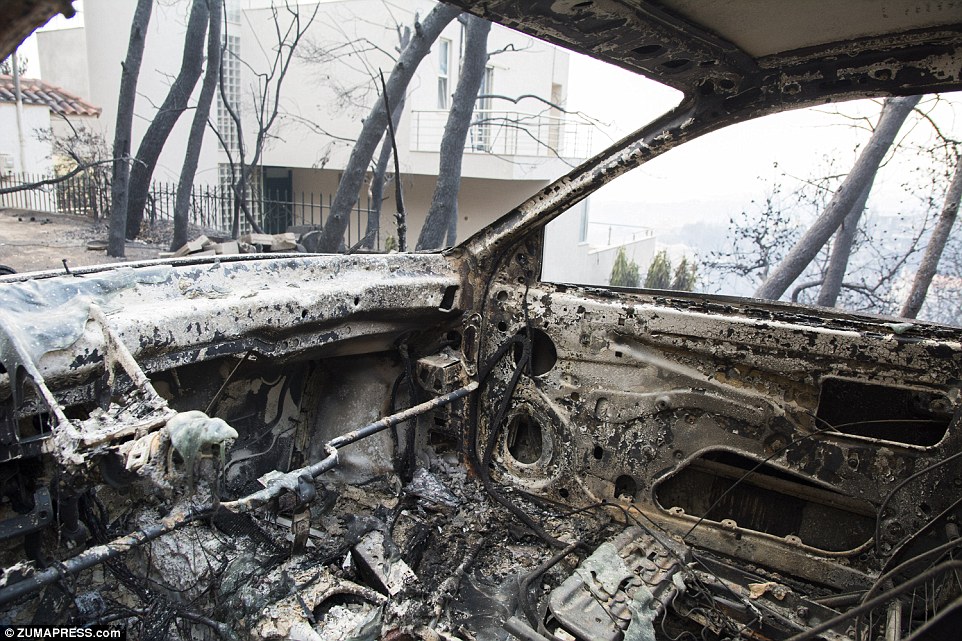 Flames were reported being concentrated and spotted, shooting hundreds of feet up into the air.

These are not the characteristics of a natural wildfire spawned by hot temperatures and fueled by brush and woodland. This was a fire that melted glass and aluminum alloy wheels in extremely concentrated areas, leaving surrounding buildings and vegetation unharmed.

What makes this even stranger is that 15 simultaneous wildfires started at the exact same time in 3 different areas around Athens, Greece. 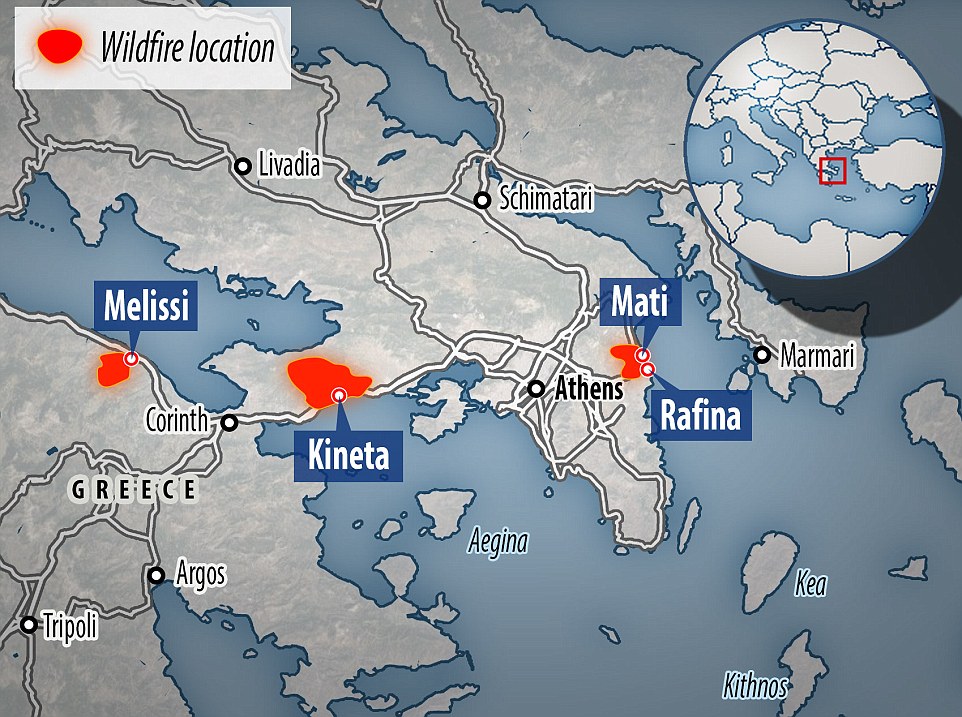 “Officials have asked for US drones ‘to observe and detect any suspicious activity’ as it emerged 15 fires had started at the same time in three different areas near Athens – possibly by criminals intending to ransack homes once they were abandoned by fleeing residents.” (source)

So even Greek officials suspected foul play, knowing these were not natural wildfires and turned to the aid of US drones in order to help them …

Why the aid of US drones? What could have really caused these fires and for what purpose?

According to US AirForceTimes back in 2016:

“Over the past 20 years, the military and its partners in industry have figured out how to build lasers and other directed energy weapons. The devices have changed from often-hazardous chemical lasers to more reliable solid-state lasers. The power has grown from dozens of watts to dozens of kilowatts.”

When the Air Force first developed a directed energy weapon in the early 2000s, it was so large it took up an entire modified Boeing 747:

The article goes on further to explain: “A lot of pragmatic challenges remain for directed energy weapons to become reality. Heithold said some of the biggest issues are the size and weight of a potential laser before it can be installed on a plane.”

Back in 2015, Lockheed Martin demonstrated its Advanced Test High Energy Asset (ATHENA) laser system for the US Army by blowing 5 drones out of the sky, as well as disabling vehicles from above. According to Digital Trends: “The weapon combines multiple fiber modules to generate an intense laser beam.”

“Our fiber lasers operate with an efficiency that generates less heat and exists in a smaller package allowing easier incorporation into various defense platforms. Our ALADIN laser has operated in the field for two years with no need for realignment, proving both the lethality and the reliability of our solutions.”

In its 1984 directed-energy plan, the SDI (Strategic Defense Initiative) included the development of ATP/FC systems for future directed-energy weapons, including the creation of systems to track a target at a range of up to 3,000 miles within a diameter of about 4 inches. Another was to create a computer algorithm to handle the ATP/FC of at least 100 simultaneous targets at a rate of at least two shots per second and then conduct damage assessment on each one … it offers the military and law enforcement plausible deniability of their use. (source)

So why go through the effort of using these weapons in Greece. Are they simply testing their weapons?

One article points out that this: “appears to be an act of sheer intimidation so that the government in Athens does not join Italy in rebelling against the European Union.  Even more significant is the necessity of the EU keeping Greece in line regarding immigration.  Greece is the key link in the chain for war refugees and economic immigrants traveling from the Middle East and North Africa now that Italy has shut down the Italian peninsula route.  Greeks are now protesting the influx of migrants like never before: Violence flares at Greek island protest over migrants.”

Another possible motive is indicated in the image below. Nothing as of yet could be verified, however, if anyone reading this has any information on whether or not this could be true, please comment below.

As many are beginning to point out, several California wildfires have the exact same characteristics: melted glass and aluminum while vegetation a few feet away remains untouched; fires springing up in concentrated pockets and having what many are calling a ‘flamethrower’ effect.

Our world is on fire. Soaring planetary temperatures may not be the sole culprit. Evidence continues to mount that we may be under attack in order to serve a sinister agenda.