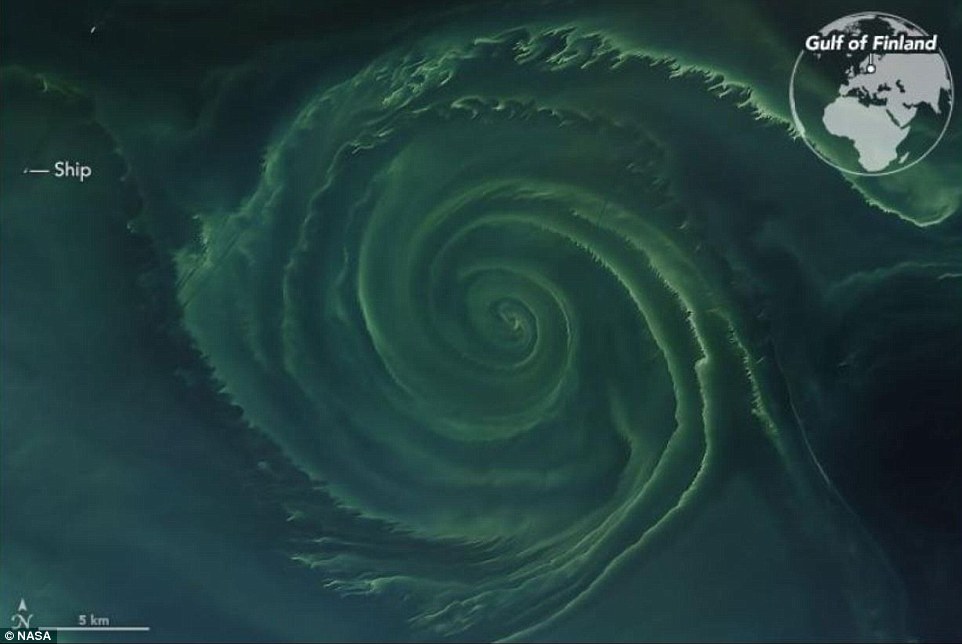 NASA has revealed an incredible image of a gigantic ‘whirlpool’ of algae in the Baltic sea.

Every summer, phytoplankton spread across the northern basins of the North Atlantic and Arctic Oceans, with blooms spanning hundreds and sometimes thousands of kilometers.

Blooms this summer off of Scandinavia seem to be particularly intense, NASA said.

The swirling bloom is at least 15 miles across, which means New York City’s Manhattan Island could fit inside it with a little room to spare.

Researchers are unsure what is causing the strange pattern. 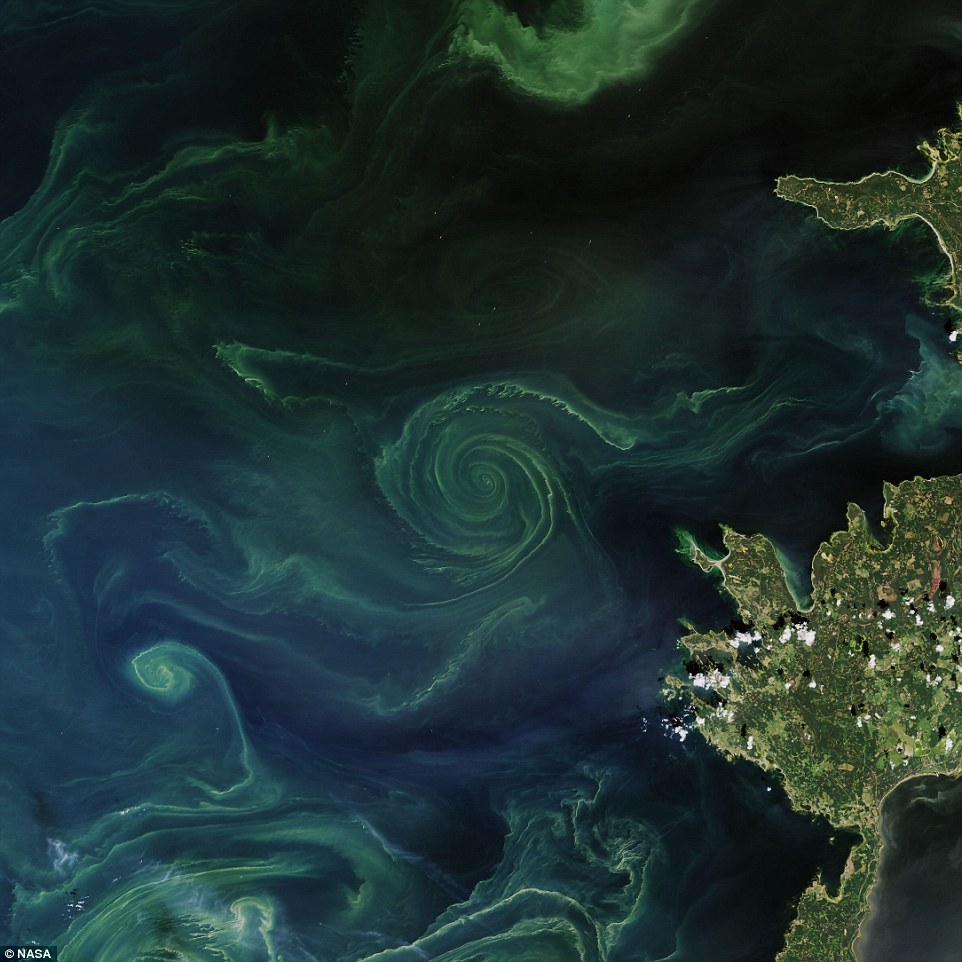 ‘Note how the phytoplankton trace the edges of a vortex; it is possible that this ocean eddy is pumping up nutrients from the depths,’ it said.

Nutrient-rich, cooler waters tend to promote more growth among marine plants and phytoplankton than is found in tropical waters, the agency added.

Though it is impossible to know the genus and species without sampling the water, three decades of satellite observations suggest that these green blooms are likely to be cyanobacteria (blue-green algae), an ancient type of marine bacteria that capture and store solar energy through photosynthesis (like plants).

Some of the greens also could come from diatoms, which are also rich in chlorophyll. According to news outlets, the Finnish Environment Institute (SYKE) has observed the recent bloom from the water and found it to be mostly cyanobacteria.

In recent years, the proliferation of algae blooms in the Baltic Sea has led to the regular appearance of ‘dead zones’ in the basin.

Phytoplankton and cyanobacteria consume the abundant nutrients in the Baltic-fueled largely by runoff from sewage and agriculture-and reproduce in such vast numbers that their growth and decay deplete the oxygen content of the water.

According to researchers from Finland’s University of Turku, the dead zone this year is estimated to span about 70,000 square kilometers (27,000 square miles).

Polish health authorities said Wednesday they had closed scores of beaches along the country’s Baltic Sea coast due to a massive toxic algae bloom triggered by a heat wave.

‘Swimming is prohibited on eight beaches along the open sea and about twenty beaches in Gdansk Bay because of the appearance… of cyanobacteria,’ Tomasz Augustyniak, health inspector for the northing Gdansk province, told AFP referring to blue-green algae.

‘The algae is toxic and poses a health risk,’ he said, adding that the week-old bloom was ‘particularly intense’ due to a long stretch of hot weather.

Scientists termed oxygen loss in the Baltic ‘unprecedentedly severe’ in a study published this month in the European Geosciences Union journal Biogeosciences.

They note that as a relatively small, shallow and enclosed sea, the Baltic has a very limited ability to flush out pollutants into the waters of the North Sea, making it an extremely vulnerable ecosystem.

A research team from Finland and Germany reported this month that oxygen levels in recent years in the Baltic Sea are at their lowest levels in the past 1500 years.

More frequent and massive blooms, combined with warming seas due to climate change, are making it harder for fish and other marine life to thrive in this basin.

The milky teal and white blooms are probably coccolithophores, which have tiny, chalky, calcium carbonate shells. The variations in brightness and color is related to both the concentration of phytoplankton and to the depth, as coccolithophores can grow as much as 50 meters below the water surface.

Research has shown that diatoms tend to dominate the waters of the Barents Sea in the early summer, when surface waters are well mixed.

As summer temperatures heat up and the water settles into warmer and cooler, fresher and saltier layers (stratification), coccolithophores start to take over.