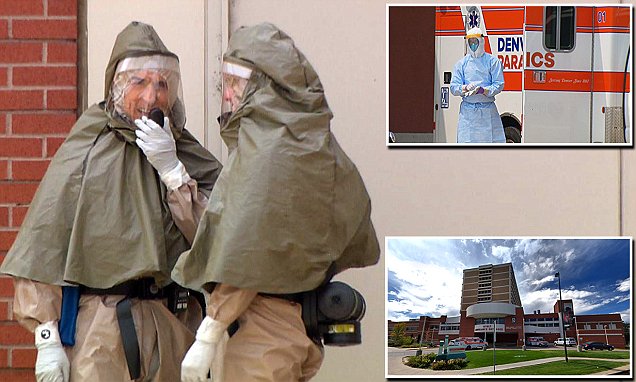 DENVER — A patient thought to possibly have contracted Ebola tested negative for the virus Sunday evening, according to officials with the Colorado Department of Public Health and Environment.

This was the second test of the day that returned a negative result.

The patient was admitted to Denver Health Sunday morning and put in the bio containment unit out of an abundance of caution.

The hospital is one of only ten in the country designated by the CDC to handle something like this.

At Denver Health, emergency workers wore special suits to protect them from the highly infectious disease.

Doctors say the Denver man began exhibiting symptoms of Ebola Sunday morning, which the CDC says can range from fever to severe headaches to vomiting.

The patient had recently returned from a medical missionary trip to the eastern part of the Congo, which known for Ebola hot spots.

Still, two paramedics and a student had been placed in isolation prior to the confirmation of a negative test result.

Doctors said the patient had been improving. They suspected his symptoms could be a variety of illnesses.

A patient at Denver Health Medical Center is being tested for Ebola in the hospital’s isolation unit, officials said on Sunday.

Hospital officials said that a patient arrived at the hospital at 8:30 a.m. on Sunday and say that Ebola is being considered as a “potential but unlikely diagnosis.” The patient is in fair condition and is being kept in isolation.

“From an initial review of the situation and the symptoms presented by the patient, it is unlikely that this will be confirmed as an Ebola case,” said Connie Price, an infectious diseases physician and Chief Medical Officer of Denver Health. “We are, however, following our standard procedures and taking every necessary precaution.”

Price said that the patient was in the Congo recently, where the outbreak was declared over but the patient had treated others and handled dead bodies during his time there.

So far the hospital’s lab tests have come back negative but a final determination will be made by the state health department.

Three people who had contact with the patient are in isolation and a vehicle that transported the patient has been quarantined.

The hospital said that operations are normal and there is no threat to patients or the public.

FOX31 talked to an infectious disease expert who said there tends to be a “fear-bola” mentality where you hear the term “Ebola” and it strikes fear, especially when the potential is now our community, but she said that’s not necessary in this case.

The deadly virus hit United States soil in 2014 with four confirmed cases. Thomas Duncan, a Liberian National, lied to officials about his exposure before boarding a plane to the U.S. Subsequently, two nurses who treated Duncan also contracted the virus.

Dr. Zajdowicz says since then, protocols on how to handle sickened patients have changed. “The protocols weren’t entirely in place as far as how to respond. I think we’ve learned from those cases and so I think we’ve progressed and developed better containment, understanding and training as far as how to prevent that exposure,” Dr. Zajdowicz said.

While Ebola is extremely infectious, it’s not extremely contagious. “It’s not airborne. It is spread through contact with infected body fluids, so blood, semen or contaminated meats or the bodies of the deceased,” Dr. Zajdowicz said.

Dr. Zajdowicz says unprotected health care workers are the most susceptible as they have close contact with the potentially infected patient.
“It’s the health care individuals who will be coming in to contact with all of the body fluids that are the highest risk.”

Ebola symptoms start out as a headache, mild fever and at day ten you start to see symptoms become more severe. “Where you’re having more of a high fever, perhaps some vomiting, diarrhea.”

Dr. Zajdowicz said even if the patient at Denver Health does test positive for Ebola, she says the risk for the community to become infected is extremely low.

Ebola is extremely infectious but not extremely contagious. It is infectious, because an infinitesimally small amount can cause illness. Laboratory experiments on nonhuman primates suggest that even a single virus may be enough to trigger a fatal infection.

Ebola could be considered moderately contagious because the virus is not transmitted through the air.

Humans can be infected by other humans if they come in contact with body fluids from an infected person or contaminated objects from infected persons. Humans can also be exposed to the virus, for example, by butchering infected animals.

Typically, symptoms appear eight to 10 days after exposure to the virus, but the incubation period can span two to 21 days.