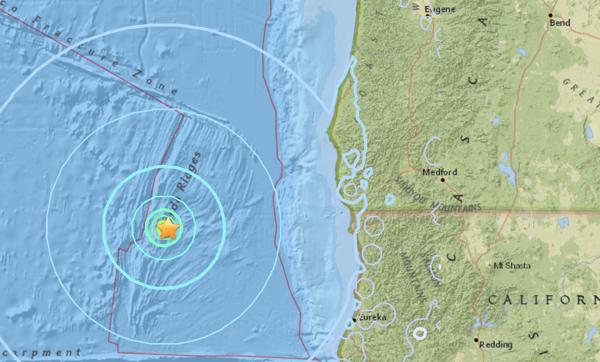 Eleven earthquakes ranging from 2.8 to 5.6 magnitudes were reported off Oregon’s southern coast Tuesday morning, according to the U.S. Geological Survey.

The quakes, on average, were clustered about 126 miles west of Crescent City, California. No tsunami warnings were announced.

Don Blakeman, a geophysicist at the National Earthquake Information Center, said the magnitudes haven’t yet been serious, adding that quakes of this caliber occur fairly often off the coast.

Though the 5.6, which happened at 7:44 a.m., qualifies as a moderate earthquake, the impacts would be more significant if it had occurred on land rather than 10 kilometers under the sea, Blakeman said.

Smaller earthquakes and aftershocks will likely continue in the area through the morning, he said, adding that he doesn’t anticipate a larger magnitude will come along and trump the 5.6.

Tsunami concerns don’t usually come into play until at least a magnitude 7 is recorded, he said.

The earthquakes happened on the Juan de Fuca tectonic plate, which will likely be the source of a massive earthquake in the Portland and Seattle area in the future, but Blakeman said the rumblings Tuesday morning were nothing to worry about.

Read More:A Series Of Catastrophic Events Around The Ring Of Fire Point To A Potentially Major Event In The Near Future

Read More:Earth’s Core Being Affected: Major Volcanoes Around The Ring Of Fire Are Going Off Like Firecrackers