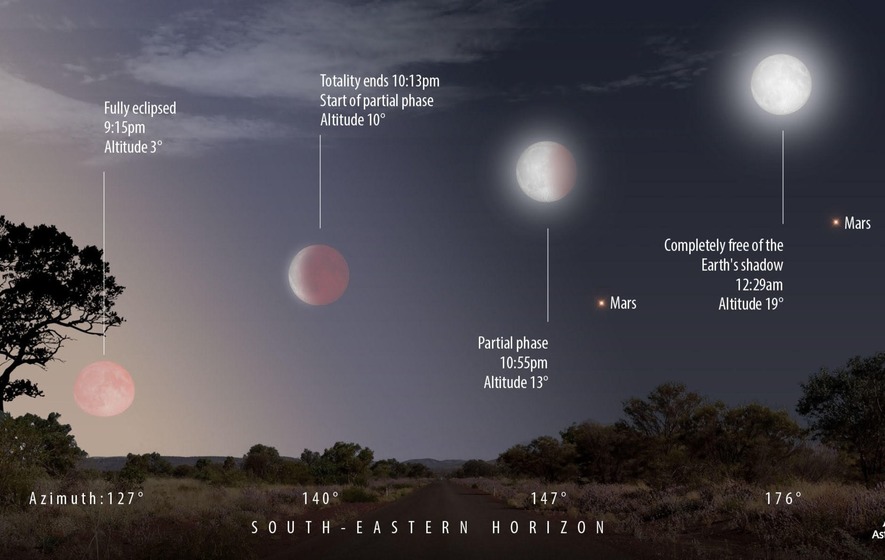 Be very afraid – a “blood moon” is coming, accompanied by Mars, the God of War, shining more fiercely than it has for years.

The longest total lunar eclipse of the 21st century is expected to occur on Friday July 27.

As it lines up with the Earth and sun, the rising full moon will darken and change from silver to rusty or dreadful blood red.

The phenomenon struck terror into our ancestors and is still seen as a portent of doom in some parts of the world today.

In fact it is caused by sunlight being filtered through the Earth’s atmosphere so that red colours predominate when it reaches the lunar surface.

Fiery Mars will add to the spectacle as it appears directly below the blood moon at close to its maximum brightness.

The last time the Red Planet was bigger and brighter than this was in 2003, when the distance between Mars and the Earth closed to less than 56 million kilometres.

As if that was not enough, sky-watchers should get a glorious view of Jupiter in the south-west and have a chance of catching the International Space Station (ISS) sailing overhead.

Robin Scagell, vice-president of the Society for Popular Astronomy, said: “A total lunar eclipse, Mars, Jupiter and the International Space Station. What more could you want?”

He pointed out that the moon’s appearance greatly depended on atmospheric conditions around the Earth at the time of the eclipse.

But dust thrown into the atmosphere by recent volcanic eruptions in Hawaii and Guatemala was likely to paint the moon a deeper red.

“You may see this very eerie-looking deep-red moon rising,” said Mr Scagell. “We’ve all caught on to this lovely word ‘blood-moon’. It certainly will look very strange.

“In early days experiencing a total lunar eclipse would have felt like the end of the world. It’s not surprising people were terrified by it.”

For people in the UK, the “blood moon” will rise in the south-eastern sky already immersed completely in the Earth’s shadow. Moonrise will be at 20.49 BST in London, and 21.46 in Glasgow.

You will have to stay up later to catch a glimpse of the ISS as it moves quickly across the sky from west to east.

Looking like a bright star, it will appear just after 11pm before fading from sight a few minutes later.

Unlike a solar eclipse, both the eclipsed moon and Mars can be viewed safely without eye protection.